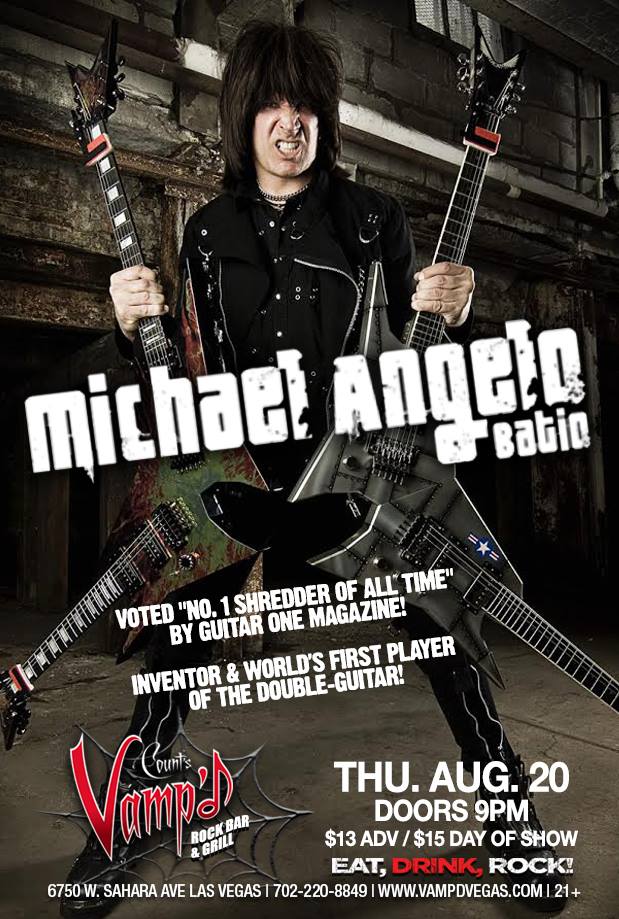 For years, Michael Angelo Batio has been making an impact on the world of hard rock and heavy metal as a virtuoso shred guitarist. Initially known for his role alongside vocalist Jim Gillette in Nitro, it is Batio’s instrumental solo work that has truly allowed him to stand on his own as one of the most talented and unpredictable guitar masters that the world has ever known. 20 years after the release of his first solo album, Batio is still shredding and going strong, with a style all his own and custom-made instruments like nothing played by any other artist!

Vamp’d has really stepped up their game in recent years, booking some major talent, including artists I never would have expected to be able to catch in so small and intimate a rock venue. I admit I have not followed Batio as closely as some, but upon hearing that Vamp’d would be presenting his show, this fan knew he would be there. Curiously, the show did not feature an opening/support act, nor was there a good deal of advertising as there are for most Vamp’d shows. Presumably, this was a last minute addition to their concert roster. 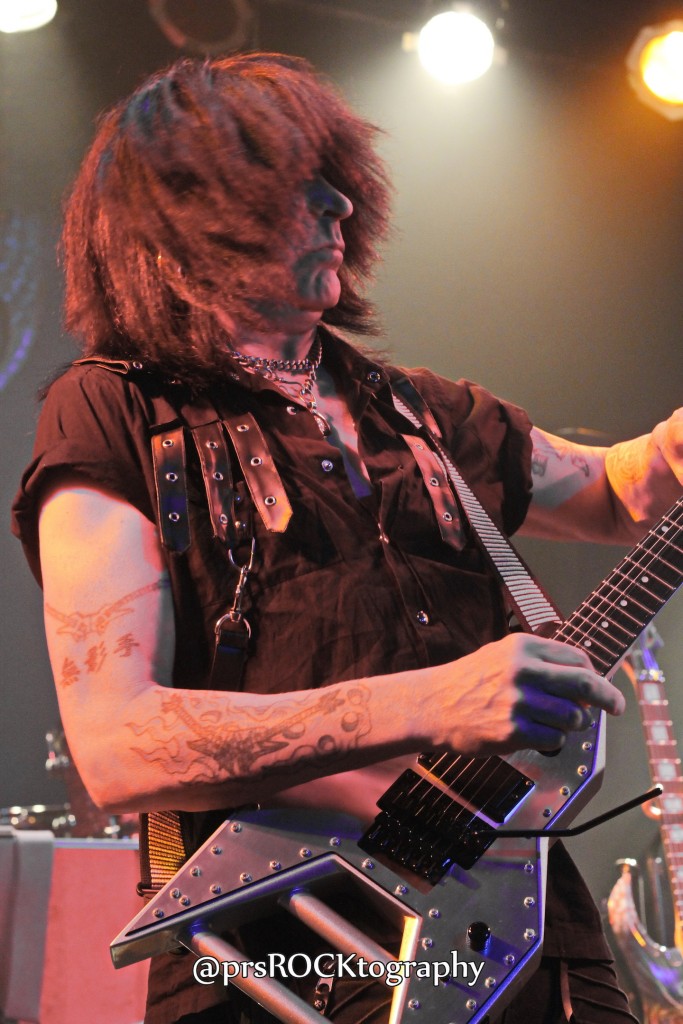 Michael Angelo in action on the live stage!

The crowd for this show was smaller than I was hoping for, but for anyone that did not attend, it was their loss, and a major one. Anyone who has seen Batio in concert or watched video footage of him performing and/or of his custom instruments knows what he is capable of. Loyal, longtime dedicated fans of his work were present at this show, clearly enthusiastic to see one of the world’s most distinctive virtuoso guitarists in action on the live stage, who has continued to make an impact on the music world for decades. This was my first time seeing him in a live concert setting.

Let’s just say that, after having seen this show, I am going to be following this guy a LOT more closely from now on.

Michael Angelo Batio’s performance on August 20 at Vamp’d may very well have taken the lead for “Best Concert of the Year” so far, and given the sheer talent that Vamp’d has booked this year, that is certainly no small claim. This was one of the most unconventional and unusual shows that I have ever seen, in more ways than one. For one, Batio played on stage by himself with no backing musicians; all other instrumentation was programmed, and accompanied by visuals on two television sets on the stage. Though I was skeptical of this arrangement, it did end up working out for the best; this allowed Batio to be the star on stage with no one else to hog the spotlight. The visuals also lent themselves well to the subject matter of the music at hand. 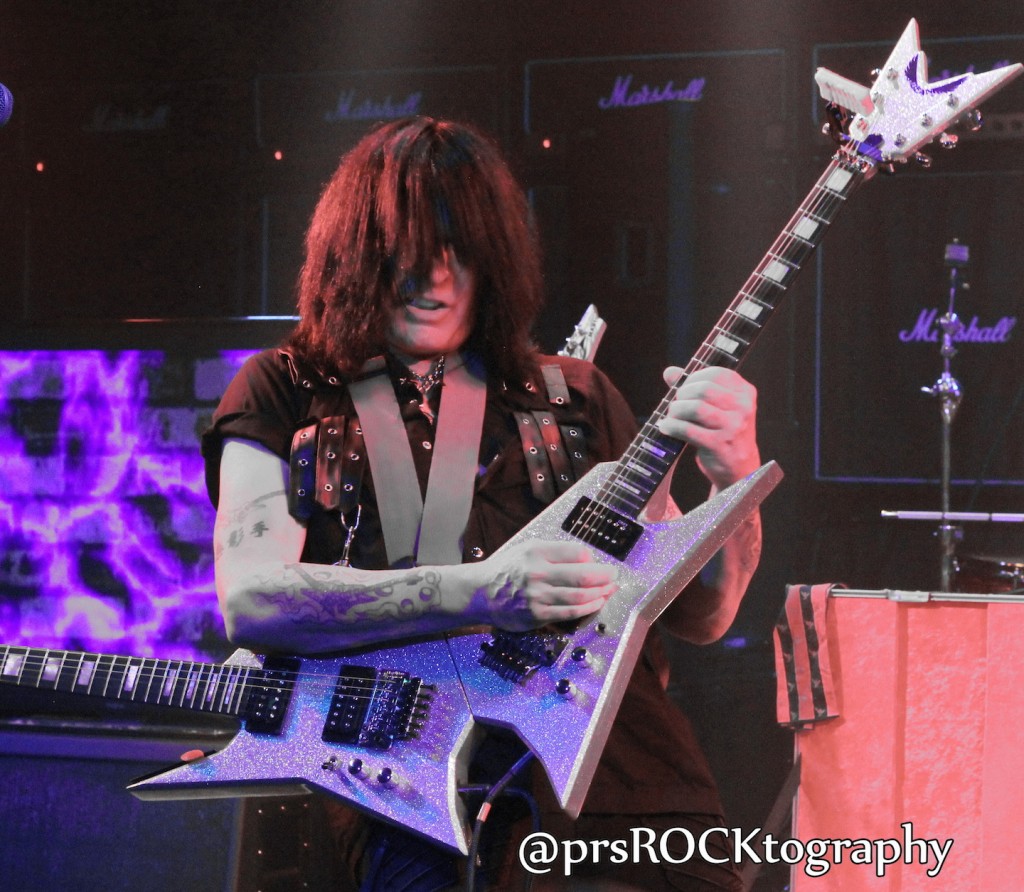 The show was entirely instrumental, as the majority of the material on Batio’s solo albums is. Between pieces of music, Batio would entertain the audience with stories of his rise to fame and meeting musicians that he admired, and was in many cases, equally admired by. When you consider that this includes guitarists like Kirk Hammett and Eddie Van Halen, that definitely speaks for Batio’s abilities as a shredder! We even got some humorous moments focusing on Batio’s time growing up and his views on music and guitar playing around the world. Typically at a show, I am bored after a few minutes of between song banter. But Batio’s stories had the audience in stitches (who amongst us cannot relate to the stories of becoming a musician to get women?) and said tales were especially interesting to hear based on some of the company he has been in over the years, in his world travels and tours.

But no description or commentary on a Michael Angelo Batio concert would be complete without the most important aspect – his PLAYING. Never, in all my life of attending concerts and rock and roll shows, have I ever seen anything like this. This night was something of an awakening for me; Batio is more than just a “good guitarist.” Throughout the show he played a number of custom guitars, including one of his infamous “double” axes for one track. But how he actually played them is what made this show stand out. You have seen your standard rock guitarist, playing in a typical manner of plucking the strings with the right hand, and fingering the strings underhanded with their left. Um, yeah. Batio more or less says “fuck that” and throws the rules of conventional guitar playing out the window. His hands move around wildly like a seizure victim, yet said seemingly awkward movements are actually part of intricately planned playing that has taken him years to master. Remember how I said he was playing one of his custom made “double" guitars? I forgot to mention that he was playing both parts of the guitar AT THE SAME TIME. Reviewing this show is a challenge because my words are simply not going to do his playing style justice; his unconventional playing method is like nothing I have ever seen before. In terms of sheer musical talent and guitar playing ability, this show set for me a new standard I never even knew existed. Prior to last night, I did not own any Michael Angelo Batio records, and had only heard and seen him in brief musical excerpts and YouTube videos. It is highly likely that by the time you read this review, I will be in the process of adding more of his work to my growing music collection. 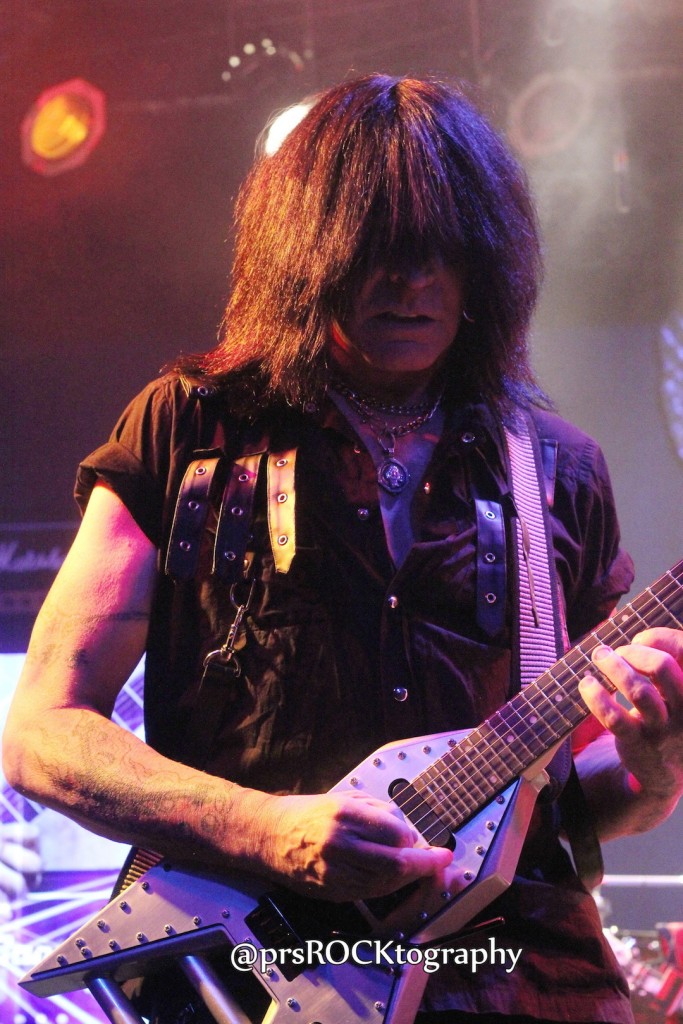 Doing things on a guitar no one else can!

But another question you are likely asking yourself is “what did he play?” Music-wise, the show was comprised of a mixture of his own instrumental compositions, as well as musical tributes to other bands/artists/guitarists. This included medleys of songs by Ozzy Osbourne and Pantera in tribute to the late guitar greats Randy Rhoads and “Dimebag” Darrell Abbott. Even Metallica got some love! Batio’s own compositions beautifully demonstrated his musical prowess, but it was these “tribute medleys” that impressed me most of all; he was able to expertly pay tribute to some of the best musical artists in the hard rock and metal world, and still find a way to put his own twist on them! Closing out the show was a pair of encores, including a cover of the Deep Purple classic “Burn” and an Eddie Van Halen medley that was even more surprising than expected. Batio was even good enough to hang out after the show, signing autographs and taking pictures with the fans; despite his unrivaled musical talents he is a humble human being with no shortage of love and respect for his fans.

Michael Angelo Batio absolutely rocked the Vamp’d stage in a show that was anything but ordinary. Every now and then, an unexpected musical event occurs that absolutely rocks your world and completely changes the way you look at music. Batio’s performance, one of the best this rock and roll fan had seen all year, definitely fell under that category. Easily one of the top rock and roll shows Las Vegas has seen in 2015, this virtuoso shredder has beautifully demonstrated that he is not leaving behind the music world anytime soon. For anyone who is even remotely a fan of rock and roll guitar, witnessing Batio live absolutely must be added to your bucket list. And if you have seen him already, see him again! Highest recommendations for this show; the man must be seen in action to be appreciated.