Home›Features›The Beatles - A Look Back at Let it Be, the Film!

The Beatles - A Look Back at Let it Be, the Film!

The Beatles may have broken up nearly half a century ago, but Beatlemania will never die. And for this flashback review, we are going to take a look at a "lost" release from the band, Let it Be (the movie, not the album). 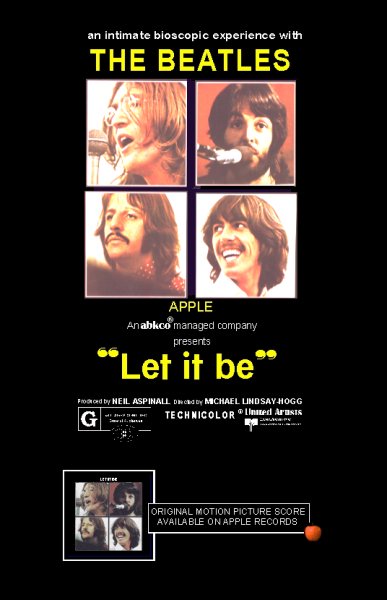 The Beatles final film was 1970s Let it Be, released concurrently with the album of the same name.

The film was released in May 1970, not long after the album of the same name (although the movie itself was actually filmed back in January 1969). This was the fifth and final movie release from the band, and was an attempt by the group to return to the roots after increasingly complicated and complex musical projects. As of January 2016, this is the only Beatles film that has not gotten an official home video release on a modern format, likely due to the negativity featured within the movie (although said negativity was actually a fairly accurate picture of how shaky things were within the band at the time).

Let it Be is an odd mixture of rehearsal and recording footage, very cold and sterile, with no narration or interview clips whatsoever. This is a far cry from the band we saw in the earlier films; here it is clear they are at odds with one another, and that creative differences have made it difficult for the Fab Four to get along with one another, let alone create music. The latter portion of the film is devoted to an impromptu rooftop concert, which has since gone down in Beatles lore as one of their last great moments together as a band, interspaced with mixed reactions from people on nearby streets.

It is ironic that Let it Be, a project designed to get the band back to their roots and reawaken as a band, was more or less the final nail in their proverbial coffin; the group had already disbanded and gone their separate ways by the time the movie hit theaters and the Phil Spector-produced recordings from these sessions were released as the album of the same name. For what it is, despite the tension that is present throughout every frame of the movie, the group did manage to create some fine music. The footage in the film is not limited to songs that ended up on the accompanying album; you can see a number of other random pieces being performed and rehearsed in the movie, not the least of which being a rockabilly medley of sorts. A few songs rehearsed here would actually end up on the Abbey Road album, recorded following these sessions.

It is a bittersweet moment and definitely the beginning of the end for the band. But that does not mean Let it Be should be avoided. If you have a chance to view the film in some shape or form and are a fan of all things Beatles, this one provides an interesting look at the band’s latter days. Just don't come in expecting "feel good" cinema; their fifth and final movie is anything but!