Home›Movie Reviews›Carrie - The Horror Classic Finally Gets its Just Dues on Blu-ray Disc!

Carrie - The Horror Classic Finally Gets its Just Dues on Blu-ray Disc! 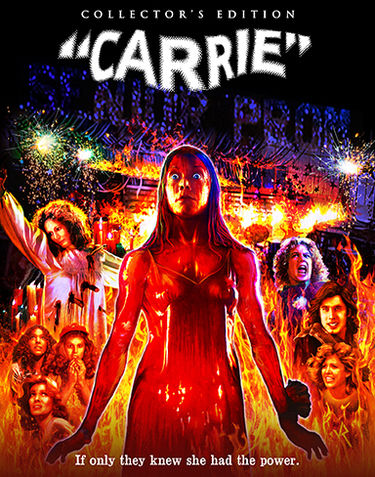 Carrie is based on Stephen King's novel, and is directed by Brian De Palma (Scarface). The film, originally released in 1976, stars Sissy Spacek (Coal Miner's Daughter), Piper Laurie (The Hustler), Nancy Allen (RoboCop), Amy Irving, William Katt, and John Travolta, in one of his earliest feature film roles. The film was scored by Pino Donaggio.

Carrie White has it tough. At her high school, she is regularly tormented by the popular, prettier girls, who see her as a weird outcast. Things are no better at home, where she receives ever worse torment from her mother, a religious fanatic. Following a humiliating experience in the locker room, Carrie begins to discover that she possesses a strange power to move objects, one her mother is convinced comes straight from the devil. When the bullying class’ torment of Carrie lands them in detention, they begin plotting the ultimate prank against Carrie for the senior prom… unaware of the deadly power that she now possesses.

It has been four decades since Carrie was unleashed on unsuspecting audiences, and the world of cinema certainly has not been the same since. The movie launched countless careers on both sides of the camera, and perhaps most importantly, absolutely polarized and shocked its audience. There have been subsequent attempts to remake Stephen King’s classic story for the big screen, but none of them have ever come close to this Brian De Palma adaptation. This film marked the beginning of an era; it was Stephen King’s first novel, and the first visual adaptation of one of his stories.

An original advert for the film around the time it was first released.

Someone coming to view Carrie expecting a bloodbath throughout is going to be disappointed; De Palma’s film is really anything but. The movie largely plays more like a character driven drama than a horror film, but all of this development just serves to make the now iconic climax all the more memorable and impactful to the audience. Portions of the film seem dated these days, but it does not stop the finale and its aftermath from leaving a lasting impression. Even though this was the first film adaptation of a Stephen King story, it remains one of the best. In fact, no other attempt at bringing Carrie to the screen has even come close.

The film is brilliantly cast. Sissy Spacek is ideal as the titular character, forced to endure torment at school and at home alike; the opening shower scene is a shocker for the ages, and this and nearly every other scene remains effective all these years later due to how Spacek handles the material, regardless of what befalls her. The “home” scenes are equally effective due to Carrie’s fanatic mother, played brilliantly by Piper Laurie, in her first big screen acting role in 15 years. She is over the top in this role and holds absolutely nothing back; Spacek and Laurie were both nominated for Academy Awards for their performances here. 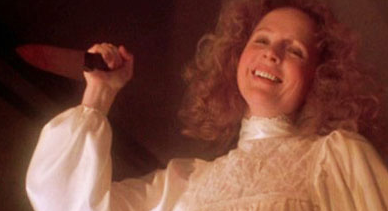 Piper Laurie plays Carrie's religious fanatic mother, in a performance that was nominated for an Academy Award.

Of course the supporting cast fares equally well; a popular story behind the making of the film is that Brian De Palma and George Lucas were doing a “joint audition,” with both directors casting films of their own at the same time (Lucas was looking for actors to appear in Star Wars). Nancy Allen steals the show as the lead “bad girl” in the film, and Amy Irving does well as a bully turned friend of Carrie who wants to help her to become more social in the school scene. A young Edie McClurg (best known for her roles in John Hughes films of the 80s, including Ferris Bueller’s Day Off) can be seen in the film as well, as one of the fellow “bad girls.”

Advertisements for the film stress John Travolta’s presence, and while his role is memorable, it is actually quite brief. He is NOT Sissy Spacek’s co-star as ads, posters, and DVD covers might lead you to believe. This was, however, his first truly noteworthy feature film role, and served as a springboard to him becoming the superstar he would in the years that followed. Just do not buy the film expecting to see a lot of him in it. 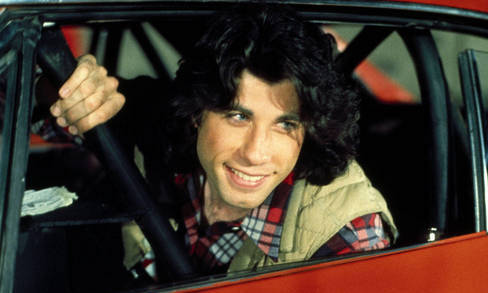 This was an early breakthrough role for a young John Travolta, just prior to becoming a superstar with films like Grease and Saturday Night Fever.

Despite dealing with obstacles like a low budget, De Palma and company deliver a quality film. And while the fashions and technologies on display are horribly out of date, the bullying message is certainly not; the film’s climax when Carrie is pushed too far following a humiliating prank has since become one of cinematic legend and rightfully so. If you want to experience the definitive version of Carrie, this 1976 film is by far the best; terrific performances, memorable moments, and a surprisingly gripping plot easily overcome the ultimately negligible flaws. 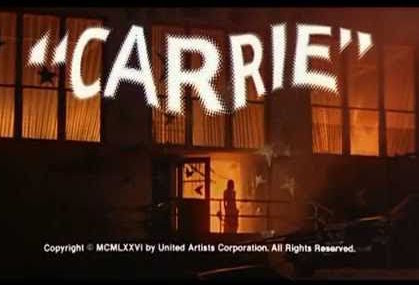 Classic trailers for the film highlighted the now iconic climax.

MGM and Fox previously released Carrie on Blu-ray several years ago, but the disc was maligned as one of the worst high definition releases of a classic film. It was an ugly, murky transfer that did not offer any great benefit to those who already owned a DVD version, and to add insult to injury, did not even include the bonus features from the special edition DVD.

The new Scream! Factory Blu-ray Disc, which streets on October 11, rectifies every single one of these problems. The film received a new 4K scan, which is a revelation when compared to the older BD, which was a disaster on nearly all fronts. Fine detail in nearly every scene is fantastic, yet the film retains a natural look with grain intact. However, audiences must understand that there are limitations due to the nature of the source material, and that this movie is never going to look like it was filmed yesterday. Some scenes/shots remain soft in appearance because that is how they were originally filmed. Any flaws of this transfer are minor, and it has become the new definitive home video version of Carrie to own for these very reasons. Audio fares well; music heavy sequences and highlighted sound effects get across well, and the dialogue is largely clear and easy to understand. Like with the video quality, there are limitations to the audio of a 40-year-old film shot on a low budget, but overall it is safe to say every single fan of the film is going to be happy with Shout! Factory’s efforts here.

The bonus features are fantastic. In addition to having the special features from the former special edition DVD reinstated, there are several new featurettes with cast and crew, including director, casting director, cinematographer, screenwriter, and the actors themselves (although John Travolta is sadly absent). The first disc features trailers for all of the Carrie films (including this one), with the majority of the features appearing on the second disc. Sadly, the supplements are pretty poorly organized, with the old and new features mixed together haphazardly. That said, the sheer variety of what is offered here, from interviews to original TV and radio spots to rare behind the scenes photos and stills, will impress anyone that is a fan of the movie.

Much like Carrie on prom night, this special edition release from Scream! Factory holds nothing back, and has become the new definitive release of this classic film. Even if you already own an older version of the movie, this disc is worth the upgrade in every single way. And with Halloween right around the corner, why not add it to your collection? Absolute highest recommendations.

DISCLAIMER: All images in the review are the property of MGM, United Artists, Shout! Factory, Scream! Factory, and all other associated entities and holders. Images in this review are from Google image searches; they are NOT pulled from the Blu-ray Disc, and do not represent the quality of the product. For promotional purposes only. All rights reserved.