Home›Movie Reviews›Goldstone - Intriguing Crime Drama From the Land Down Under!

Goldstone - Intriguing Crime Drama From the Land Down Under!

Goldstone is directed by Ivan Sen, and stars Aaron Pedersen, Alex Russell, Jacki Weaver, David Wenham, and David Gulpilil. The film is a sequel to Sen’s 2013 film, Mystery Road, though knowledge of the first film is not required to enjoy this installment. The film was released in 2016 in Australia, with some limited American showings in spring 2018.

Jay Swan, a detective, arrives in the town of Goldstone to search for a missing person, where he meets local police officer Josh. Immediately, it’s clear something in the town is not right, with Furnace Creek, the local mine, not being all that they seem. As the time passes, Jay continues the search for his missing person, and Josh must face the facts about Furnace Creek, and their corruption and illegal activities.

Goldstone is a flawed but still excellent crime drama/thriller. Beautiful cinematography and superb performances make it a strong film, even if the narrative gets muddled in a few places and sometimes loses its way. 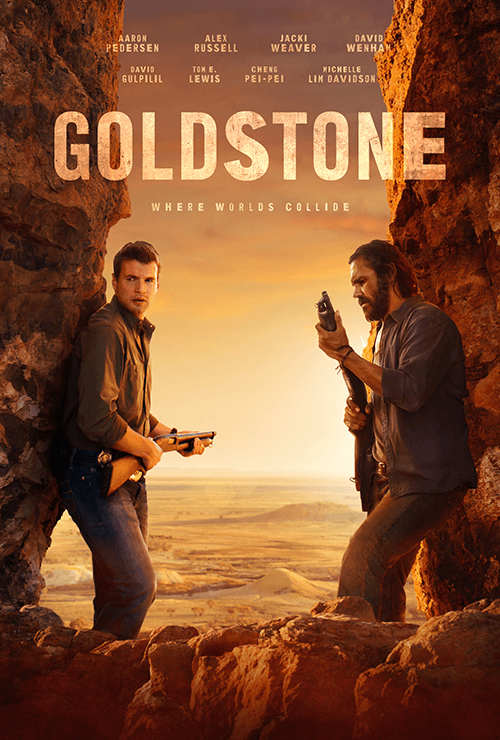 The best thing about Goldstone is the performances of its cast. Alex Russell is superb as Josh, the police officer who has turned a blind eye to Furnace Creek’s activities for years, but slowly comes to realize the breadth of what has been going on in his town. The standout performer, of course, is Aaron Pederson as Jay, who sets out to accomplish his goal in locating a missing person by any means necessary. Supporting cast members are no less excellent, including Jacki Weaver as a corrupt but still cutesy and charming mayor. While the movie does opt for a “slow burn” technique, as things unfold and we learn more about the characters and their circumstances, the film becomes all the more intriguing.

Second only to the cast of Goldstone is the cinematography, which turns the barren desert landscapes of Australia into an intriguing setting, from endless expanses of sand to mobile properties transformed into a makeshift town of sorts. The overhead shots definitely add something to the atmosphere, giving the movie a look and feel of its own. It many ways Goldstone feels like a modern-day Western, and I can’t think of greater praise than that.

There are a few elements that hold the film back from perfection, though. The narrative becomes muddled in more than a few places, and the movie can’t quite find its way at times. A scene between Jay and a traveling prostitute has potential to be something interesting, but it’s never mentioned again after it happens. Josh and Jay both have intriguing story arcs, but the juggling of them never quite works as well as it should. At times the pacing lags, though the end product remains satisfying.

Goldstone, despite minimal flaws, is worth seeing because of its strong performances, beautiful cinematography, and intriguing characters and plot elements. Definitely worth checking out if you get a chance.

DISCLAIMER: Images in this review are the property of their respective copyright holders, including Bunya Productions and Transmission Films. For promotional use only. All rights reserved.