Three men are incarcerated in a mental health facility – a working-class man who believes he’s a superhero, an eccentric and deranged man suffering from a multiple personality disorder, and a man in a wheelchair with strange abilities but brittle bones which leaves him confined to a wheelchair. A therapist tries to convince them of their normality, as their respective family members and acquaintances also want to help and intervene. Is the incarcerated trio simply a case of people with mental disorders, or do they really have powers? And is the city safe from them? 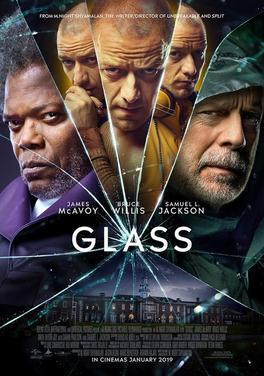 Glass presents some interesting ideas, but it ultimately falls flat more often than it succeeds due to an overlong running time, too many side characters, subplots, story elements, and a sloppy narrative. That said, it does feature some solid casting and good performances from its leads.

The true standout in the film is the always entertaining James McAvoy, playing a man who suffers from a split personality disorder brought on events in his past. In mere seconds, he fluctuates between wildly different personalities, ranging from a destructive and superpowered “Beast,” to someone who sounds like he’s been taking speech lessons from Mike Tyson. He’s the definite highlight of a hit-and-miss film, equal parts fearful and hilarious.

The remainder of the cast fares well too. Bruce Willis is great as a widower father raising a son who sees his dad as a “superhero,” and Samuel L. Jackson plays the wheelchair-bound Elijah, who has a mysterious connection to the other men. When plot twists do reveal themselves later in the film (as is par for the course for an M. Night Shyamalan film), they thankfully flow well and don’t feel like contrived afterthoughts.

Unfortunately, other aspects of the film don’t fare as well. We jump back and forth between three wildly different men, none of whom ever gets the proper fleshing out or in-depth exploration they deserve. Throwing in characters from their own respective lives and pasts only further convolutes the story. It’s a movie which feels simultaneously far too long, yet also feels like a good deal of material may have been deleted from the film in post-production. The film would have worked better if it had been written more directly around McAvoy's character, rather than shoe-horning in so many other elements.

Glass will make for a decent weekend rental when it hits home video formats, but wait until then. Don’t rush to the theater to see it.

DISCLAIMER: All images in the review are the property of their respective copyright holders, including Universal, Blinding Edge, Blumhouse, Buena Vista, and Walt Disney Studios Motion Pictures. For promotional use only. All rights reserved.