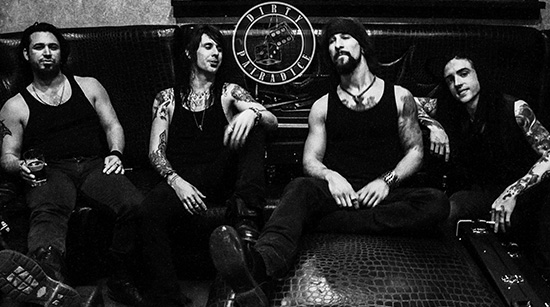 Two nights in a row I witnessed amazing shows from local rock n' rollers, Dirty Pairadice. A quartet who, although their members come from all over, bring a great deal of pride and joy to the Las Vegas music community.
The overall energy these dudes have on stage is just insane. You would think they were performing at the Whiskey A Go-Go with the way you have guitarist Dylan Dice and bassist Ruzz Roxx moving about the stage, completely rocking out, backed by drummer Donny Dececco (who at one point got so excited he threw his stick into the crowd, but had to ask for it back, ha!). The connection they shared with the crowd is simply uncanny, which was proven when vocalist Dallas Williams actually took the phone a fan had been recording the show with, proceeding to tape the crowd from the stage stating to "show some fuckin' love!"
Trying to get these guys all in one spot after their energetic set was a challenge though. Imagine trying to bribe someone like Axl Rose without a bottle for collateral! I was beginning to think that this would be damn near impossible to do, and was ready to conduct a kind of search party... But the wait was well worth it...

ZR: How long have you been doing this?
Donny: (laughs) That was a one cheek sneak!
Dylan: I’ve been doing this since 14 years old man, before I even could bust a nut (laughs) 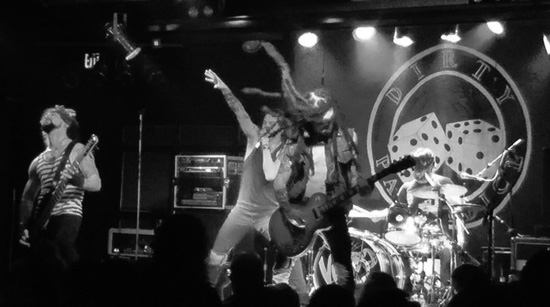 ZR:And how old are you now, because I know it is your birthday?
Dylan: It is my birthday, and I’m 25 years old today, baby! 1988.
Donny:  My father took me to see his cousin go play. He was a drummer. He put me on his lap and put the drumsticks in my hand, I started beatin’ the fuckin’ drums, and I just remembered that. It was prolyphic. I always wanted to be a drummer. I am a drummer. I’m Donny the Duke.
Dylan: He likes a stick in his hand. (laughs)
Donny: Wait, wait, wait… 2 sticks.

ZR: Dallas, your turn.
Dallas: I don’t know, what was the question?

ZR: How long have you been doing this for?
Dallas: I don’t know, we’ve been out here for a good 10 minutes probably. When did you push record?

ZR: Okay, Ruzz, how long have you been doing this for? Playing bass I mean!
Ruzz:  For about 8 months?

ZR:Really? That’s it?
Dylan: He switched from guitar to bass. He’s a badass guitar player too! He’s got the 6 string, ya know, it’s awesome. 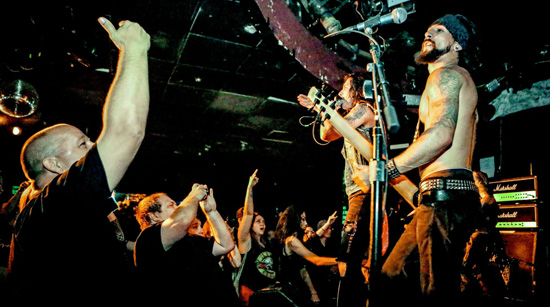 ZR: You  always hear of the rivalry here in Vegas between bands, you’ll hear them say “Oh, this band fuckin’ sucks”, and it doesn’t really help the music community.  How do you guys handle that, or have you run into that at all?

Donny: Well, yeah. Obviously you are going to get that, but the most important thing is to remember: WE ARE A FAMILY.  We all get along together despite our differences, despite our different styles of music. If you’re a musician and you can play your instrument well, you deserve to be in this music community. We’re a family, and we help each other despite our differences.  We move forward. We’re a part of a family here.
Ruzz: The thing with support is that everybody has to stick around for all the shows.  Don’t take your fuckin’ equipment out and leave right after your set is done.
Dallas: BEEEEEEEEEEEEEEEP!

ZR: He has lead singer disease, I can tell. (Laughter)
Donny:  Here’s a joke, how many singers does it take to screw in a lightbulb?
Dallas: One, motherfucker!
Donny: Put the fuckin, uh, light in the socket and the world will revolve around ‘em.
Ruzz: As the world turns.
All:  So, These are the days of our lives.

ZR: So, what  influences do you guys have?
Dylan: Guns n Roses, Pantera.
Donny: The Beatles.
Dallas: Every once in a while I listen to some Bone N Thugz.
Dylan: AC/DC, Zeppelin, all the good shit you know.
Ruzz: For the most part it’s rock n roll.

ZR: So, there is an obvious 80s influence here. What do you guys think of the grunge scene, Kurt Cobain, and such?
Dallas: We don’t use that name.

ZR:Why not?
Dallas: What do you mean why not?

ZR:Why not…?
Dallas: Well, he should’ve fuckin killed himself before he killed rock n roll. That’s why not.
Dylan: The fuck are you saying? I’m sorry man, but I love Nirvana.
Ruzz: No one likes hair metal anymore.
Dallas: That’s when rock n roll died. Period. If grunge never came around with what they were saying ‘I hate my daddy, I wanna do dope because I got nothin’ better to do, because I can’t play sports, because I can’t fuck bitches.’ Grunge came around because kids turned weak.
Dylan: 80’s was the shit.
Dallas: 80’s was the shit. 80’s was about running around having a blast, fuckin people, kickin it on the beach, racing cars, motorcycles, fuckin around. Rock n roll is ROCK N ROLL. It’s called rebellion. It’s not called being a recluse in your fuckin closet smoking  fuckin’ heroin. It’s different. I respect him. I respect him for who he is and what he did. He was a talented individual, he spoke to people, and people dug it. I get it.  Totally respect him. Dude is world famous. Dude is somebody.  You gotta respect him but it doesn’t mean I like him.

ZR: I can respect that. So, how did you 4 meet and decide, “This is what we want to do”?
Donny: They already had the band, Dylan and Dallas.
Dylan: We met actually through our old drummer, Moyer, and it’s crazy. Me and Dallas actually got into a fist fight the first night we met because we were wasted.
Donny: All over a girlfriend.
Dylan: Yeah we were wasted, and we didn’t even remember the next day, we woke up, Dallas called me up and was like, ‘Dude, do you really care?’ and I was like ‘No, I don’t fucking care man, let’s play!’, and we fuckin' played right after that.

ZR: So, who won that fist fight?
Donny: I think Dylan won. 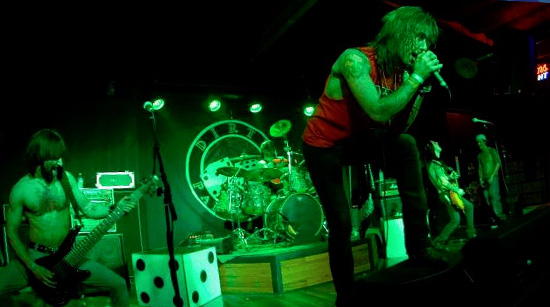 ZR: So, how did you guys, Donny and Ruzz, come into the mix then?
Donny: I met Dylan when he first moved to Vegas with his girl. I was in a cover band and we had this really horrible bass player and this funny singer. A very funny singer.
Dylan: This dude bullshitted his way through gigs.He was THAT bad.
Donny: Well, he was a heroin addict,so...yeah. But when they first started the band I was really interested, because I knew how good of a talent Dylan was. We’d done a show at the Railhead, and I knew how great he was and he told me about it with the drummer Moyer, and I thought fuck man, I’m going to be in this band sooner or later. The drummer ended up leaving and Dylan was like ‘Yo, I know this guy Donny. We are going to be fuckin’ great.’ Dylan, talk me up!
Dylan: It depends on how many beers he’s had!
Donny: Let me help you out, ‘Hey man, I know this guy Donny, and he can play!’
Dylan: Donny can play his ass off, and I fuckin’ told them this is the guy we gotta fuckin’ get. I brought him in and they were like,"Damn this mother fucker can play. We had like 10 guys come in and they either couldn’t play or they came in on heroin. One guy came in on heroin, one guy came in on crack, and we were like ‘Donny, is the choice!’

ZR: So, then Ruzz, where do you mix into them?
Donny: He was one of the originals.
Ruzz: Me and Dallas came up with the name, actually. I hadn’t been in a band for about 3 years, and it’s magic with these cats. It’s magic. Every show we play is better than the last. Every song we write is better than the last. I jumped from 10 years on guitar to 8 months on bass, you know, it’s whatever. I trust these guys. They’re good musicians, and it’s a lot of fun making music with these guys.
Donny: This mother fucker went out and bought like a 2000 dollar rig not even having the gig yet. We still played like a whole 8 months without Ruzz, but he was like ‘Fuck yeah man, I got my rig!’ and we were just like ‘Godammit dude. We have to give him a serious look.’ It’s always an upward progression. We're a family.

ZR: Where did the name derive from?
Ruzz: (laughter) Us being high!
Dallas: Marijuana!

ZR: I was gonna say did it come from anything or did you guys just…?
Dallas: Yeah, just marijuana.(laughter)
Ruzz: Things just happen, let’s leave it at that 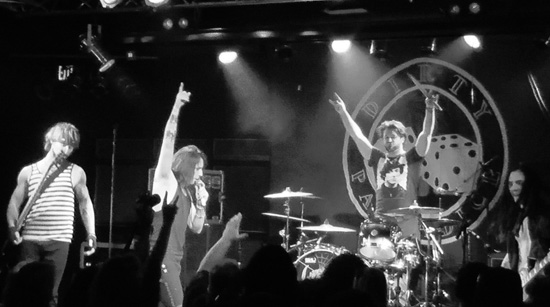 So, there you have it! These guys are beyond amazing. Absolutely fun to hang out with, and underneath their badass exterior , they are a bunch of sweethearts. If you have the opportunity to see them; do it! We here at ZRockR expect great things from them! Lots of love to DP! Look for them around Vegas and also down on LA's Sunset Strip!

The Purple Hart of the Rainbow- ...