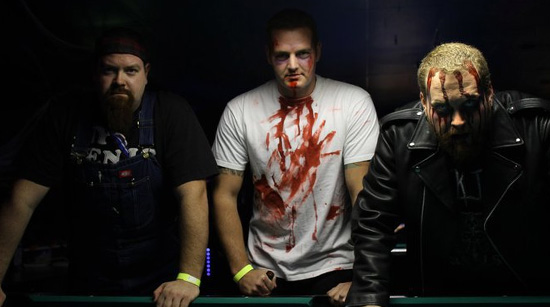 As some of you may know, the Las Vegas community lost a huge supporter of the local music scene, Mike Schrimshaw, and some awesome local bands pulled together to raise funds for his family at local bar and venue, the Freakin’ Frog. One of these bands was Xomby; a local punk band fronted by the raging vocals of A.D. and backed by bassist Dave and drummer Eric.

This band proves that punk isn’t dead, it’s just been hiding out in your local dive bars, bringing the piss and vinegar back to the musical taste buds of those willing to look for it.

I was highly impressed by the way the three members of this band worked together, doing fast paced riffs and the hardest hits on a drum kit I have ever seen in this town. Closing the show with “The Man Song” from Orgazmo, a film by the creators of South Park, the crowd went absolutely wild, filling the bar in a way to where I could barely even see the band performing, and I was close to the stage!!!

If you’re a fan of bands like the Buzzcocks, Misfits, and Social Distortion, then be sure to give them a “like” on Facebook to find upcoming events of theirs. This is NOT a band you want to miss.

What's that sound rising up from the ...