Avenged Sevenfold – Hail to the King 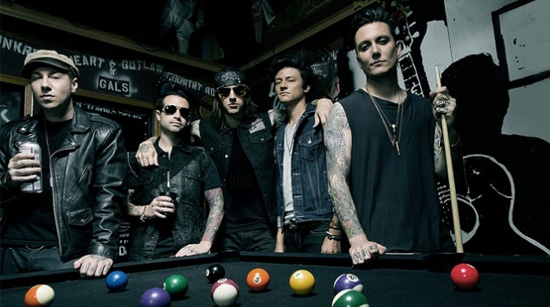 I really want to LOVE Avenged Sevenfold. I do. I’ve been a fan since 2003 when I first heard Unholy Confessions. And I saw possible big things happening for them. I just didn’t know how big. Now they’ve been one of the “big boys” since 2005 with the release of City of Evil. That of course meant some stylistic changes to their music, and vocals. And they’ve been doing that ever since.

Everyone knows about the 2009 death of their drummer, The Rev, and the following Mike Portnoy fiasco (after providing great drumming for the 2010 album Nightmare).

This new release, Hail to the King, is the 1st full new material without anyone writing involvement from The Rev. There was no question they were going to move on. But here we are, 6 albums into their career. NO LONGER a new band on the rise, but a band that’s been growing consistently for a decade. What direction could and would they take after Nightmare? Well the answer is clear.

Let’s make ” The Black Album“. Let’s BE Metallica for this generation. Of course that’s the goal for basically any metal band. And while many bands take influence ( Shadows Fall), and some bands take inspiration too far at times ( Trivium)… there’s also blatantly ripping off and sounding exactly like.

Shepherd of Fire is Enter Sandman. Clearly. Obviously. Blatantly. The band said themselves they’d been taking notes from that album, as wells as others, and who doesn’t? But seriously. That entire intro into the main riff and groove. It’s Enter Sandman. This Means War is another absolute blatant attempt at reproducing Sad But True, even down to the vocals. Crimson Day AND Acid Rain? Nothing Else Matters. Planets mildly channelsWherever I May Roam. Requiem AND Acid Rain dwells in The Unforgiven.

The songs that are “original” on the album, are still copying the patterns and overall vibe of 90’s Metallica. Especially in the drum department. The standard 4/4 mid-tempo on just about every song. Which isn’t a problem any other time, except in this scenario, where you know why exactly they did it. The unfortunate thing is, as big as Avenged Sevenfold is now, I don’t think this album will take them any further in popularity. They’ve hit their peak already. And no matter how you try to rewrite a perfect album… you’re not going to sell 15 million+ from it.

I want to LOVE them. But I only like A7X, and it’s going to stay that way. I’ll listen to everything they release, and I know it’s going to be alright. But they’ve never blown me away and I know they never will. This album to me seems like a step-back and not forward.