The Eye of Weiss 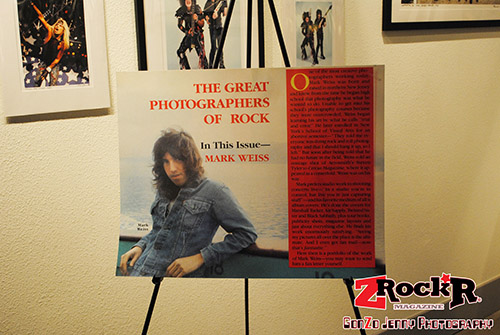 When I was told I would be interviewing Mark Weiss, I about shit my pants. To those of you that do not know who he is, he is the leading photographer for pretty much everything rock n roll over the last 30 years. We all have his work in our collection. If you don’t, you have some pretty boring musical tastes and need to expand your library.

Twisted Sister, Motley Crue, AC/DC, Kiss, Ozzy, you name the band, he has probably photographed them at some point. Dude is a pinnacle of awesome stories of the glory days gone by in rock n roll. The good old days. The days when the rock stars would let you take pictures of them doing other things besides on the stage, and were OK with it. 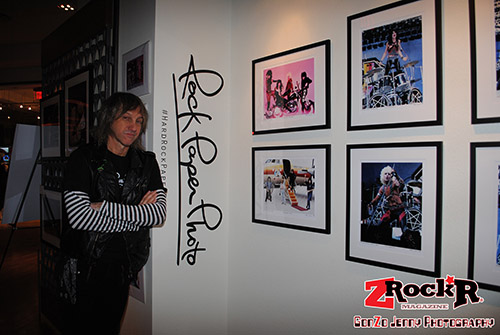 I first walked up on him taking pictures in front of his window at Rock Paper Photo inside the Hard Rock in Las Vegas with his last appointment. I joined in, took a few pics, but was more interested in picking his brain. Gaining valuable knowledge into the industry, I sat with him for only a short 30 minutes, but I gained an entirely new level of understanding about photography within the music industry. We swapped stories of rock star encounters, and even had a small conversation about Vince Neil, whom I have worked for before, and he is currently working with again, now. 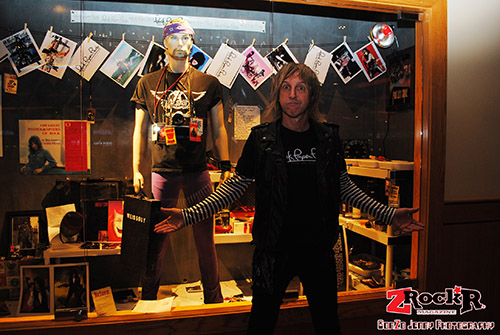 One of the questions I asked him was why he chose to get into photography. He said, “I wanted to be a rock star, but I didn’t have any talent.” When he said that, it all made sense. Why does anyone get involved in the music industry and NOT be a rock star? Well, like he said, they have no musical talent. But, if it weren’t for the untalented people out there that had an overwhelming love of music, we wouldn’t have people such as Mark floating around in the front press stall of the stages of America. We need those people. They are the ones that show us what really goes on, puts us in the front row at every concert we missed or wished we could have gone to. 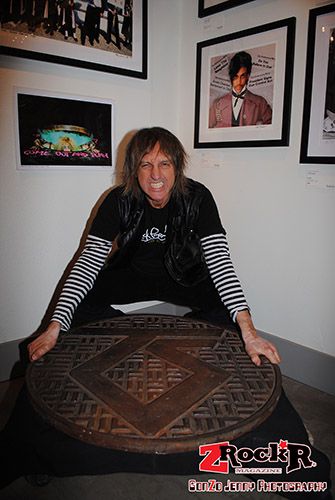 After sitting and talking for a while, he wanted to have some pictures taken, so I grabbed my camera and we headed to various spots of his showroom, and back out to the front window. I learned a few things about my camera I didn’t know before, and was one gigantic shivering nervous wreck the entire time. As someone who has always wanted to be a big time photographer, and has tried several times at it, this right here was the moment I’ve always wanted. I wanted to be this guy in the early 90’s. Can you even imagine all the shit he has seen through his career?

After the small photo shoot inside the Hard Rock, we sat down and looked at the pictures together. He asked if he could keep my pics because he actually liked some of them, and asked who should get the photo credit if and when he puts them up somewhere. I about flipped my shit right then and there, but I didn’t. 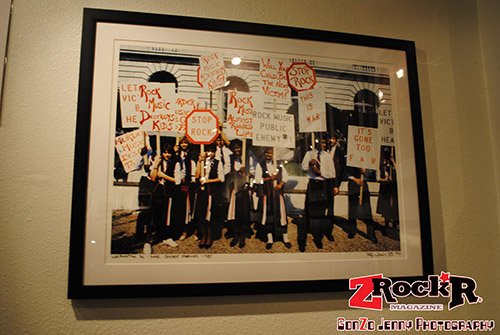 It took me about 20 seconds to respond, and I could feel him looking at me, waiting for an answer. I calmly told him, GonZo Jenny and Zrockr Magazine. He took my SD card, and now, on the desktop of the music industry’s leading photographer, there is a folder named GonZo Jenny, full of my pictures. I wonder how long that folder will sit there, right smack dab in the middle of his screen? Only Mark knows, but it sure did make me walk with my head held high back to the parking garage, overly proud of myself.

If you have an opportunity to check out his work, google his name, find him on facebook, or go directly to his website. You will be surprised just how much of his work is spread thru the music industry as a whole. You will gain a look into rock n roll history through the Eye of Weiss.

For More on Mark Weiss check out his website at: http://www.weissguygallery.com

Mark can also be found on Facebook at: http://facebook.com/MarkWeissPhotography

If you are interested in purchasing a print of Mark's work please go to his website or stop by Rock Paper Photo inside The Hard Rock Hotel in Vegas or go to: http://rockpaperphoto.com/