Home›Reviews›Upon A Broken Throne – You and What Army?!?

Upon A Broken Throne – You and What Army?!? 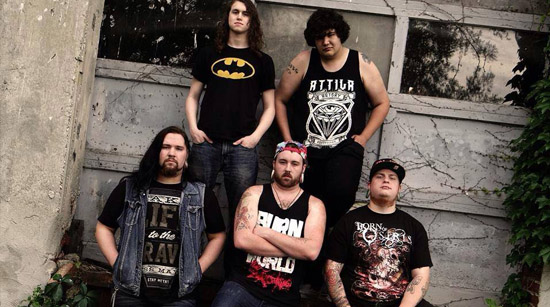 After a long time of listening to hardcore, metalcore, deathcore and every other kind of “core” genre out there, it’s hard to find something that hasn’t been done before. I’m so used to those constant palm-mutes and muffled growls with a couple solos and double bass drums that “completes a song that I had such a sigh of relief recently when I picked up the album You and What Army from Upon A Broken Throne. After opening for big names like Born of Osiris, The Acacia Strain, Iwrestledabearonce, and my personal favorite Casino Madrid these guys have been a somewhat sleeper in the metal community, but with their freshmen record out I wouldn’t be the least surprised if they wake up the an entire scene with this well-needed release.

From front to back, You and What Army gives me a sense of being in a battle. The intro track, Eye of the Storm, starts the album with the sound of a rainstorm and a soft guitar, but this is just a calm before a brutal takeoff. As soon as the next song Tides comes in you find yourself banging your head uncontrollably and giving off a sort of an evil grin. With solid drums and guitar, then one of the most distinct growls I’ve heard in a while this song shows what’s to come on the entire album. My favorite track on the album is the next song, My Wrath. Leading in with a calming guitar it’s one of the only breaks the album takes. The guitar riff picks up the distortion and the drum and bass come in hitting on every note change, then a synth distortion comes in and all insanity breaks loose with a scream that leads all the instruments into a breakdown that I can never stand still during.

One of my favorite things about this album is the style of the production. I’m a sucker for electronics over vocals and You and What Army is full of it. It gives the lyrics a sort of break up that goes along with the instruments so well. In the track Drop Dead Gorgeous it mashes with the drums perfectly. There’s just something about chopping up a scream and throwing it over double kick from the drums that makes me lose my mind!

From the kick that brings you into the Genocide, to the last “eeeoow!” scream in Legion, the rest of You and What Army doesn’t fall off the path of technical brutality one bit. The energy of the album makes me want to get on a plane to Illinois as soon as possible so I can experience Upon A Broken Throne live, but after hearing what they’ve produced I wouldn’t be the least bit surprised to see these guys getting on the road soon with some big acts nationwide. With the roster they’ve backed up so far I know they’re ready for it. Check out the track More Than Machine and go buy the album through iTunes, Google, or Amazon. Your ears will be pleased!

Photo credit: courtesy of and © Upon A Broken Throne- all rights reserved