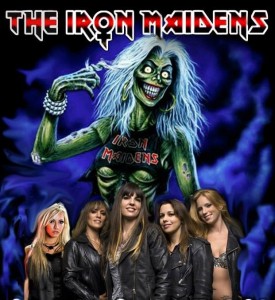 For the first time in a long time, there was no standing room inside of the best rock club in Vegas, Count’s Vamp’d. From the front of the house, to the bathrooms in the back, and out on the patio as well, people were literally shoulder to shoulder. They stood around, in their band t-shirts, sipping The Trooper beer, waiting for a tribute to their favorite band to hit the stage.

We’ve all heard of the countless tribute bands that exist in this world. Usually consisting of 4-5 middle aged guys, talented or not, getting on stage, and playing a band’s classic anthems, it gets kind of boring after a while.

Once in a blue moon, though, a band hits a stage before your eyes that completely blows the “boring” factor out of your mind. For myself, and I am sure quite a few other folks in the crowd, that band was The Iron Maidens. Now, I am skeptical of ANY Iron Maiden tribute simply because of the complexity of the music, but I was especially skeptical as to whether or not these ladies could really pull it off. I was completely blown away by these women.

After forming in 2001, The Iron Maidens have taken stages around the globe by storm with their performances. Comprised of Kirsten Rosenberg (Bruce Chickinson), Courtney Cox (Adriana Smith), Nita Strauss (Mega Murray), Wanda Ortiz (Steph Harris), and Linda McDonald (Nikki McBurrain), they embody on the stage everything that screams Iron Maiden. From the stage set up, which included mascot Eddie from the Somewhere in Time album, to the outfits, to the sound itself. If you have ever seen them you would probably agree that you could literally close your eyes, and imagine yourself at an actual Iron Maiden concert.

If you haven’t seen them then I suggest two things: 1. Don’t keep your eyes closed for too long. They are too amazing to miss even a few moments. 2. Go fucking see them.

Any fan of Iron Maiden, young or old, newer eras or older ones, can expect to hear everything from “Two Minutes to Midnight” and “Die With Your Boots On” to “The Trooper” and back again. I am excited to see them next time they hit the stage here in Las Vegas. Keep an eye on their tour dates and go check out these ladies for yourself:

One response to “The Iron Maidens”