Home›Reviews›Powerman 5000 - Builders of the Future

Powerman 5000 - Builders of the Future 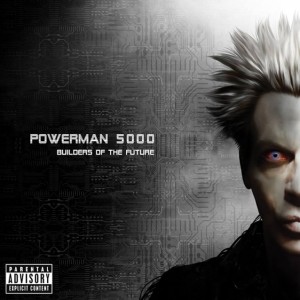 It's been 4 1/2 years since their last studio album (not counting their 2011 covers album: Copies, Clones & Replicants)...

I've been a fan since 2000. You could say one of their biggest fans. So I've been anxiously awaiting all this time for something new.

No intro, no interludes. This is the 1st ever PM5K album that is purely just music from start to finish. 10 songs. 10 songs that define their entire career. A little something from everything. But completely in the style that has made them the most well known.

"Invade. Destroy. Repeat." is the starting track, and could basically just describe the album as a whole and what you're going to do with it. By far one of the most, if not THE most relentless Powerman song. No doubt it'll get a live show started properly.

"We Want it All" is very groove-orienated. A solid mid-tempo rocker. Straight-up.

"How to be a Human" is the 1st single released from the album, and has been played live for atleast a year and a half now. Classic electro/dance metal ala "When Worlds Collide" and "Super Villain".

"You're Gonna Love it, Whether You Like it or Not", seems to me, anyway, that Spider is letting everyone know that the band is where most fans always wanted them to be, and now that the sci-fi industrial metal is back, there's no reason for those abandoned fans to keep their backs turned. (in my opinion, the band never had a low point, musically)

"Builders of the Future" is a little something different, yet it's not. It reminds me of "Horror Show" from the last album, turned up a few notches. A straight up raver of a tune, with some of that original hip hop vocal style that started PM5K in the first place. It's a nice surprise. Skrillex remix just in time for EDC??

"I Want to Kill You" is by far the biggest surprise of the album, and quite frankly, one of my most favorite songs they've ever done. It's an acoustic tune somewhat in the vein of Nine Inch Nails' "Hurt" if Portishead got a hold of it, with a hint of a western feel. It's new for them, and it sticks out amazingly. The only song I could compare it to of theirs previously would be "The Future That Never Was", but even then, it's still very different.

"Live it up Before You're Dead" is the same as above. It's just high energy fun. Plenty of groove... kinda like... Bringing motherfucking bombs to a fucking knife fight.

"I Can't Fucking Hear You" is my least favorite song on the album, but it's not bad by any means. It's one of the more unique songs they've ever done. There's a lot of melody going on in the background and with the vocals.

"Evil World" has a touch of dubstep influence. But if you're scared of that statement, don't be. You'd have to hear it to know what I mean by touch and influence. It's subtle. But it's there. I certainly enjoy it. It closes the album well. Just in time to hit repeat and hear it all again.

All in all, is it the "BEST" Powerman 5000 album? I would say no. And I think many would agree. Is it as good as anything they've ever put out? Yes. I think it follows suit in their discography. It sounds exactly like what should have come after 2009's Somewhere on the Otherside of Nowhere and while I wish there were atleast a couple more songs, I'll never complain. In the entire history of PM5K's music, I can tell you that there are only 2 songs that I don't care for. 2. Out of atleast 150 songs. That's not a bad ratio.

Spider and company are still completely in top form. Perhaps having a new member or 4 on every album keeps the ideas fresh and flowing and inspiring. I've always been a fan of the left-turn tracks (or albums) that the band puts out.

You'd never guess there were 15 years between Tonight the Stars Revolt! and Builders of the Future, but strangely, there is. Much of that million plus fanbase from that popularity peak has dissipated for whatever reason. But this band is still very much alive and always has been. Hopefully some fresh ears get to hear this stuff and what they've been missing out on.