With his new role in Chiodos and being the lead of Seattle based rock band Fall of Troy, Thomas Erak has been busy with recording Chiodos’ new album Devil and taking the album on the road on the Crowd Surf America Tour. Fortunately, he was able to hang out with us at their stop in Las Vegas at Hard Rock Live to talk about the new album and becoming a part of the band. 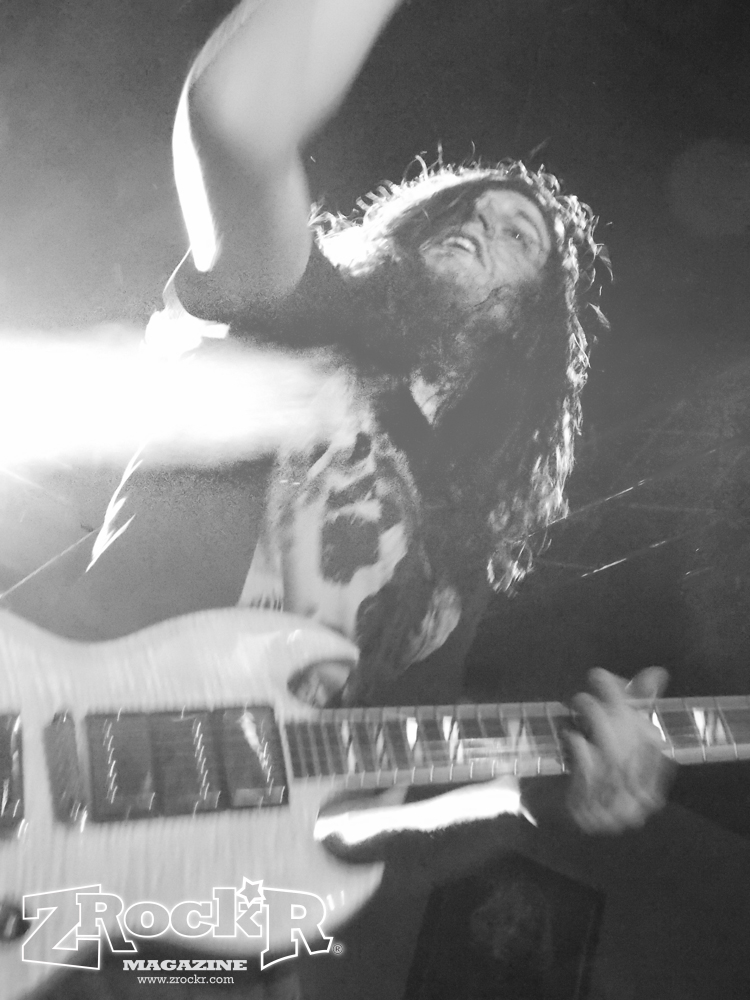 ZR: How was it transitioning from Fall of Troy to Chiodos?

Erak: Pretty seamless, actually. I’ve known them for so long. Fall of Troy’s first tours were with Chiodos, lots of them, and we’ve kept in touch over the years and everything. Fall of Troy split up and I wasn’t really doing much, then Jason left and it was just kind of natural. I already knew the songs, I just had to actually put them on my hands. Which was a little bit stressful for about a week, but it wasn’t that big of a difference.

ZR: The songwriting process had to have been different, especially with Craig coming back into the band and you being the lead of another band…

Erak: That was a little bit harder; the songwriting process was a bit of a learning curve. With Fall of Troy, that’s my shit. Not to sound like an asshole, but that’s just how that band was run, and that’s how everybody likes it. It’s just kind of like what I say goes and not that people can’t bring up ideas and things, it’s encouraged. It’s more my project and that’s how it goes. Where as Chiodos you have many people that are really creative and really opinionated in a room together, and I had never experienced that at all.

ZR: Being a band with so many side projects; you with Fall of Troy, Bradley being in The Sounds of Animals Fighting and Cinematic Sunrise, and Craig with D.R.U.G.S and Isles and Glaciers; do you see any influences from those side projects in Devil.

Erak: I think with being a musician you go into survival mode and you do what you do, and if you do what you do things are going to turn out well. Don’t try too hard, but don’t not try. You’ve gotta find a balance between everything and that’s what makes it really interesting. I think Devil is a totally interesting record in the fact that there is a lot of different shit going on.

ZR: I saw that you guys recorded the album with David Bottrill, who’s done work with bands like Muse, Tool, and Between the Burried and Me. How was that?

Erak: It was a lot like working with Terry Date, who I also love dearly. Me and Dave saw very eye to eye on just everything. We have very similar sets of ears; the way that we want things to sound, the way that we think something should be structured. It makes a lot of sense to me, but not everybody has my outlook on how some things should be. Again, its finding a balance between what you think and what someone else thinks; that maybe you don't even agree with and everyone has to come to a conclusion and consensus. It’s like politics.

ZR: I’ve been listening to Devil for the past couple of weeks now and it’s a huge change from the old stuff, but so fitting with you coming in and Craig coming back into the band...

Erak: And Derek! Which I think is a really understated thing with all the press coming out about Devil. I think Derek coming back is a very, very important thing, because when they had Tanner on Illuminaudio, he’s a sick drummer man; but he’s just super busy, you know. I get this because I grew up playing drums, like he’s super busy and super choppy. But Derek is all about song, he’s more of like a Dave Grohl rock style drummer, he’s not such a metal, choppy kind of dude. Derek spends a lot of time with all of us writing these songs and bringing ideas into them, so I just want to give Derek props.

ZR: How has the tour bus life been for you guys?

Erak: It’s good. You have your good days and your bad days and people get annoyed with people, its natural; but it just adds to the chaos of rock and roll. You can’t be everyones friend all of the time and you learn to just get past that and have a common goal, to achieve. You hash it out and you say “fuck you” and this person says “fuck you” and then you hug and make up. It gives you a lot of things in common with people you might not have something in common with, so it’s an interesting way to make friends. I definitely love these dudes, because you meet a lot of people on the road that you say you're going to keep in touch, you say you’re going to be best friends, you say you’re going to do this and say you’re going to do that, then you know, it falls by the wayside. But when you’re actually calling somebody every month or two for ten years it’s like that’s a real friendship that you made.

ZR: You’re a perfect example of that with being friends with Chiodos all of these years, and then all of the sudden stepping in when they needed you for a new album. 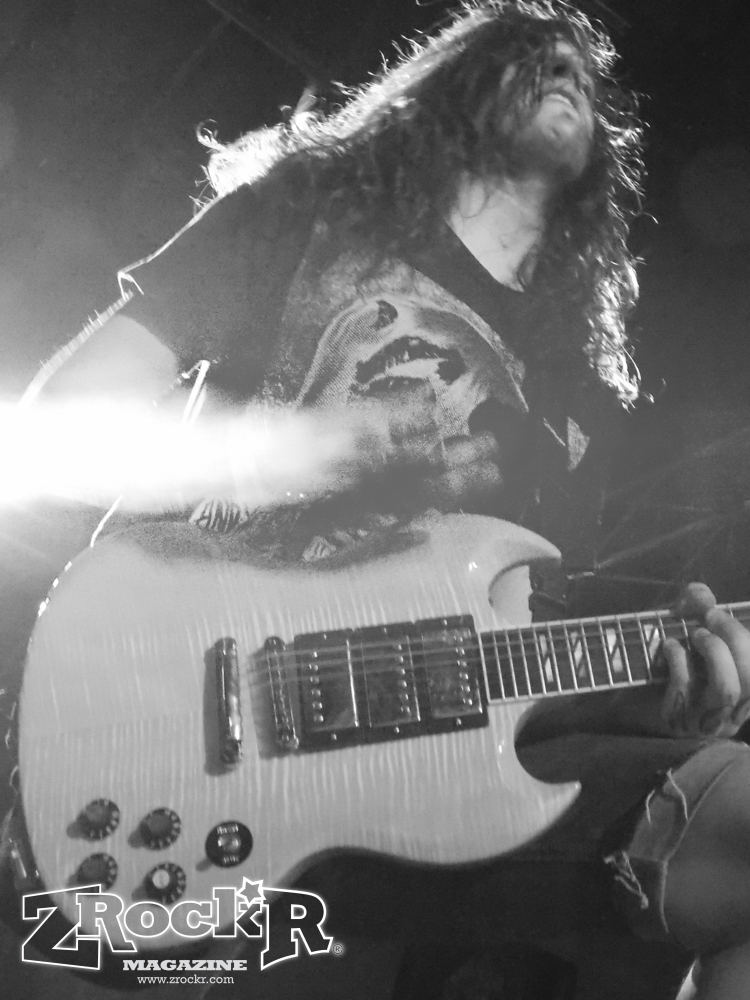 ZR: How has the fan reaction been, because the sound on Devil is a lot different from Illuminaudio?

Erak: I think Devil is definitely a grower, not a show-er. I think it’s a pretty deep album and I think the further away we get from when it was released, the more people are starting to really get it, like grasp the idea of where we were coming from and trying to do something different. I mean, I personally since we recorded it and it was done have really started to like it a lot more. Not that I didn't like it at first, but I've really grasped onto the body of work that it is, and I think that people see that. Its like watching a boy grow into a man. As annoying as the little boy is, he grows into a great man. And I think that sometimes it’s hard to let go of your little boy, but sometimes you’ve got to be a man. So that’s what I think, kind of, what Devil represents for Chiodos. Not that I can speak for everybody; I’m the new guy, too. But I’m pretty sure that’s how everybody feels.

ZR: How did you guys come up with the title of the album?

Erak: I think all of us have just been through a lot, and when we say “devil” we’re not talking about a red dude with horns, we’re talking about the devil that’s inside of everybody. It’s the right and wrong, it’s like the struggle of what you do versus what you say, and the dichotomy of that; and that’s what the records about. It’s pretty much a social commentary of battling with yourself and battling with evil and how to deal with the devil; which, I think, to us is not so much a figure as everything that surrounds you. Because everybody wants to be a good person but it’s a matter of how you try to achieve that, that really makes life what it is.

ZR: Okay, now a random question for you. If you had one million dollars, but could only spend it on evil, what would you spend it on?

Erak: Can only spend it on evil? I mean, I would probably spend it on myself, and I can be as evil as anyone else in the world can, so I guess the worst thing I could spend a million dollars is on would be myself…

Erak: Well yeah, just like every other human being I’m selfish, and dark, and weird ,and do stupid shit all of the time. If I had a million dollars and indulged in myself completely, I could get pretty evil, man. That’s why I think I really admire all these people that have millions and billions of dollars, and they do charity and put their money into positive things; that's big… but yeah, myself. I’m the most evil thing I could give a million dollars to. Maybe that’s why I don’t have a million dollars… it’s divine intervention, you know.