Home›Features›Inside Metal: Pioneers of L.A. Hard Rock and Metal Open a Fundraiser To Get The Fans Involved!

Inside Metal: Pioneers of L.A. Hard Rock and Metal Open a Fundraiser To Get The Fans Involved! 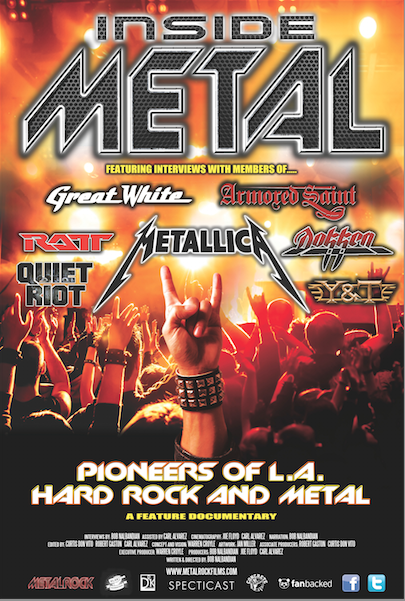 THE CREATORS OF 'INSIDE METAL: THE PIONEERS OF LA HARD ROCK AND METAL” DOCUMENTARY FILM SERIES, FEATURING SOME OF THE BIGGEST NAMES OF '80S METAL, IS OFFERING FANS A CHANCE TO BE INCLUDED IN THESE HISTORICAL MOVIES!

The early '80s metal scene in Los Angeles has become legendary, as it spawned such worldwide headliners as Mötley Crüe, Ratt, Dokken, W.A.S.P. and countless others. Many of those very artists now live in and perform in our neon and glittery Sin City ( have you never been to Vamp'd? Vinyl? LVCS? Dive? Triple B? ) And the new documentary, 'Inside Metal: Pioneers of L.A. Hard Rock & Metal,' chronicles the ENTIRE scene from the Starwood to the Whiskey and beyond.

The film is directed by Bob Nalbandian and produced by Metalrock Films. 'Inside Metal' features all-new interviews with countless bands and artists that thrived on the scene, and tell its story, first hand. But as everyone knows it takes money to do it up proper, and to ensure that this killer documentary receives the attention it deserves, a fundraising campaign has been set up at WWW.METALROCKFILMS.COM - which will help strengthen the film's distribution, marketing and promotion.

'Inside Metal' is about giving fans the real inside story from the behind the scenes world of metal and hard rock with in-depth interviews, ultra-rare concert footage and photographs, and an original music score from that era; in this no-holds-barred, never before seen, recollection of untold stories.

Early feedback has been exceptional, and Metalrock Films asks - and wants - real and serious metal fans to be a part of this historic documentary and spread the word that this was the scene where it all began, ground zero- LA- The Sunset Strip. "Our Fanbacked campaign will raise the direly needed financial support to bring this film to one and all in the US and Internationally in order to pay for the marketing and promotion to get it noticed by the general public. We want to bring this film to your theatre, town, bar, club and living room! Unite and support us. We have created some one of a kind opportunities for our friends and fans to participate with us in birth of this film. Get your name on the screen and let the world know that you support metal and the bands that create it. Help us tell the story of the music you love and let the world know you love it. Join in the festivities of our, and your, accomplishments by being at the premiere of the movie and interact with the artist that participated in its creation. Commemorate your participation with a plaque, t-shirt, poster or other limited edition merchandise items that says 'Metal Rules.'"

ZRockR supports the film maker's efforts and thinks the film will be AMAZING and a DO NOT MISS for ANY metal fan, but it has to get out there and the big studios don't give 2 shits about what we want- so let's get behind this and help INSIDE METAL get the press, promotion and distribution it really deserves! Be part of metal history- you can make that happen by going to www.metalrockfilms.com!

Keep up with the film HERE

Donate and get some fuckin' hella awesome swag HERE