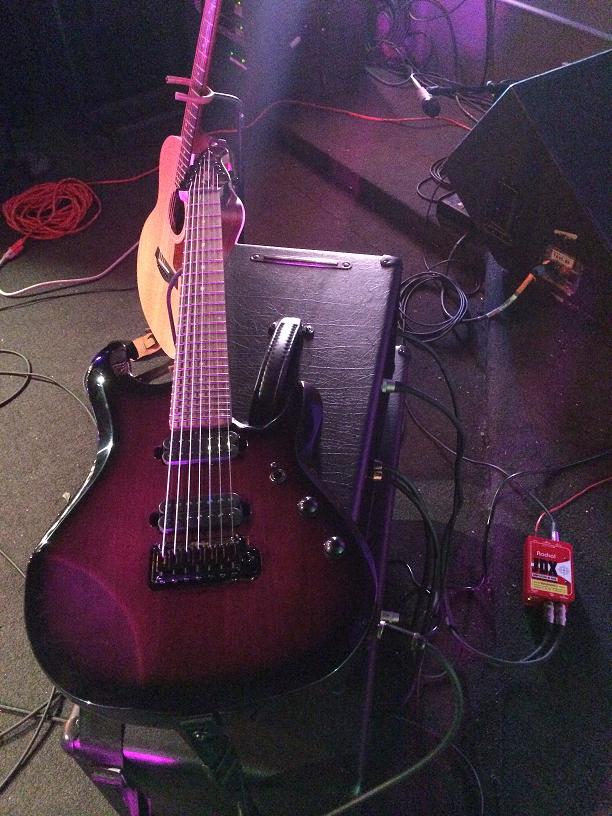 Sterling by MusicMan- The JP70- a 7 Stringed Slice of Heaven

I used to be in the Army. My job was “Guitar Player.” One of my additional duties was apparently convincing my (non-guitar-playing) supervisors of my need for various equipment. I had submitted a purchase request for an Ernie Ball/Music Man John Petrucci model 7-string guitar. My boss was a tuba player. His question: “Why do you need a 7-string guitar, SGT Bailey?” My response: “Sir, it allows for five more half-steps of rockin’.” And, in one moment, my commander forever endeared himself to me with these words: “Well, f*$%in’ order it.”

The preceding story doesn’t have much to do with this article; I just really wanted to tell you about it, because it was awesome. Now, down to business.

7-string guitars are generally tuned (low to high) B-E-A-D-G-B-E, with the lowest string being the B below the standard E sixth string. This tuning probably started with Steve Vai, who was the first well known proponent of extended range guitars in the rock world. Jazz guitarist George Van Eps tuned his seventh string to A an octave below the fifth string, presumably to facilitate accompanying himself in solo performances. In interviews, Vai has said that he developed his concept without knowledge of Van Eps’ history with the instrument, and the B tuning just made sense to him due to its replication of the top two strings. In my own performances, since I am often covering bass lines as well as typical guitar ranges, the 7-string is made in heaven for me.

Sterling by Music Man is the economy brand of American-made Ernie Ball/Music Man guitars. SBMMs are assembled overseas, but setup in California before being shipped to stores. Dream Theater guitarist John Petrucci’s signature models have been Music Man’s best selling guitars for years, but are fairly expensive, ranging from $2200-$3500. The most expensive SBMM model maxes out around $800, and they have many from $400-$600.

I have played Music Man’s top of the line JPX model, in both 6- and 7-string iterations, as my main instrument, so I feel I am able to compare the SBMM version. The Sterling version has simpler electronics, eschewing the piezo acoustic pickup of the flagship versions. They are available with the standard, “designed by DiMarzio” pickups, or in the “D-series,” the actual DiMarzio Crunch Lab and Liquifire pickups that were included on the high end models. My guitar came with the standard pickups, and they sound fantastic. I absolutely love the neck pickup with a clean sound, as well on more singing distorted lead tones. The bridge pickup is just what I need for crunchy rhythm parts, and more biting solos. In my music, I am constantly switching pickups to differentiate parts in my layered compositions, and am completely satisfied with the differentiation between the pickups. 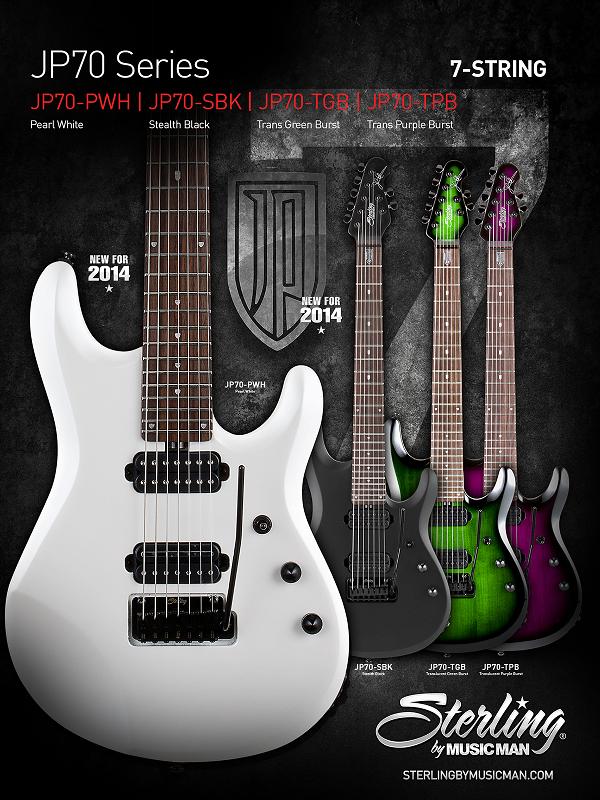 Official Promo Photo of the JP70 Series from sterlingbymusicman.com

But, since it’s manufactured overseas, isn’t the quality suffering? No. Shoot no. Heck no. Its tolerances are extremely high, and the finish on my Translucent Purple Burst JP70 is gorgeous. I feel like my guitar is a $1500 instrument which I obtained for $650. It comes set up for a low action to accommodate Petrucci’s fire-breathing shred style. I am by no means a shredder, but this is one of the most effortless instruments I’ve ever had the good fortune to play.

The neck takes a bit of getting used to if you haven’t plead a seven before, especially if you are used to playing with your thumb over the top, Hendrix-style. I can still reinforce bends that way, but fretting notes with my thumb would be problematic. It’s quite a different beast from a six string, even another Petrucci model.

The JP70 comes with a basswood body, a maple neck, and a rosewood fretboard. It’s locking tuners do an excellent job keeping the instrument in tune, even with ample use of the floating tremolo, which is equivalent to a modern Strat-style bridge. 24 frets, with a very comfortable 16” fretboard radius. The body as a unique carve in the upper body to allow for more comfort for your picking arm.

I have used the Sterling by Music Man JP70 seven string and JP50 six string guitars in rock, metal, country, pop, electronic, and even jazz; it is quite versatile, although it was definitely designed as a rock and metal machine. I admit to being a bit of a snob in regards to Epiphone vs. Gibson and Squier vs. Fender, but I absolutely have no issues with proudly saying the Sterling version is my main guitar. I am convinced that it is far and away the best mid-range guitar on the market, and easily competes with guitars twice its price or more.

Ace is Back! Ace Frehley Takes ...