Home›Reviews›Lita Ford Celebrated Her Birthday with Brazen at Vamp'd Vegas!

Lita Ford Celebrated Her Birthday with Brazen at Vamp'd Vegas! 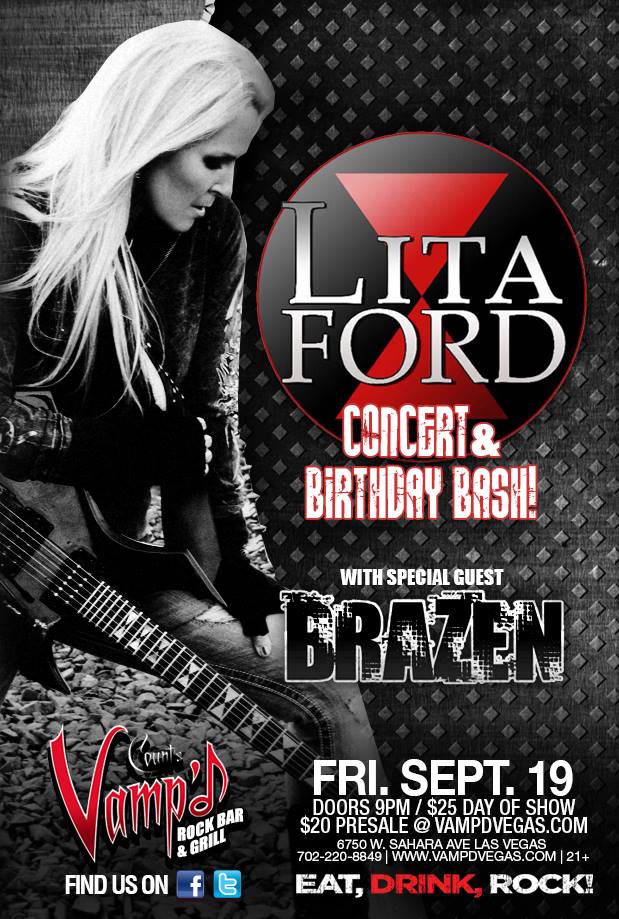 When it comes to badass women in the world of rock and roll, Lita Ford is tough to top. Her career is one of the most varied and diverse of any rocker, and she can more than hold her own, as she has demonstrated for decades. While Ford got her start as a member of the Runaways in the 1970s alongside musicians like Joan Jett, it was her solo career the 1980s that let her stand on her own and demonstrate what she was capable of in her own right. From hard rockers to pop tunes and ballads that were some of the best of their era, Ford had an undeniable presence and charisma on the stage. Something many, of course, will argue that she still has today.

Lita Ford, despite not being at the musical forefront like many of her fellow musicians of the era amidst changing trends, has still managed to keep busy. In the past several years, she has released both a new studio album, and a new live album. She has a dedicated fan following that can definitely tell how busy she is keeping! Playing with some of the top musicians around; her shows are always impressive to the fans.

Ford previously played Vegas this past January, at Vinyl inside the Hard Rock Hotel and Casino, so this is her second Vegas show of 2014. Upon hearing she would be playing Vamp’d, my favorite of all Vegas rock venues, I knew it was one I would have to be first in line for. How much of a crowd would this badass rocker chick turn out for her show at Vamp’d?

Enough to pack the house – no understatement.

As soon as I got to Vamp’d for this show, it was jam packed. For the majority of the night this rock and roll fan was barely even able to move around! It is great to see that she still commands so strong a following; her fans are as dedicated and devoted as ever. Packing a venue this tight should really say something for her lasting appeal, especially considering how many other artists from the era have been all but forgotten.

Kicking off this night of rock and roll was an opening set by Brazen, a talented ensemble of female performers playing a nice, diverse mixture of cover songs. Their set included everything from classic rock fare to gems from the 80s glam scene; they more than did justice to all of the above. Vocalist Cian Coey can definitely command a crowd with an unrivaled level as charisma and stage presence. Filling in on drums was former Bluff Control/current Mr. Scary drummer Danny Robert, who always puts on a good show regardless of what the gig at hand calls for.

Of course, everyone there that night was eager to see how Lita Ford’s set turned out; the crowded venue was packed from one end to the other and that alone should have said a thing or two about how eager they were to hear this classic hard rock legend do her thing, live and in person. It would not be long before the audience would have their answer – Lita Ford has still got it, and kicks ass like no other. Once again she has managed to assemble a band of talented players, including former Vinnie Vincent Invasion/Slaughter/Nelson drummer Bobby Rock.

Ford definitely has a way of keeping the crowd’s attention, in more ways than one. Even in her 50s, Ford still looks damn good, and can still keep up on the stage. With a guitar shaped like a vodka bottle and a damn good band backing her up, she immediately started the show with a cover of the Bitch is Back, the classic Elton John tune. You could tell the crowd was raring and ready to go from the reaction to that first tune alone. And in no time flat, Ford broke into plenty of other songs from her elaborate back catalogue.

One area where Ford excels is creating a balanced, quality setlist. Choosing which songs to play is never an easy task, but she gets the perfect balance of everything. Of course, we heard the obligatory hits like Close My Eyes Forever, Kiss Me Deadly, Back to the Cave, and Hungry, but we also got songs from earlier in her solo career like Out for Blood and Gotta Let Go. She even went as far back as the Runaways days with gems like Cherry Bomb and Black Leather; one of my favorite parts of the shows was Ford’s comments to the crowd about Cherry Bomb being back on the music charts thanks to sales of the Guardians of the Galaxy soundtrack! I did miss a few gems from Ford’s career including Playin’ with Fire and Shot of Poison, but that is a minor nitpick in the grand scheme of things.

Ford definitely has chemistry with her current band members; these are some of the best musicians she has played with in her long career. For me, the highlight of the show was a lengthy Bobby Rock drum solo, which even concluded with him bashing the drums with his HEAD of all things! The group was even joined by two guests from the Raiding the Rock Vault show near the end of the night – keyboardist Michael T. Ross (who has played with Ford on tours before) and guitarist Howard Leese (formerly of Heart). This added plenty of excitement to what was already a very fulfilling night. The level of energy did not let up for a single second throughout its entire duration.

Lita Ford’s concerts are always great; this badass rocker chick is still going strong and still looks great. No one should pass up the chance to see Ford live and in person, doing all that it is that she does best. If you are a fan of Ford, go see her live show; it will not disappoint!