Home›Reviews›Deep Purple Phoenix Rising - An Intriguing Documentary on One of Deep Purple's Darkest and Most Turbulent Times!

Deep Purple Phoenix Rising - An Intriguing Documentary on One of Deep Purple's Darkest and Most Turbulent Times! 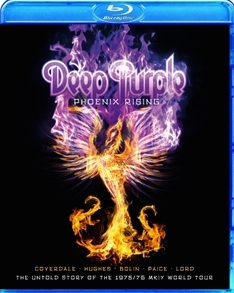 Phoenix Rising was released on Blu-ray Disc in 2011.

In the early 1970s, Deep Purple was on the rise in their classic MK II lineup, producing some of the most iconic records of their career; this was the band’s heyday and it seemed like their status as one of the biggest bands on the planet was destined to last forever. But when the band changed lineups as the decade progressed, things changed drastically for the worst despite immense musical potential and more iconic album releases. The behind the scenes excesses and addictions were taking their toll on the members of the group. Phoenix Rising is a documentary from Deep Purple that tells the story of this oft-forgotten era of the band.

The bulk of the Phoenix Rising Blu-ray Disc is devoted to the documentary on the band, running roughly 85 minutes in length. The doc covers the MK III and shorter-lived MK IV period of the band that spawned three classic albums – Burn, Stormbringer, and Come Taste the Band. This era of the group saw Ian Gillan and Roger Glover being replaced by David Coverdale and Glenn Hughes, respectively, and for the latter of those three albums, saw young guitar genius Tommy Bolin replacing the legendary Ritchie Blackmore. Through it all, members of the band endured addiction and burnout alike; it was the band’s darkest era and one rarely talked about by fans or band/crew members.

The disc also includes 30 minutes worth of concert footage, filmed in Japan, from the MK IV period, featuring Tommy Bolin on guitar, as well as audio-only tracks from the soundtrack album and extended interviews and the like. 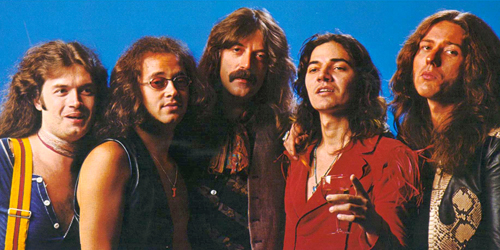 As a die-hard Deep Purple fan, this documentary comes as something of a revelation from a period in the band’s history that definitely does not have a silver lining or a happy ending. There are some surreal moments in this story, and through it all you definitely get a grasp of what kind of ordeals the group went through behind the scenes at the time.

The concert footage included as a bonus on the disc is only five songs long, but there are some amazing moments here, and it is some of the only surviving footage of Tommy Bolin playing with Deep Purple, so that alone makes it worth checking out. The doc goes into detail about many of the band’s most iconic concerts at the time and the like; it focuses on a single era of the band rather than trying to cram everything into one feature. If there is one flaw of an otherwise compelling documentary on this era of the band, it is that the only two that are really interviewed and telling the story are Glenn Hughes and Jon Lord (the latter of whom has since passed away). Where is David Coverdale, who was so instrumental in bringing this era of the band to life? A disclaimer given at the end of the movie implies that he may have different views on a key issue discussed in this doc, so it would have been good to have gotten some of his views. That is a minor flaw in the grand scheme of things, though.

As far as picture quality on this Blu-ray Disc goes, it is tough to review a documentary like this because so much of it is comprised of archival footage of varying quality culled from various sources, along with newly filmed interviews with Jon Lord and Glenn Hughes. The audio track is serviceable, but at the same time is not going to rock your speakers like a more recent concert disc.

If you are a die-hard Deep Purple fan curious about what was going on in this oft-forgotten period of the band, this disc is definitely worth picking up. Strongly recommended for fans!

Foundry - The Debut Album from Kelly ...