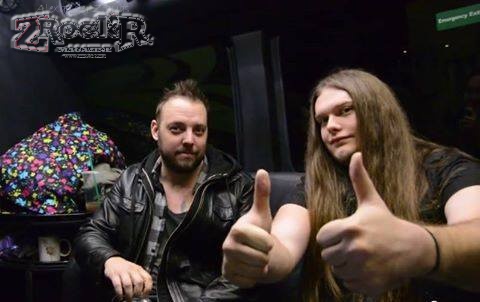 Wovenwar's Shane Blay and ZRock'R 's Marcus Miller sat down for a bit on the tour bus for a chat about the past, the future and even Nickelback!

The interview was supposed to start before the show, but due to some complications with getting the guestlist available at the box office, as well as Shane having a sinus infection, we postponed the interview until after the show.

SO, after Wovenwar's performance, I got a text from Shane saying he was ready to do it. I met him at the door next to the stage, nearly bumped into a getting pumped up Phil Labonte (All That Remains), and we walked out back to their van where it was surprisingly chilly and a bit rainy outside.

In advance, I told Shane I didn't "prepare" anything and it wasn't going to just be a robot interview and we were basically just going to talk and I'd ask questions along the way.

Zrock'R: You guys are technically a new band; Obviously there's history on both ends. How are you facing the challenge of re-establishing yourself?

Shane: I've just been treating it like a new band straight from the get-go. Not really wanting to feed off of or take for granted what we have both accomplished in the past. Just try to go forward and see where it takes us. But we're all totally treating it like it's a new thing, from scratch.

Zrock'R: How long had you known the guys beforehand?

Shane: Most of my life. I've known Nick since I was like 15 and Jordan since I was 16. Me and Nick were in a band together back in the day and then we split off... but we always kept in contact.

Zrock'R: Keeping it in the family! So, I'm not gonna be talking much about As I Lay Dying and all that kinda stuff. BUT, when what happened, happened, how did it come together? Like how did you get contacted?

Shane: I wasn't in the band so I wouldn't be of much help anyway (laughs). They contacted me months after it happened. I was on tour at the time with Oh, Sleeper and they just said "hey we're writing some new stuff, do you wanna try out on vocals?" and I was like... "YEAH!" and I told my guys and they were like yeah you'd be a fucking idiot not to so... I did. And right after Warped Tour I flew off and the first song we wrote as All Rise. So from there it was "oh cool I guess we're a band!", and they sent that off to Metal Blade and here we are. And the 2nd day, we wrote The Mason. Yeah it all went pretty quick. 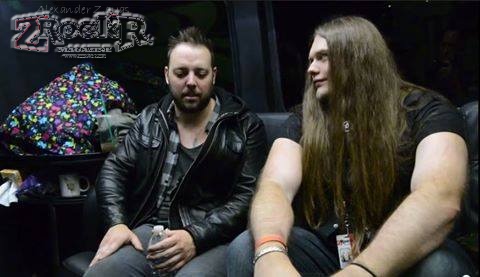 Zrock'R: Awesome. Out of all the songs on the record, I guess which one is more personal for you, means the most to you?

Shane: Probably Death to Rights and Prophets. Death to Rights is about a really, beautifully, tragic, relationship that I had. Prophets is about when I got baptized, and how I felt it was a crock of shit. It's just about questioning authority. Every night I think about that song.

Zrock'R: Is Oh, Sleeper kind of on hiatus or?

Shane: Yeah. We're all doing different things right now. Like Micah started a brewery in Dallas and it's awesome. Like they have fucking awesome beer; called Panther Island Brewery, if you're ever in town. He's got a family now. We both want something to happen, it's just like... when we can. I mean Oh, Sleeper is like part of my soul and it's never going to not be. We will do something else, just when we can. Wovenwar is so freaking busy; right now we're on a 75 day tour.

Shane: Yeah when I can have time to go back to Oh, Sleeper. Right now we're booked up pretty much the rest of the year. We're going to Europe after this, and then after that I think we might be doing some South American dates. It's all like... I can't talk about it yet cause the bands haven't been confirmed.

Zrock'R: I'm gonna move away from the music. When you're on tour and go into different cities; Do you go out and explore or do you kinda keep to yourself?

Shane: Yeah I try to go out and explore a little bit. I've toured this country for 10 years so there's not much I give a shit to see but we just did 7 weeks with In Flames in Europe and I went everywhere and looked at everything. It was amazing, because we went everywhere. I probably walked like 70 miles that tour.

Zrock'R: Did you go see StoneHenge? 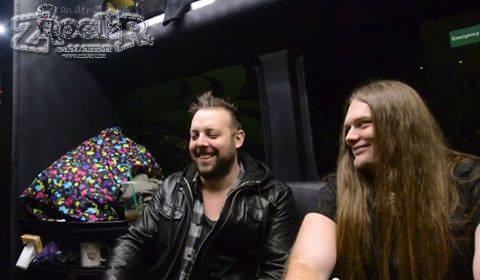 Zrock'R: I don't know your eating habits, but do you like to try new food places and stuff?

Shane: I don't ever remember eating here because I always get way too drunk to think about eating. Everytime I've played here in the last 10 years I've just blacked out on the street. It's not my fault! My family flies out here and they get me drunk.

Zrock'R: Well you don't like gambling all your money away, right?

Shane: No I don't have any money to gamble away.

(He blows his nose finally and apologizes; remember, he's got a sinus infection. Throughout the interview he's been coughing a bit.)

Zrock'R: Ok well, do you have anything that you would LIKE to say?

Shane: To the people?

Zrock'R: Yeah, to the people.

(Josh Gilbert, the bassist and co-vocalist walked by and was looking at us smiling.)

Shane: What a creepy smile. He just walked by like a rapist. But yeah... Buy music, or music will eventually die. Except for like, corporate stuff that's forced fed to you. 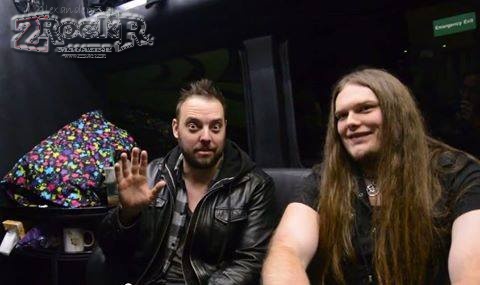 Thanks Shane! We hope to catch up with you more next time you are here and hope you are feeling better soon!

We went ahead and ended the interview there. He had family, friends, and his girlfriend there and wanted to spend time with them, plus we'd been doing the interview with the van door open the whole time so I didn't want to further enhance his sickness.

We thanked eachother and he let me back into the madness of All That Remains.

Carrere Years and EMI Years - The ...

The House of Blues was In Flames, ...