Home›Reviews›Live at the Mystic - Y&T Tears up the Stage with a Two Disc Live Album of Old and New Songs Alike!

Live at the Mystic - Y&T Tears up the Stage with a Two Disc Live Album of Old and New Songs Alike! 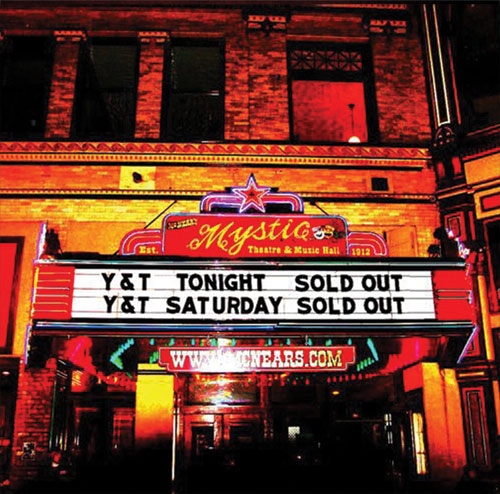 Live at the Mystic was recorded in November of 2011, and released a year later.

For Y&T it has been a long and interesting ride through the world of rock and roll. Starting life under the name Yesterday and Today in the mid 1970s, the group would peak in the 1980s under their now familiar moniker, releasing a number of classic hard rock anthems for the ages. Sadly, the group tends to get neglected compared to many of their peers, and they remain known for songs that were more on the pop and commercial end of the spectrum, despite being a far heavier and more talented band than many know them to be.

The band suffered a major blow in early 2011 when classic bassist Phil Kennemore passed away following a battle with cancer. From the classic lineup, only guitarist/vocalist Dave Meniketti remains, who is now joined in the band by drummer Mike Vanderhule, guitarist John Nymann, and bassist Brad Lang. Live at the Mystic, recorded in November of 2011, marks the first recordings the band members have ever made since Kennemore’s passing (as of this writing the post-Kennemore version of the band has not recorded any studio material).

The band has pulled out all the stops with this latest live recording, giving fans a two-disc package of live cuts recorded at the Mystic. But, even with a lineup that has changed considerably, including the death of a long time member, can the band still deliver on the concert stage?

While the setlist is far from perfect, the performance featured in this set is phenomenal, and demonstrates beautifully that the current version of Y&T is one of the best incarnations of the group yet. For two discs, the band serves up everything from hard and heavy rock to the more melodic tracks, and all of them still sound amazing. It is tough for a band to maintain their classic sound with so many personnel changes over the years, but Meniketti has assembled an amazing collection of musicians who more than bring their all to the table. 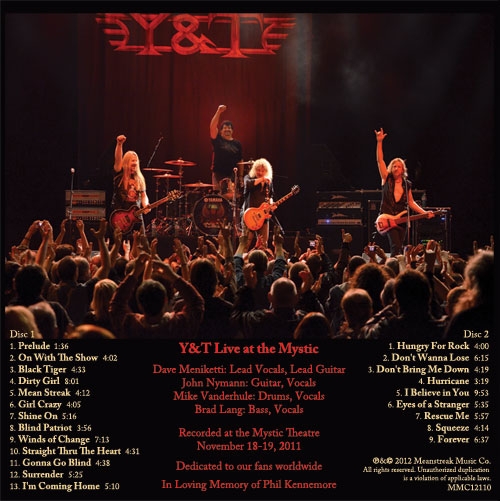 The setlist for Live at the Mystic combines old favorites with cuts from their latest studio effort, 2010's Facemelter.

The best thing I can say about this live album is that it is never boring. Despite being two discs and nearly two hours in length, the band keeps your attention from start to finish. Being recorded in 2011, during the 30 year anniversary of the classic Earthshaker record, the setlist primarily features tracks from that album and their latest studio effort, Facemelter. You get plenty of cuts spanning the band’s career that stand the test of time in their own right, and are given new life by the band here. In many ways, these songs sound even more epic and heavy on the live stage, and you will experience this quickly when listening to this release. The band is not afraid to dig into the vault here, and includes a number of the choice deep cuts as well.

The one minor complaint I have with this otherwise excellent live album is the setlist. Do not get me wrong, I absolutely love the performance on this album. You can tell the band wanted to pay tribute to Earthshaker for the record’s 30th anniversary, and also give fans some of the best tracks from Facemelter. The problem with the overemphasis of these two releases? Far too many Y&T hits and classics are cast aside and not performed because of this. Where are Lipstick and Leather, Rock and Roll’s Gonna Save the World, All American Boy, Beautiful Dreamer, Contagious, Don’t Be Afraid of the Dark, and Don’t Stop Runnin’? Even the band’s biggest hit, Summertime Girls, is not performed here. I do not fault the band for wanting to pursue some of the heavier tracks more in depth for this particular live album (and I actually prefer most of the songs on this album to those listed here), but fans expecting a “Greatest Hits Live” package might be disappointed to see so many of their favorite hits left out of this otherwise excellent concert.

Y&T rocks, and that is especially true on a live stage. It has been four decades since they released their debut album, but they are still going strong and winning over a live crowd like no other band possibly could. There are some issues with the setlist here, but that is not going to deter die-hard fans of the group from loving the live performance contained here. For any fan of the band, this is an essential purchase that comes highly recommended.