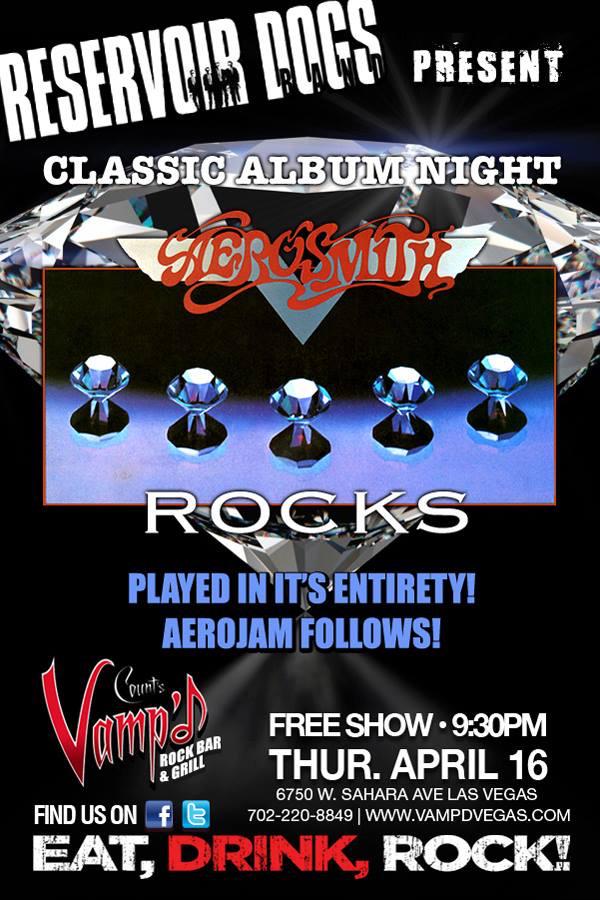 Thursday, April 16, 2015, was a night that many had undoubtedly looked forward to since the first Classic Album Night in late January, featuring an iconic Cheap Trick LP played front to back, followed by a brief intermission and jam which included more gems from their vast catalog. Judging from the turnout, it was a rousing success. The featured magnum opus of the evening was certainly a familiar one, even to a casual Aerosmith fan. Although the Rocks LP didn't quite feature the breakthrough hits of its predecessor, Toys in the Attic, it certainly captured the band at the peak of its powers on the ride up in their first decade. It has been described by many as the LP where the Bad Boys of Boston are their most raw and rocking selves, and includes several tracks that remain live staples to this day. 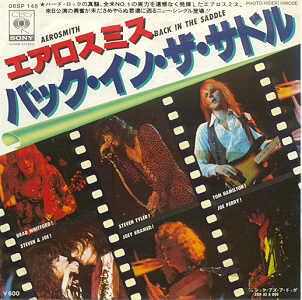 Cover art from an import "Back in the Saddle" 45" single.

Kicking off the show was the lead-off track "Back in the Saddle." Dru Jaxin, Johnny Roxx, Kaye Caruso and Yasuaki Taniguchi showed that they meant business and were primed to deliver the goods; the mic stand festooned with Tyler-esque trademark scarves. "Last Child," with its double entendre lyrics, followed. "Rats in the Cellar" picked up the pace, leading into the sleazy one-two punch of "Combination." As with the aforementioned show, there were interchangeable musicians coming and going to re-create this platter. John Zito, Stoney Curtis, Joe Calitri, and others were there to show the people that they have obviously immersed themselves in these songs over the years, paying close attention to the phrasing, licks and nuances like the pros that they are. Keith Robert even did double duty, alternating between lead/rhythm guitar and bass throughout. Although I don't personally know every one of the players who graced the stage, I can safely say that there was not a weak link in the bunch. In fact, I look forward to meeting the ones whose names I don't know, to commend them on an outstanding job. Highlights for me included a 15 year old Natalie Robertson on 6 string, Morpheus Blak (Mr. Details) w/ his red B.C. Rich, close in style to Joe Perry's, and Mary Kryah, who brought the house down with her gut-wrenching vocal delivery of the tender "Home Tonight," the eighth and final number on Aerosmith's 1976 landmark release. 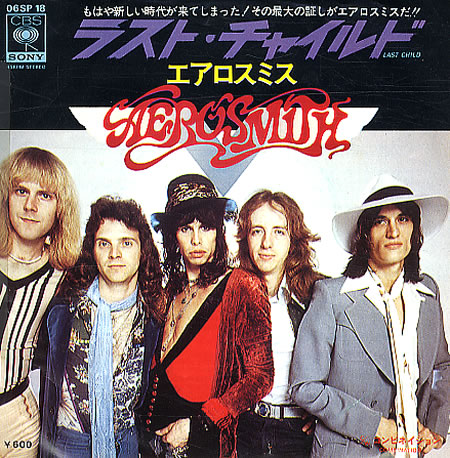 As mentioned earlier, after a short break to use the facilities and to order another round of firewater, the chameleon-like band with its ever-changing roster came roaring back to pummel the festive, fanatic followers of the Toxic Twins and company with no less than FOURTEEN more gems, most of which were culled from their 70s heyday. There was only one song each representing their 80's and 90's output, which probably didn't bother the faithfuls in the least. The only complaints I had (and they're REALLY MINOR, so not exactly complaints) were that nobody played keyboards, and the band's 1979 and 1982 albums were totally ignored. I, as a musician, caught a few minor rough spots, like forgetting lyrics to one of their biggest hits or figuring out how to end another, but it captured the spirit of the Bad Boys, who certainly turned in far sloppier performances in their drug-addled first decade. I also understand that there was only one formal rehearsal and I couldn't even tell you if everyone made it to the studio in question. Nonetheless, it was rather obvious that everyone who DID grace the stage that night was pretty prepared, from Scott McCartney to Carl Hampton and Barry Barnes, always holding down the bottom end, to the flamboyant and vocally-capable Marque Martinez; these artists clearly wanted nothing less than to celebrate the soundtrack of the lives of all of the Vamp'd attendees. I'm certainly looking forward to the next one: Judas Priest's British Steel, with assorted numbers from throughout their catalogue afterwards to round out the festivities. If you've heard of this exciting, new series gracing this venue on weeknights and were intrigued, but didn't attend either or missed one...shame, shame, shame on you, babe! Don't skip the next one once you hear of the date. It'll be WELL WORTH IT! 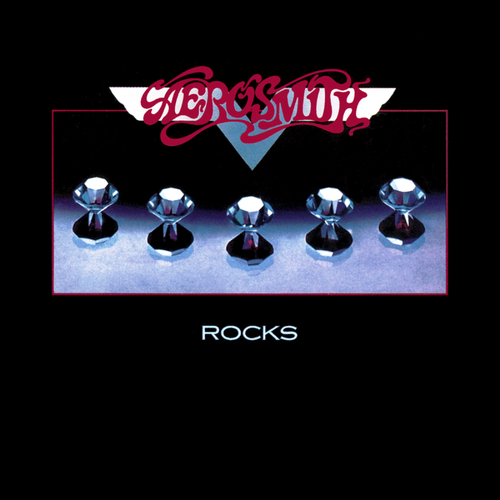 Originally released in 1976, Rocks is Aerosmith fourth album. This classic release spawned hits like "Last Child" and "Back in the Saddle."

Aerosmith Rocks LP in its entirety