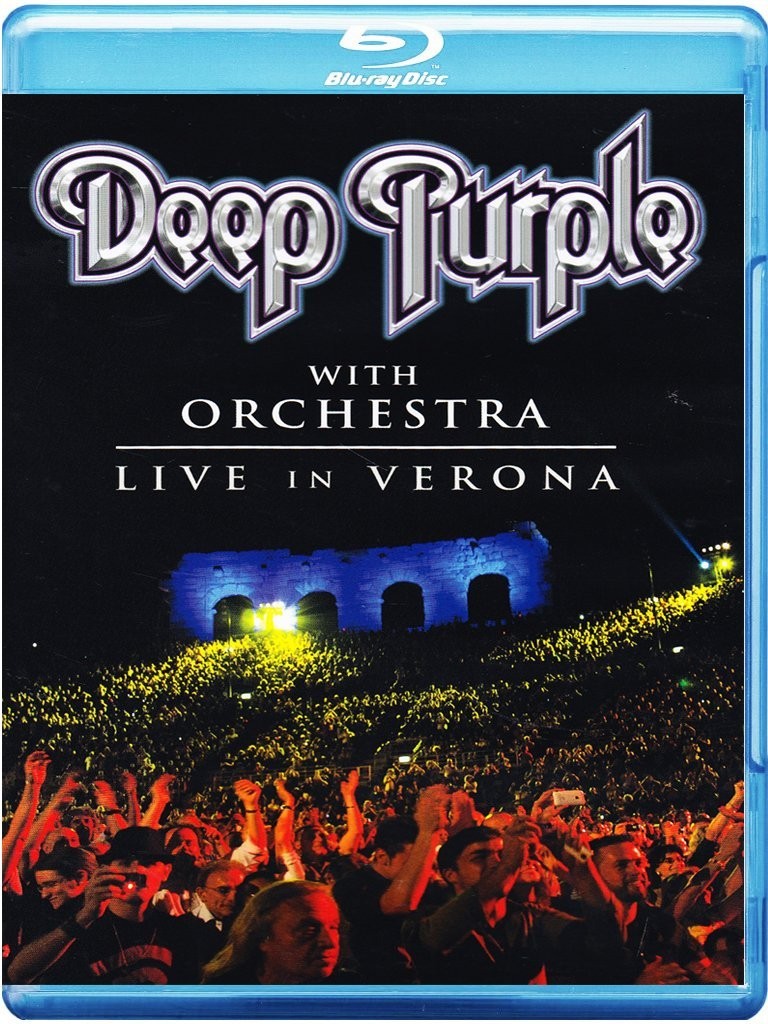 Deep Purple with Orchestra - Live in Verona was filmed in 2011 and released in 2015.

Deep Purple is simultaneously one of rock and roll’s most iconic bands, and one of its most underrated. Everyone has heard “Smoke on the Water” on the radio a million times, but the band has a far richer and more appealing history and discography than that song would lead one to believe. Throughout various periods, the band has taken on a number of sounds and progressed musically in many ways.

Deep Purple’s current lineup has stood since circa 2002. From the classic MK II lineup and still in the band are vocalist Ian Gillan, bassist Roger Glover, and drummer Ian Paice. On guitar is former Kansas and Dixie Dregs guitarist Steve Morse, who joined following the departure of classic guitarist Ritchie Blackmore in 1993. On keyboards is Don Airey, whose back catalogue includes work with artists like Ozzy Osbourne, Rainbow and Whitesnake. Airey joined around 2002 following the departure of Jon Lord, who passed away in 2012.

Ever since Eagle Rock stepped up to the plate and started releasing pop, rock, and metal DVDs and Blu-Rays, Deep Purple has been the recipient of many of them. To date we have gotten a live disc from 2006’s Montreux Jazz Festival, a disc from the 2011 festival, and a vintage disc with a documentary and a live concert performance from the short-lived Tommy Bolin period. The releases, admittedly, have been a bit hit and miss, though there have been some solid releases. What does this latest Deep Purple disc entail, and is it worth your cash?

Filmed in the summer of 2011 at the Arena di Verona, this is, not unlike the previous 2011 concert's Blu-ray release, Deep Purple playing live with orchestral accompaniment. Throughout the show, the band visits classics from their early years and original tenure together, plus songs that they recorded since reuniting in 1984 up to their (then) newest studio album, 2005’s Rapture of the Deep. The ancient arena is packed with Deep Purple fans throughout, who came out to catch one of classic rock’s most iconic bands live and in person, and in a legendary venue.

I love Deep Purple, anyone who knows me knows this. But this release feels like a quick, cheap cash-in. The performance is more or less the same as the other 2011 release, aside from the venue being different. The orchestra is barely noticeable or audible throughout the whole show (a similar complaint I had of the previous release). Ian Gillan is clearly struggling to hit the high notes (thank the powers that be he did not try to do “Child in Time.”) The Coverdale era is not represented at all, despite the band using the logo of that period. Why did the band not wait and just release a live concert from the Now What tour, which has become their best album since 1984’s Perfect Strangers? As much as I love this band and some of the highlights of this show, it has a “been there, done that” feeling about it. Fans who purchased the previous disc are not going to find too much distinctive or interesting about this one.

Audio and video quality are good throughout, aside from some minor graphical glitches and murkiness largely as a result of the lighting. Some oversaturation occurs in a few scenes with heavy lights on the stage/players/etc., but overall this is a very good looking disc; most of the flaws are common to concert videos. The two encore tracks are included as a separate feature on the disc, rather than part of the main presentation. Not sure why. There is no other bonus material included.

Deep Purple is a great band, but this release is a little too similar to the previously released Live at Montreux 2011 disc, with all of the same flaws. If you want a better concert from the modern version of Deep Purple, the Montreux 2006 disc is recommended; it does not go in for a failed orchestra gimmick and actually has a bonus Hard Rock Café show on the disc. For quality vintage Deep Purple, there is a 1984 Perfect Strangers Tour DVD available, and the Phoenix Rising disc, which features a documentary on the Tommy Bolin period and 30 minutes of a vintage show from the era. As it stands, I cannot recommend this Verona release, as there are superior Deep Purple products out there.

Classic Albums - An In Depth Look ...