Home›Features›The Star Wars Holiday Special - Proof That Even a Galaxy Far, Far Away is Not Immune to Terrible 70s Television!

The Star Wars Holiday Special - Proof That Even a Galaxy Far, Far Away is Not Immune to Terrible 70s Television! 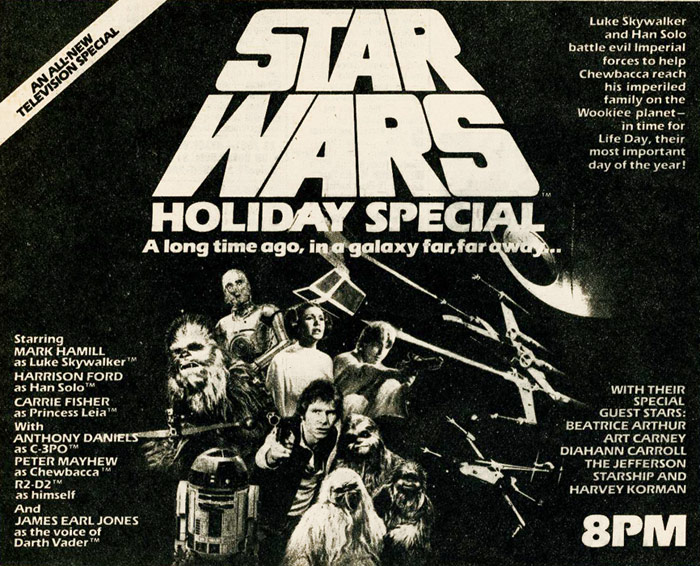 The Star Wars Holiday Special only aired once, in 1978. It is not viewed as one of the franchise's high points.

When Star Wars was first released in May of 1977, it was an instant success, and became one of the biggest movies of all time. Merchandising was massive for the new franchise as it made an impact on the entertainment and popular culture world. And yet, even at the time, it is not likely anyone could have predicted the longevity and further growth the franchise would have. Nearly 40 years after the release of the first film, this is still one of the most popular series of all time, with a whole new generation of fans.

1978 saw one of the more interesting developments in the franchise, and this fan does not mean that in a good way. To cash in on the name of the film following its release, a Star Wars Holiday Special was hastily assembled, featuring cameos from some musicians and comic talents of the day. The special was made with little input from series creator George Lucas, and is often viewed as one of the most dismal lows in the history of the franchise.

The Star Wars Holiday Special is set in the time period following the first film (keep in mind it was released before the sequels). Han Solo is struggling to get Chewbacca back home to his family on Kashyyyk for Life Day, an annual holiday on his home world (likely meant as a stand-in for Christmas). But Imperial presence complicates things, with the Empire looking to hunt down the Rebellion and its agents. Along the way, Chewie’s family must deal with Imperial troops searching the planet and their home, our heroes must escape the horrors and dangers of a water-covered planet, and a number of other potentially dangerous, perilous obstacles. 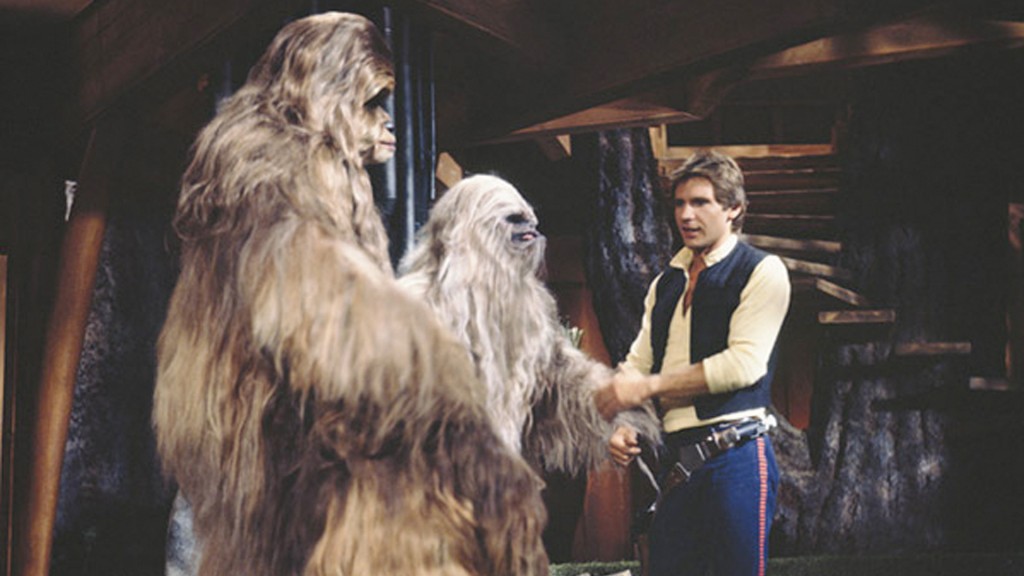 Chewbacca has a family, and getting home to them is a central plot point here.

Sure, I provided a decent sized plot summary there. But there really is not much of one. What little here that could be considered a plot is basically a vehicle for stupid, slapstick comedy and godawful, dated 70s variety show-style sketch comedy that feels horribly out of place in the Star Wars universe. At times, several minutes at a time are devoted to useless, boring songs and other humorous sequences that really are not amusing in the least. To call this presentation dated is an understatement. If you can watch this thing from start to finish without fast forwarding, congratulations. You have the patience of a saint.

Where does one even BEGIN with what is wrong here? Luke, Leia, and Han’s presence here feels like an afterthought; definitely NOT a good thing when they were the driving force of the original film. The movie focuses primarily on Chewbacca’s (annoying) family. You will spend a good portion of this time just listening to them all making Wookiee noise and doing mundane household tasks. You will agree with me when I say I just wanted the Stormtroopers to open fire on them. Would have saved us two hours we can never get back. 30 years later in Episode III, we got to see Wookiees fighting for the safety of their home planet with all their might. Here, we get to see them cooking, doing the dishes, playing with toys, and watching television. Sadly, I am NOT making this up!

People praise the animated sequence of the film because of the first appearance of Boba Fett, but honestly, even this sequence is pretty terrible. The characters and the animation style are both horrible (why the hell does C-3PO BLINK? He’s a Droid!) If you are curious about this sequence, it is included as an easter egg in the Complete Saga Blu-ray set; no need to hunt down a bootleg copy just for that one scene/appearance. 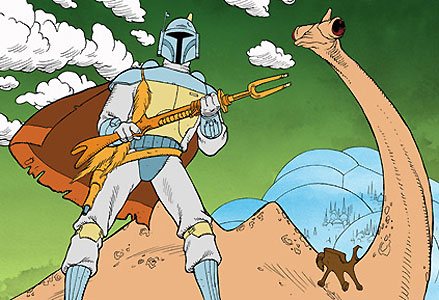 Perhaps the most noteworthy aspect of the presentation is its animated segment, featuring the first appearance of Boba Fett.

The entire Tatooine Cantina sequence feels like filler, even more so than the rest of the presentation. Once more, we are subjected to failed attempts at humor, and a lengthy song by Bea Arthur that, yet again, feels totally out of place. This Cantina setting feels horribly low budget compared to the one we saw on the big screen in 1977. Harvey Korman plays three characters in the special, including one in this Cantina sequence, but none of them come close to capturing the comic genius he had on display in something like Blazing Saddles (no doubt due to the sanitized, family friendly television atmosphere).

Many aspects of the presentation feel dated, namely much of the era’s technology on display (I am pretty sure I saw what could have been either a Commodore 64 or Coleco Vision in the Wookiee house), and the slapstick variety feel. NONE of this feels appropriate for the Star Wars universe. The songs and performances, similarly, do not belong here, as anyone will be quick to agree.

Take everything wrong with the worst of television and entertainment in the 70s, mash it together with Star Wars, and this is the end result. Even the often-maligned prequel films in the series are godlike compared to anything you will find in the Star Wars Holiday Special. There is a reason George Lucas likes to pretend it never happened. It is an obscure curiosity in a galaxy far, far away that that should remain a distant memory and nothing more. Seriously, do not waste your time with this one unless you are curious, have some spare time, and a high tolerance for cringe-worthy 70s television.

That link below? Click at your own risk. It's YOUR precious time.

Tracii Guns - Cocked and Loaded on ...