The Heavy Metal Pack is Back - Raven Rocks Hard on Their Newest Record, ExtermiNation! 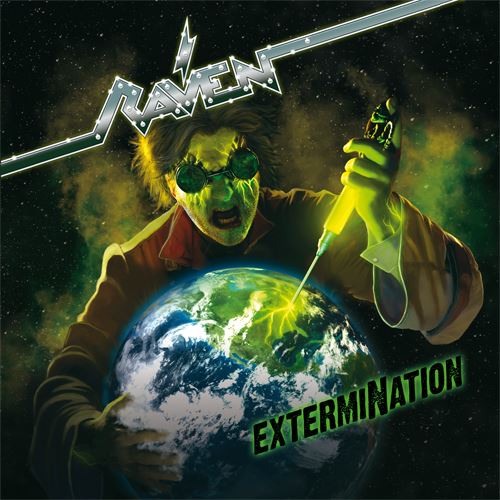 ExtermiNation is the 13th full length studio album from Raven.

Raven is one of the most legendary bands of the New Wave of British Heavy metal (NWOBHM) and one that has actually managed to survive and endure to the present day. Founded by brothers John and Mark Gallagher in the 1970s, Raven was a band that attracted legions of fans, though never quite got the worldwide fame and success that they deserved. The band replaced classic drummer Rob “Wacko” Hunter with Joe Hasselvander in 1987, who has remained with the group ever since. Over the course of four decades and a dozen albums, Raven has outlasted many of their NWOBHM brethren, and continues to make their mark on the rock and roll world.

Raven has been a massively influential band over the decades, though ironically many of the bands that they influenced became far more popular than Raven themselves. This has not stopped them from rocking out, recording, and touring the world, doing what they do best. They are amongst the greatest of the bands the NWOBHM had to offer, and to this day, still produce hard and heavy rock that is unrivaled by other bands.

ExtermiNation is the 13th full length studio album from Raven. Funded via a Kickstarter campaign, this is the band’s first full length studio album since 2009’s Walk through Fire, and one long awaited by fans of the group. So, how does the group’s latest effort measure up? Is this is a release worth your money, or should these guys throw in the proverbial towel and call it a day?

Raven has always been a band combining hard and heavy riffs with fairly juvenile, simplistic lyrics and themes, and that is definitely true on the band’s latest release. Right from the get-go, ExtermiNation is a hard and heavy record that epitomizes everything that is great about the band. A straight-up, hard and heavy album that may very well be their hardest and heaviest in two decades is what fans will find here. If you are a fan of the band, it is a pretty safe bet that you are going to like what you find on this record. This is Mark Gallagher at his best when it comes to serving up heavy metal riffage, and you will be thoroughly rocked from start to finish. Some bands wuss out and go poppy or bluesy as they get older. Raven has opted for the opposite approach, giving us their heaviest record in years. And this fan likes what he hears.

Throughout the record’s duration, there is very little that is not hard or heavy. Even the slower songs rock hard. There are some fairly brief acoustic moments, but they do not last too terribly long; this album belongs to the hard and heavy, and rightfully so. The album itself is fairly coherent; no song feels out of place. This fan, for one, is pleased to see a band that, even in this advanced age, can still record hard and heavy rock and roll. The production is considerably cleaner and more modern than the classic albums the band released back in the day, though it never feels overly polished or clean either, doing a good job bringing out the band’s heaviness.

At 15 tracks, the record is excessive and a bit much to digest. It probably would have worked better with 10 of the best tracks rather than the full 15 here; though would you expect any different from a band that released an album called Nothing Exceeds Like Excess? The overlong run time is definitely not a deal breaker though, not one song on here is “weak.”

ExtermiNation is Raven at the hardest and heaviest they have been in years. The result is a superb heavy metal album that the fans have been in need of for years. Raven’s followers will agree that this one was worth the wait. While a bit overlong with a run time that exceeds an hour, the good far outweighs the bad here. The Pack is back again, and with their return they have brought us some of the best music they have recorded in years. To any fan of classic style hard rock and heavy metal, ExtermiNation comes strongly recommended.

B-Side Ourselves - The Sebastian Bach-era Skid ...