Home›Reviews›Elefante - The Latest Studio Release from Marq Torien and the Bulletboys!

Elefante - The Latest Studio Release from Marq Torien and the Bulletboys! 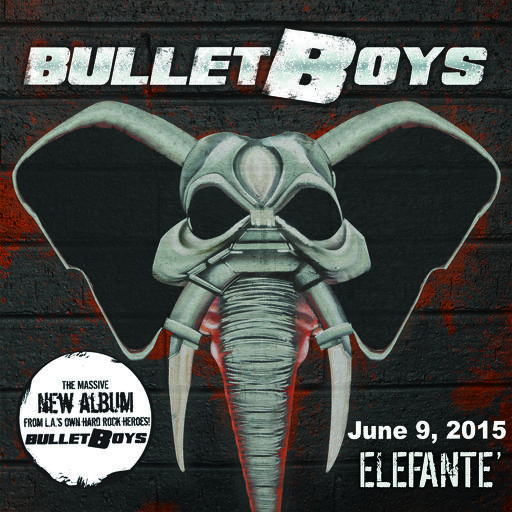 In the late 80s and early 90s, the Bulletboys came on the music scene and left an almost immediate impression. Featuring former King Kobra members Marq Torien, Mick Sweda, and Lonnie Vencent, plus drummer Jimmy D’Anda, the band scored no shortage of hit singles and MTV videos with their Ted Templeman-produced 1988 debut. A number of albums have since followed, with widely varying band lineups. Torien remains the band’s one constant member, with the group’s current lineup also including Chad MacDonald, Nick Rozz, and Shawn Duncan. The former classic members of the group have since formed a separate band with a new singer.

Elefante, the latest studio release from the band, is their first album of all original material since 10C Billionaire in 2009. The band has promised fans something that is NOT merely a “rehashed 80s record,” and as their first album of original material in six years, needless to say, many people have been eager to hear the end result. Do the Bulletboys hit the target with Elefante, or is this release a misfire?

This is one of those albums that is tough to evaluate because of what it is. On one hand, this release sounds nothing like the Bulletboys of old; if you did not know better you would never know that this was the band that gave us “Smooth Up in Ya” and “THC Groove.” While I certainly miss the band’s classic sound, at the same time they must  be given credit for branching out and trying something new.

The problem I have is WHAT the band tried new. Elefante is not a weak record by any stretch of the imagination, but it is too derivative of basic, modern-style radio rock. Someone hearing this record for the first time, in fact, may very well mistake it for an up-and-coming modern band. The album, though not without its redeeming qualities, is completely unoriginal and feels like the band is trying to sound like all of the other bands out there today that have saturated the market. A few of the melodic, pop-flavored songs come close to “Top 40” territory, in fact. The band claimed this would not be a rehashed 80s style record, and certainly delivered on that promise. Unfortunately, it DOES, in many ways, feel like a rehashed modern rock record that we have heard countless times from other modern artists.

That said, though, one place I will give the record major credit is Marq Torien’s vocals. There have been a lot of negative things said about this guy over the years (much of which is true), but his ability to deliver the vocals and to perform as a musician is not something this fan will doubt again. He packs a powerful voice throughout the release, and it is definitely the stand-out man here. The current lineup Torien has backing him deserves credit as well; they are all musically talented. If you have seen this version of the band on a live stage recently, you know how capable they are of doing justice to the Bulletboys’ repertoire of songs, old and new alike. It is just a shame we could not get something more original here.

One other issue that needs to be addressed here is the cover of Elton John’s “The Bitch is Back,” which is this release’s penultimate track. Seriously, of all the songs that the band could have covered, why use one that Lita Ford already did a kick-ass version of only a few years ago? The rendition here is surprisingly solid, and might even be my favorite thing on the record. But if you are going to cover a song, pick one no one else has covered, at least not any time recently.

In the end, it is good to see the current Bulletboys lineup is musically capable and still bringing the goods on a live stage, but Elefante is a middle of the road affair, far too derivative of what every other band out there is doing today. Other bands have a way of modernizing while staying true to their classic sound, and others change sounds outright without blatantly copying trends. Sadly, on Elefante, the current Bulletboys lineup has done neither, and has given us a record that, while not bad by any means, is hardly original or innovative. Moderately recommended for the curious.

Scorpions - A Look Back at Lonesome ...