Home›Reviews›Dokken's Back for the Attack - The Classic Album Reissued by Rock Candy Records!

Dokken's Back for the Attack - The Classic Album Reissued by Rock Candy Records! 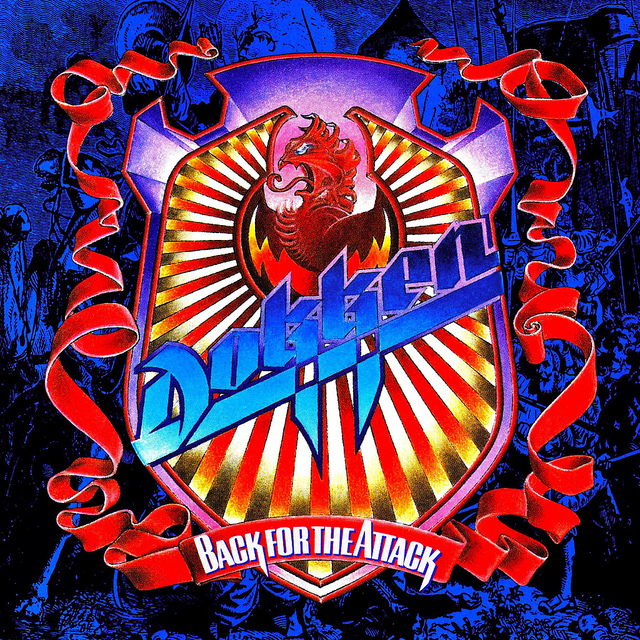 Back for the Attack is the fourth studio album from Dokken, originally released in 1987.

In the 80s rock scene, Dokken was one of the most prominent bands, with several album releases and hit MTV videos. This was a band that was continually on the rise, and the favorite of many a fan. Combining the unique vocal style of Don Dokken, the unrivaled guitar prowess of George Lynch, and the superb rhythm section of Jeff Pilson and Wild Mick Brown, the band recorded and released some of the best rock and roll of the era. But, like so many other things in the music world, it was not to last.

1987 saw the release of Dokken’s fourth studio album, Back for the Attack. It is not likely at the time the band knew it would be the end of an era. Following the subsequent tour and the release of the live album Beast from the East, the group disbanded, largely due to creative differences between George Lynch and Don Dokken, both of whom moved on to other projects. How does Back for the Attack fare? Is this the last great triumph for Dokken’s classic lineup, or a mess that stands as a premonition of the band’s downfall?

UK-based Rock Candy Records reissued and remastered all four of the studio albums that Dokken released in the 1980s, this being the fourth of the lot. The CD features all 13 original tracks that appeared on the LP, plus a bonus B-side.

Tooth and Nail is usually regarded as the best Dokken album, and perhaps rightfully so; that record contains the most classic hits and is probably their hardest and heaviest effort. But Back for the Attack is the Dokken album that surprised this fan like no other. The group takes their sound in a larger and more melodic direction with bigger production, yet manages to do this without sacrificing any of the hard or heavy musical elements that made them a great band to begin with. The album is considerably less raw and gritty than its predecessors, but this ends up being more of a strength than a weakness. They managed to score several hits with this album, and even the deep cuts stand the test of time better than most songs from other rock bands of the same time period. Back for the Attack is more than just a good album from start to finish; it is my all-time favorite Dokken record.

The two best things about classic 80s Dokken for this fan are Don Dokken’s vocals and George Lynch’s guitar work, and this fan truly believes there is no better place where the two of them shine than on Back for the Attack. The album is longer and features more tracks than the albums that came prior, but there is not a single “weak” or “filler” song on this entire album. Opening cut “Kiss of Death” features a hard and heavy sound, grabbing the attention of any metal fan listening to the record right from the opening moments. Members of other bands take notice - THIS is the way to start an album! The anthematic “Prisoner” comes next, and stands as one of Don Dokken’s absolute best vocal performances, though it does not skimp on quality contributions from the other band members, namely Lynch with his guitar solos. I have no reservations in calling this my favorite song Dokken ever recorded. “Night By Night” is a strange mix of hard, heavy, melodic, and dark alike, and stands as one of the strongest cuts featured here as a result. “Heaven Sent” is a ballad, but a harder rocking one that rightfully became a hit for the group. The instrumental “Mr. Scary” gives people yet another reason to put George Lynch in their “greatest guitarists” lists, as if they did not already have enough of them! “Burning Like a Flame” is the perfect balance of hard rock and pop rock, and was one of the group’s final hit music videos; this song definitely makes an impression. Another great “heavy yet melodic” performance comes in the form of “Lost Behind a Wall,” which should have been a bigger hit than it was. The album is ultimately concluded with “Dream Warriors,” the band’s classic contribution to the Nightmare on Elm Street film series. This was Dokken’s lengthiest and most ambitious album, but they did not disappoint. Who says going more melodic means having to sacrifice the harder, heavier elements of a band’s music?

Rock Candy Records reissued all four of Dokken’s studio albums released in the 1980s – Breaking the Chains (1983), Tooth and Nail (1984), Under Lock and Key (1985), and most recently, this gem from 1987. All of the Rock Candy reissues feature a booklet packed with rare photos, interviews, and essays. The Back for the Attack reissue is no exception. Rock Candy also gives fans a much-needed audio bonus here in the form of (the song) “Back for the Attack,” a B-side to the “Dream Warriors” single that did not make it on the final record. I do not own an earlier CD release of the album to compare the sound quality on this release to, however I can safely say that this CD sounds great; the album featured some of the band’s biggest and most elaborate production values, and that shows on this release excellently. Now, if the folks at Rock Candy would give us a remastered version of the Beast from the East live album, we would be set!

Back for the Attack is a heavy metal masterpiece that captures Dokken at their finest, and Rock Candy’s reissue is the best CD version of the album released to date. No collection of 80s heavy metal is complete without it, and this is definitely the version for you to own. With the band at their absolute finest, and a quality reissue, Rock Candy’s reissue of Back for the Attack gets this heavy metal fan’s absolute highest recommendation!