Home›Reviews›Star Wars 007 - Help Me, Obi-Wan Kenobi! You're My Only Hope!

WARNING: This review contains potential spoilers for those who have not seen the Star Wars films. 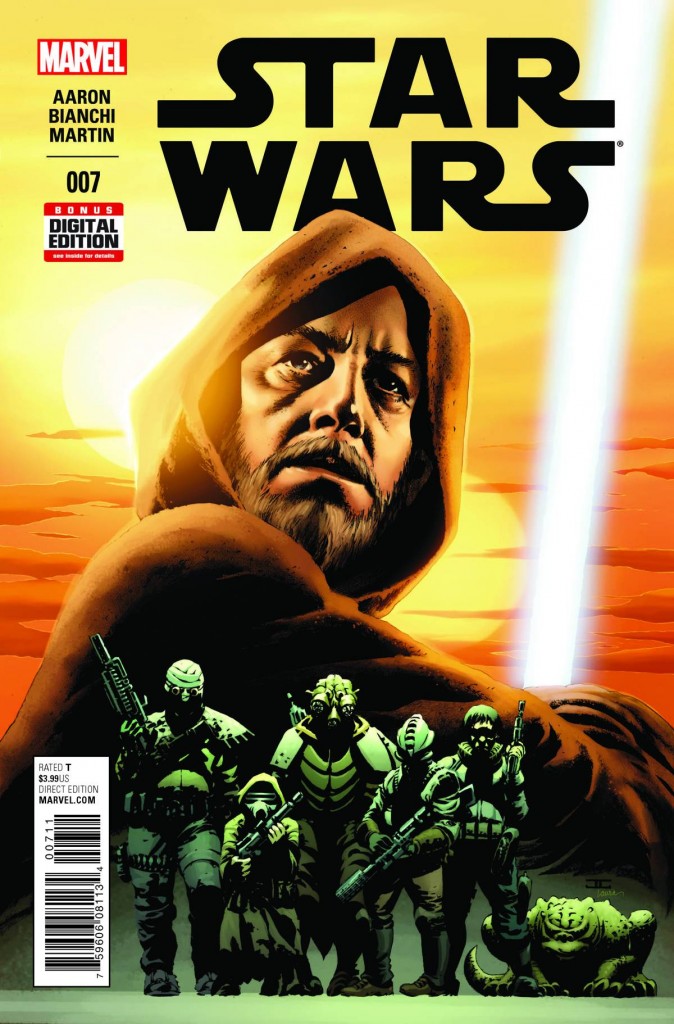 Star Wars issue 007 was released by Marvel Comics on July 29, 2015. This is a one-off flashback story starring Obi-Wan Kenobi.

The Force is with Marvel Comics.

Having reclaimed the rights to make Star Wars comics from Dark Horse, 2015 has seen no shortage of releases set in everyone’s favorite Galaxy Far, Far Away, with many triumphs. Multiple series are now ongoing, and those age-old Star Wars fans wanting new stories featuring their favorite characters, locales, and beings have gotten them and then some. With the purge and relaunch of the Star Wars Expanded Universe, these comic stories have been leading the charge and achieving impressive sales figures and reviews alike.

To date, there have been five Star Wars comic series in the new Marvel line. These are Star Wars (the main comic series), Darth Vader, Princess Leia, Kanan: The Last Padawan, and Lando. Princess Leia just finished its five-issue run, while the others are still ongoing. Series based on Chewbacca and ones leading into Episode VII: The Force Awakens (the new forthcoming theatrical movie) are planned for the future as well. 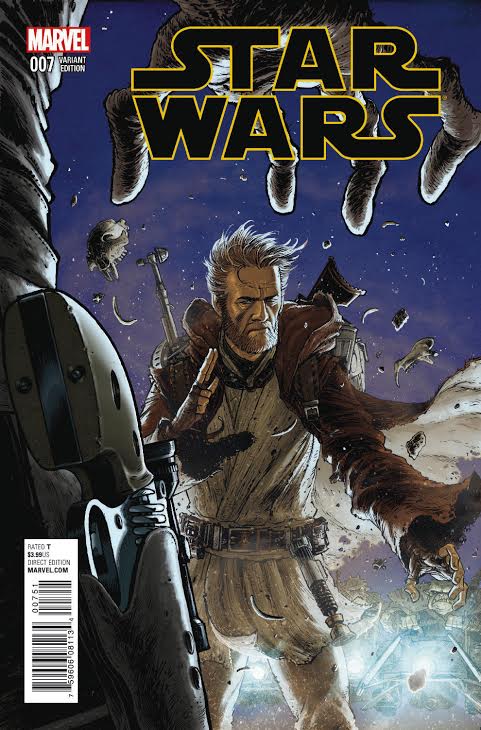 Like other Marvel Star Wars comic releases, this one features a number of collectable variant covers, including this one.

The main Star Wars series, thus far, has been set between Episode IV: A New Hope (the original 1977 film) and Episode V: The Empire Strikes Back (this is the same time frame occupied by the majority of the other series as well). To date, the main series has been an ongoing story continuing the story in that time frame, and the struggles of the Rebel Alliance against the evil Galactic Empire. Star Wars 007 (the seventh issue in the series) departs from the format of the “Skywalker Strikes” stories in previous issues. 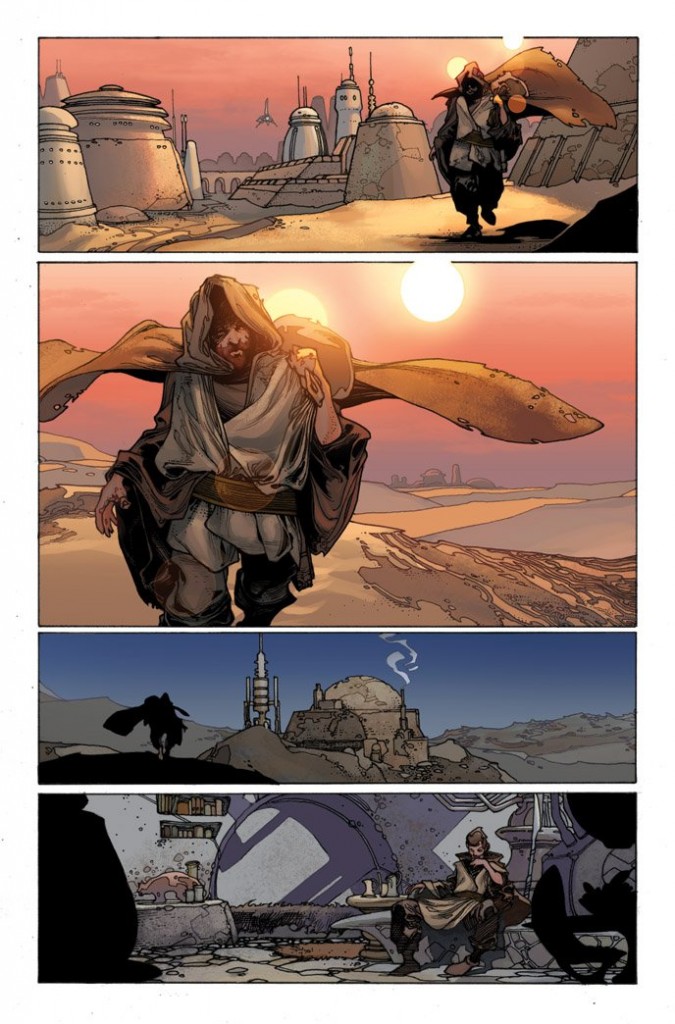 Following the events of Star Wars Episode III: Revenge of the Sith, Kenobi went into hiding on the desert world of Tatooine.

Emperor Palpatine has issued Order 66, resulting in nearly every member of the Jedi Order being hunted down and killed. Anakin Skywalker has fallen to the Dark Side, becoming Darth Vader. Obi-Wan Kenobi went into exile on Tatooine following this series of events, watching over young Luke Skywalker as he grew up in the care of his adoptive aunt and uncle. Kenobi has put away his lightsaber and vowed to do his part to be a silent onlooker, not wanting to draw attention to himself and those on the planet. But when reckless gangsters in the employ of Jabba the Hutt begin extorting taxes on the moisture farmers, the former Jedi Master must decide whether to remain in the shadows, or to act. When young Skywalker wanders into the path of these thugs as they approach the Lars Homestead, Kenobi is forced to make that difficult decision. 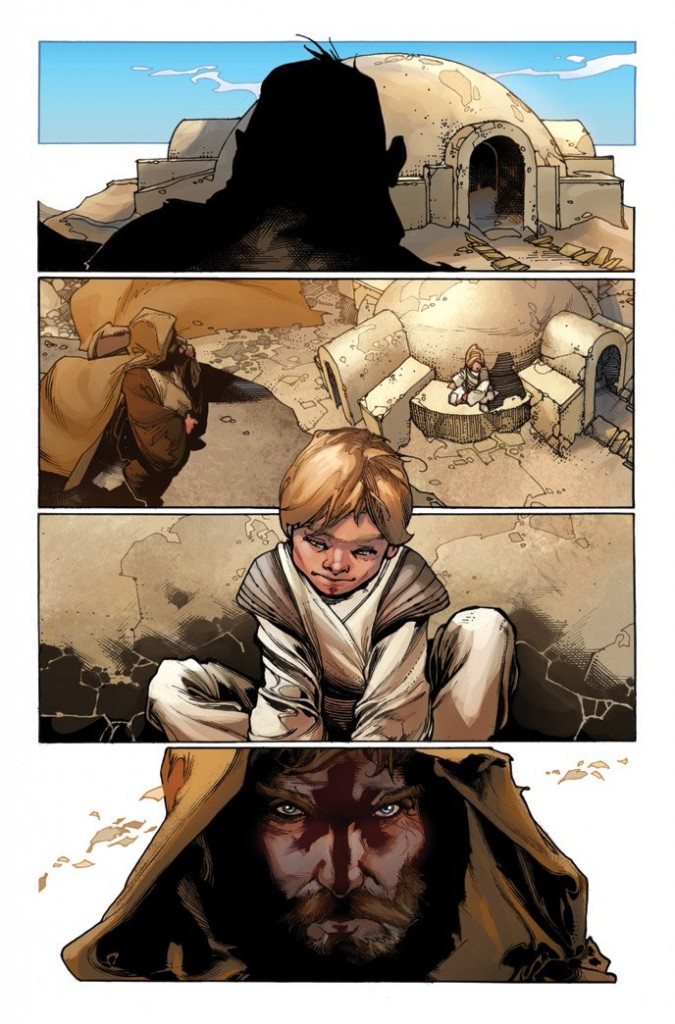 During his stay on Tatooine, Obi-Wan watched over a young Luke Skywalker from afar, who was being raised by his adoptive aunt and uncle, who almost needless to say did not want the young boy to train to be a Jedi or leave the moisture farm to embark on any dangerous tasks.

A few years ago, the “Ben Kenobi on Tatooine after Episode III” story was covered in a novel called Kenobi by John Jackson Miller. That was a solid novel, since purged from the Star Wars canon, along with all of the old Expanded Universe content. It was a solid book with an interesting story, though I will admit it had too many characters and subplots. The Star Wars comic series’ take on this same time period (and the one that is canon in the new continuity) is more streamlined, simplistic, and to the point. And perhaps most importantly, fun to read.

When you are doing a one-off story dealing with a classic character like Kenobi, there is a lot that you have to convey and accomplish in a single comic book. I am pleased to announce that these talented artists and writers have accomplished those goals here. We get a sense of Kenobi’s emotions, as well as his sense of confusion and uncertainty following the fall of the Jedi Order, yet also see him remain optimistic for the future and the day when he will introduce young Luke Skywalker to the Force. The Jabba thugs are fairly simplistic, one-dimensional characters but serve their purpose; this is Kenobi’s tale first. Readers see Kenobi struggling with his post-Jedi life, and it makes for one of the more intriguing Star Wars stories to date.

I (and apparently millions of others!) have been satisfied with nearly all of Marvel’s new Star Wars tales, and this one-off focusing on a post-Revenge of the Sith Obi-Wan Kenobi makes for some interesting reading. No fan of Star Wars should pass this story up; there are some great and gripping moments in its short but involving duration. Strongly recommended!

All images used in this review are the property of their respective copyright holders, including (but not limited to) George Lucas, LucasFilm, Disney, Marvel Comics, and 20th Century Fox.

Vacation - This Trip with the Griswolds ...