NOTE: This review may contain minor spoilers for those not familiar with the Dragon Ball franchise. Read at your own risk. 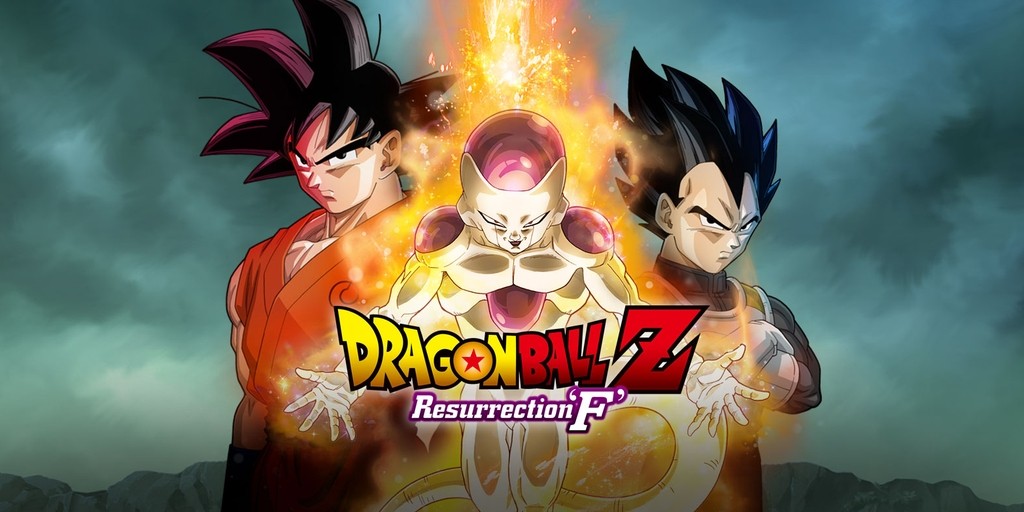 In recent years, the Dragon Ball name has been getting a long overdue revival, albeit with mixed results. New OVAs and TV specials featuring everyone’s favorite characters are coming out, but many long time fans have questioned the quality of these endeavors. As a die-hard fan of all things Dragon Ball, it saddened me to see new movies and specials coming out, which simply were not that good.

The first attempt at a “real” Dragon Ball movie (not merely a TV special or OVA) in recent years was Battle of Gods, which got a theatrical release in America last year. While the film had some interesting concepts, the end result was a bloated, slow-paced mess that was too humorous and did little to advance the series, despite the direct involvement of series creator Akira Toriyama. Would we ever again see another good Dragon Ball production? 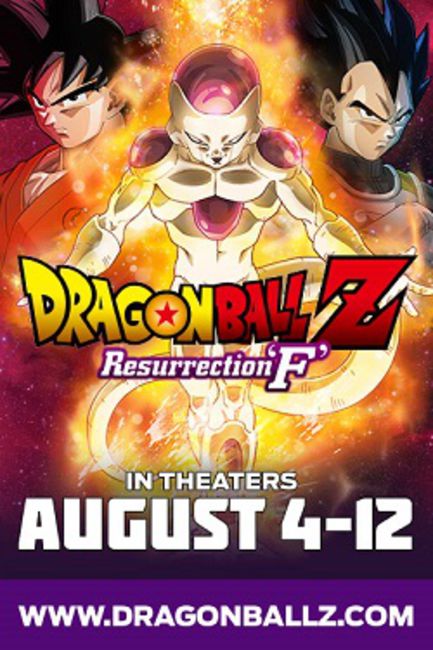 The film had a brief theatrical run in America.

A year later, in limited theatrical release (and presumably on home video this fall or so) we have Resurrection F, the latest Dragon Ball movie. Going along with the Japanese premiere of Dragon Ball Super, the latest television series, it is clear that Toriyama is once again claiming interest in his most popular and legendary property. Once again, unlike the older movies, he has taken a more direct interest, even claiming in interviews that the new movie includes a storyline he wanted to include in the original manga, had he been able to do so.

Some time has passed since the events of Battle of Gods. By now, Gohan has a baby girl, and Goku and Vegeta has befriended Beerus, the God of Destruction and his attendant/teacher Whis, and are training with them in their domain on a regular basis, looking to better themselves. Unbeknownst to our heroes, some of Frieza’s surviving henchmen have launched a plan to use the Dragon Balls to bring the tyrant back to life. The ruthless arch-nemesis returns to Earth with a new army, hell-bent on gaining revenge on the Earthlings for having foiled his plans in the past. 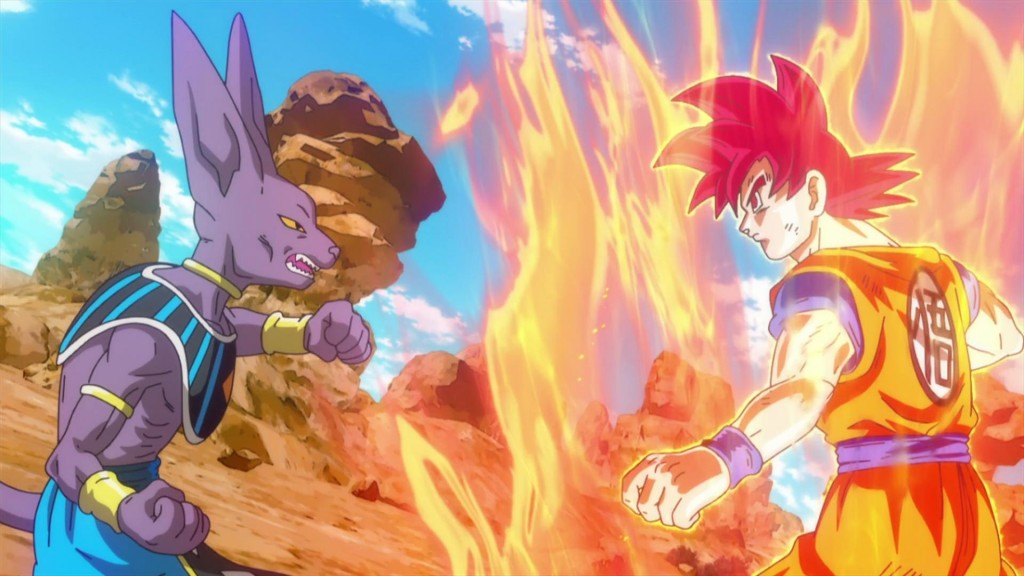 The film is the sequel to last year's Dragon Ball Z - Battle of Gods.

It is no secret, that despite my love of Dragon Ball, I have NOT loved the more recent movies, specials, and OVAs. Episode of Bardock was a stupid, mindless fanboy dream with no depth whatsoever. Plan to Eradicate the Super Saiyans was a vastly inferior remake of an OVA that really was not that good or original to start with. Son Goku and His Friends Return introduced a new character to the Dragon Ball mythos who brought absolutely nothing to the table, and bland, uninteresting villains. Even Battle of Gods, with its monumental undertaking to revive the series, languished and disappointed with its horrible pacing and needless return to the humor of the early Dragon Ball sagas. After so many blunders, does Resurrection F restore the series to its former glory?

The new film is not perfect, but it is far superior to any of those stinkers we have had to endure in recent years.

Resurrection F contains more action and a simple, easy to follow plot. You may be left confused if you are unfamiliar with the series and/or have not watched Battle of Gods, but fans should be satisfied with what they see here. Granted, there are a few minor pacing issues and character choices that are questionable, but overall the film brings the action and the necessary revival that Dragon Ball has been long overdue for, for years now.

First and foremost, bravo to the writers for actually giving characters other than Goku an emphasis here. Tien, Gohan, Piccolo, and even Master Roshi get a chance to battle Frieza’s minions, and watching these scenes is a ton of fun for long time fans like myself. Whereas Battle of Gods went overboard on the humor and was far too long, this particular film tends to be better paced, equally balancing most of these factors. The characters all act the way that they should, and our interest is piqued and maintained throughout. Fans will not be bored here, and the conclusion to an action-packed climax should not disappoint! 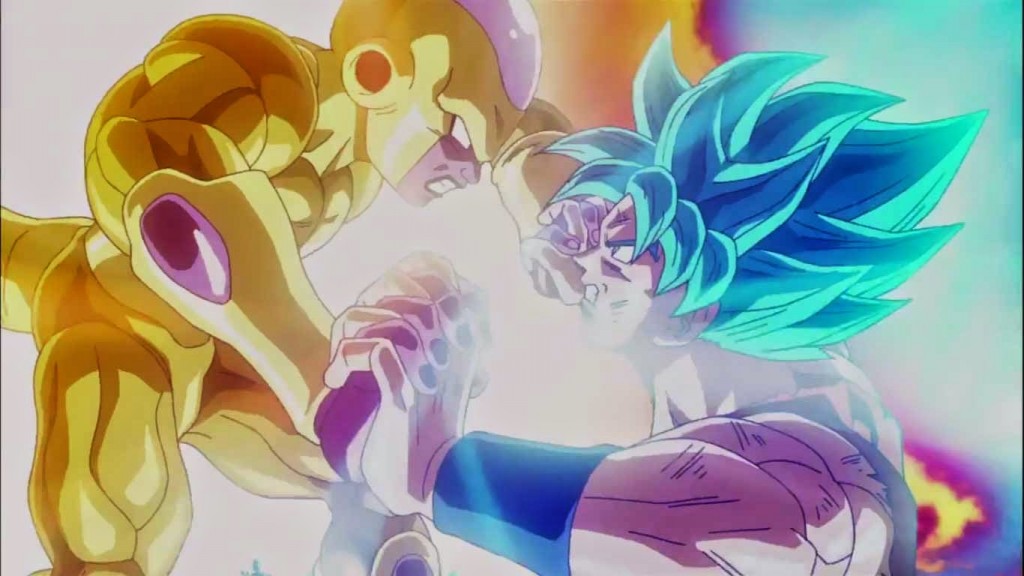 Legendary Dragon Ball villain Frieza returns, but our heroes have been in training as well!

Another thing worth mentioning here is that the English dubbed version of the film (which is what you will see/hear in theaters) is actually GOOD. I used to hate the FUNimation dub of the show with a passion due to the stupid and often inaccurate, childish dialogue, despite quality voice actors. But in recent years, as was beautifully demonstrated in their Dragon Ball Kai dub, FUNimation is stepping up their game and giving us more accurate and mature scripts, truer to the original Japanese presentations. The voice cast and writers definitely deserve some credit here.

That said, there are still some issues. With the arrival of this film, it is clear that the crew is getting better at bringing Dragon Ball into the 21st century. These were the biggest problems I had with an otherwise excellent movie:

First, Was it really necessary to include Jaco, the Galactic Patrolman, in this film? For the unfamiliar, he is the title character from a manga of the same name by series creator Akira Toriyama, which is a prequel/side story of sorts set in the Dragon Ball universe, occurring concurrently with a baby Goku’s arrival on Earth. You will not know who this guy is if you have not read the manga. His inclusion here feels like a blatant commercial for the manga in question.

Next, weird imbalance of the included characters. Master Roshi shows up to fight the villains, but Tien did NOT bring along Yamcha and Chiaotzu, even though they are STRONGER than Master Roshi? And where are Goten and Trunks? And Majin Buu? I applaud the writers for keeping the cast small (a big mistake Battle of Gods made) but some fan favorites are missing, and with no real explanation either.

The last substantial complaint I have is that there are still pacing problems. Clocking in at roughly 90 minutes, this is the longest Dragon Ball film to date (unless one counts the extended cut of Battle of Gods). Many portions of the film, namely the battle with Frieza’s henchmen, last far too long. Older Dragon Ball movies were rarely longer than an hour, and accomplished so much in the limited run time. This did NOT need to be a 90 minute movie, though I DO give major credit to those who brought us the film for holding our interest.

Resurrection F is not a perfect Dragon Ball film, but it is still a hell of a lot of fun, pitting our favorite characters against a returning nemesis who remains ranked amongst the series' most legendary villains. The film’s positives far outweigh the negatives; the first time I have said that in years when it comes to any sort of Dragon Ball production. For any fan, this new film comes strongly recommended!

All images in this review are the copyright of Akira Toriyama, Toei Animation, Shonen Jump, Bird Studio, Shueshia, 20th Century Fox, FUNimation Entertainment, and all other associated entities. For promotional purposes only. All rights reserved.