Home›Features›Ozzy Osbourne - A Look Back at Speak of the Devil Audio and Video Releases!

Ozzy Osbourne - A Look Back at Speak of the Devil Audio and Video Releases! 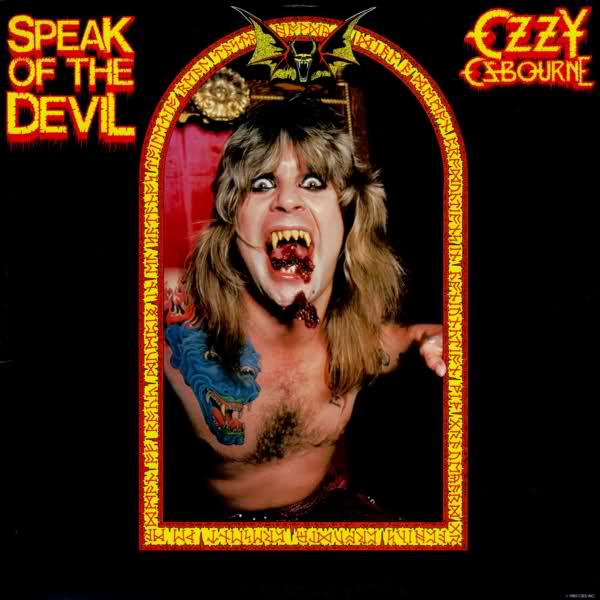 Speak of the Devil is the title of an Ozzy Osbourne home video release and a live album. Both feature the same lineup but different concerts.

By 1982, Ozzy Osbourne was well on the way to a successful, prosperous solo career, having made the ultimate comeback following his being fired from Black Sabbath in the late 1970s. But just as things were getting back on track, tragedy struck – a plane crash claimed the life of Randy Rhoads, Osbourne’s 25-year-old guitar virtuoso friend who had been so instrumental in the comeback at hand. Recordings of Rhoads in concert for a planned live album were shelved; these would eventually be released in 1987 as Tribute.

At this point, the Ozzy Osbourne Band was Osbourne teamed up with guitarist Brad Gillis (Night Ranger), bassist Rudy Sarzo (Quiet Riot), drummer Tommy Aldridge (Whitesnake), and keyboardist Don Airey (Deep Purple). This lineup of the band recorded a concert comprised of mostly Osbourne solo material in June of 1982, which aired as a Halloween special on MTV; this concert has been available on home video in Japan for years but strangely absent from the American market. In September, this version of the band recorded a live album of them performing nothing but Black Sabbath songs, released the following November as a double live LP. Both the live video and the live album were released under the name Speak of the Devil (Talk of the Devil in the UK). As such, the audio and video releases entitled Speak of the Devil are of the same Osbourne band lineup, but contain two completely different concerts. 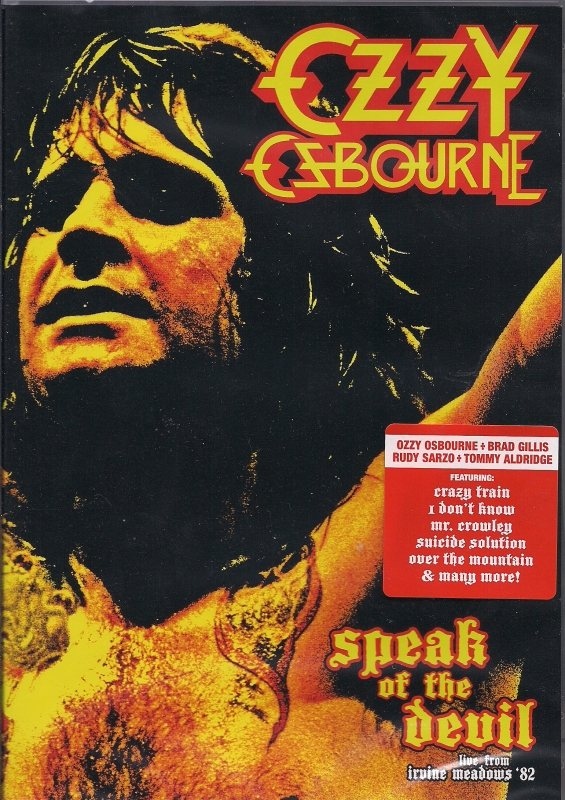 The Speak of the Devil video concert was released on DVD by Eagle Rock Entertainment in 2012.

The video release of Speak of the Devil finally hit America in an official DVD release in the summer of 2012 through Eagle Rock Entertainment. While the eventual album released under the same name was only Black Sabbath covers, the DVD features mostly Osbourne solo material, with a handful of Sabbath covers that conclude the show. 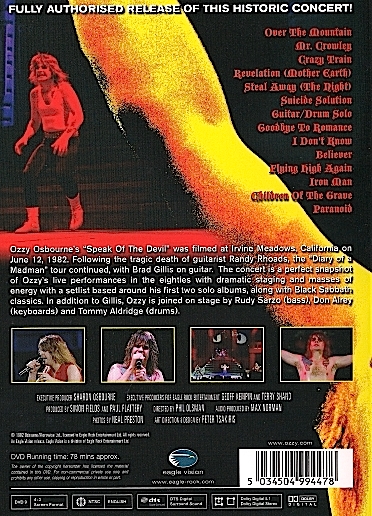 Tracklist from the home video version of Speak of the Devil.

The DVD release is devoid of extras aside from a booklet and suffers from horrid picture quality (it was shot on low grade video tape as a TV special in 1982, after all) but is still an epic, classic show. The castle façade on stage is just as iconic as the performance from the band; every one of these musicians brings their A game to the table here. Brad Gillis is the real star here; he does not merely mimic the late Randy Rhoads, but puts his own spin on things as well. Tommy Aldridge even gets to steal the show for a few moments with a barehanded drum solo! The assortment of tracks from the first two Osbourne solo records is solid, and all of them sound great in the live form they are presented in here. The on-stage theatrics and laser light effects are dated, but only add to the charm of the release. We even get to see the band stage a mock hanging of a dwarf named “Ronnie” (no doubt a stab at the short-statured Ronnie James Dio, who was then fronting Sabbath. The dwarf who appeared on stage during these shows was John Allen, who played the minor part of “Kaiser” in the film Blade Runner.)

There have been assorted rumors as to whether or not parts of this show were rerecorded, but fans will not care. It is a shame that this lineup of Osbourne’s band did not record an actual studio album; Gillis is a kick-ass guitarist and definitely makes his presence known here. The always-dependable bassist Rudy Sarzo is at his finest as well (interesting trivia – following the death of Randy Rhoads, Sarzo wanted to bring in his brother Robert to be Osbourne’s new guitarist). 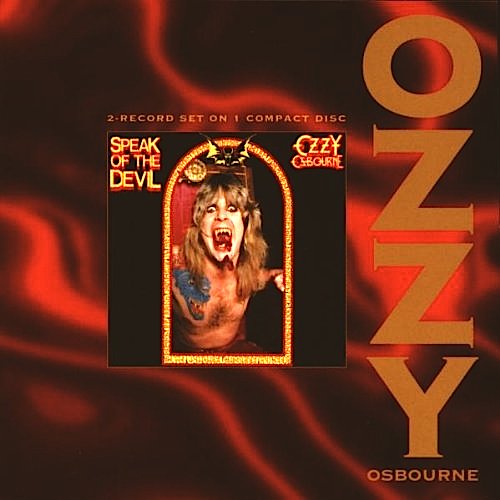 Speak of the Devil (the album) was not remastered and reissued in 2002 like the bulk of Osbourne's solo catalogue was, so the 1995 remastered version is the most abundant release on the market.

The double live album was recorded in September of 1982 and released roughly two months later. This time around, this incarnation of Osbourne’s solo band recorded a release of nothing but Black Sabbath covers from the classic eight albums featuring Osbourne; of the eight releases only Technical Ecstasy is not represented in this setlist. Osbourne himself has made it clear that he does not think much of this release, and more or less only did it to appease the record company. He had also claimed that if he was putting out a live record, it would have nothing to do with the late Randy Rhoads, hence the lack of songs from Blizzard of Ozz and Diary of a Madman. 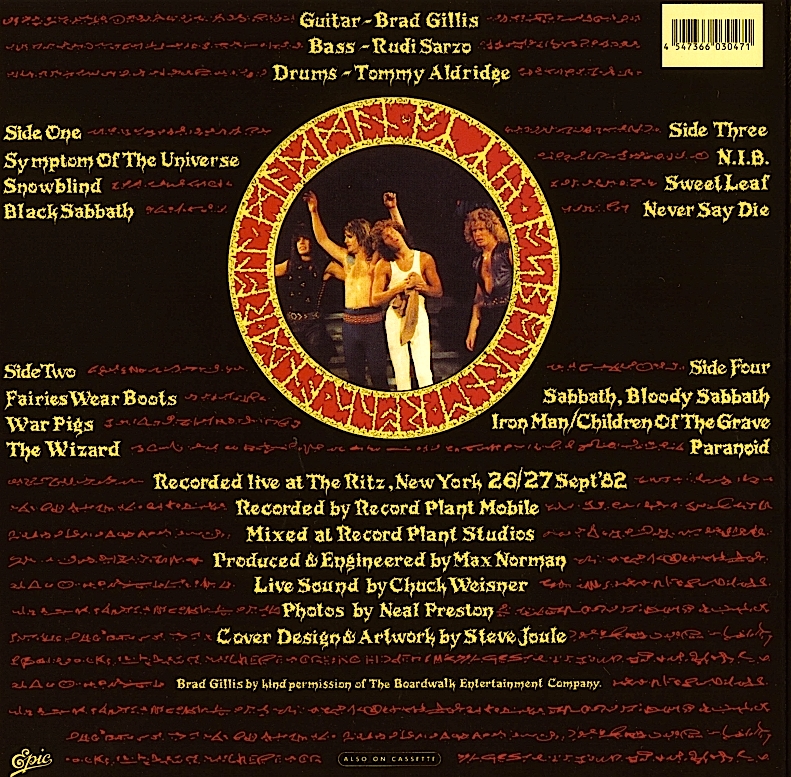 This concert sounds great despite it being comprised only of Black Sabbath songs. This version of the band proved they were clearly up for the task at hand; all of the songs are played with energy and enthusiasm. While the majority of the songs are “the hits” when it comes to the old Sabbath catalogue, I do give the band major credit for pulling “Never Say Die” and “Symptom of the Universe” out of the vault, making this a diverse and interesting concert. Osbourne brings out his signature sense of humor between select tracks as well!

Speak of the Devil (the album) was issued on CD but initial releases omitted “Sweet Leaf” due to time constraints. It was restored to the running order for the 1995 remastered version. The album, however, was NOT reissued/remastered in 2002 along with the majority of Osbourne’s other albums, likely due to his distaste and disdain towards the release itself. The 1995 remastered version is out of print but still fairly abundant online and in used record stores. Be sure you are getting the 1995 version as it restores “Sweet Leaf” to the running order.

If you are an Ozzy Osbourne fan, both of these often-overlooked releases, video and audio alike, are highly recommended. This is an era of Osbourne’s career that all too often gets neglected, but did spawn two superb live releases that are worth your time and money if you are a fan.