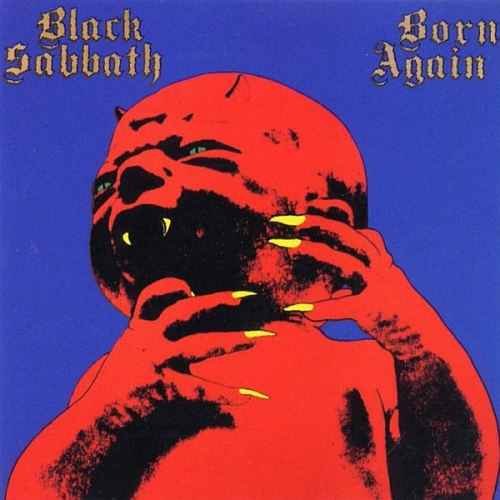 Born Again is the only Black Sabbath album to feature Ian Gillan. It was released in 1983.

By 1983, the future of Black Sabbath was up in the air. Vocalist Ronnie James Dio and drummer Vinny Appice had split from the group amidst the mixing controversy of the Live Evil record; Ozzy Osbourne had been fired from the group several years earlier. The group had switched management back to Don Arden, who had managed the group during the latter half of the classic Osbourne period (Don was the father of Sharon Arden/Sharon Osbourne). Initially, the group had intended to end the Black Sabbath name here, making “Born Again” a new supergroup that would feature Iommi and Butler alongside other top artists of the day.

Numerous vocalists were considered for the new project, but the group eventually settled on legendary Deep Purple vocalist Ian Gillan, at the suggestion of Arden, who also recommended that the group continue using the familiar Black Sabbath name. Vocalists considered for the project included Robert Plant and David Coverdale (who had replaced Gillan in Deep Purple). The band even got an audition tape from Michael Bolton, who at the time was still very much a rock singer. These sessions also marked the return of drummer Bill Ward to the band, who had not performed on a Black Sabbath album since 1980’s Heaven and Hell.

The sessions at hand spawned the album Born Again, released in August of 1983. While the album was a commercial success and charted surprisingly well on both sides of the Atlantic, behind the scenes was a different story; the album has also been subjected to a mixed reception from fans and critics. It became apparent that Gillan’s singing and songwriting style did not mesh well with the ways of the classic Black Sabbath members, making for a shaky collaboration from day one. The production of the album has long been the subject of criticism as well; demo/rough mix recordings exist that have cleaner, less muffled sound than the final released album! Bill Ward relapsed into drinking, resulting in him being replaced by drummer Bev Bevan (of Electric Light Orchestra (ELO) fame) for the forthcoming tour dates (Both ELO and Sabbath were managed by Don Arden). In the aftermath, the band fell apart, though the Black Sabbath name would eventually continue in other incarnations, with Iommi remaining the band’s one constant member. Ian Gillan would join a reunited Deep Purple, and has been back there almost ever since aside from one brief absence in the late 80s/early 90s.

Looking back, over three decades later, how does Born Again measure up? I will be the first to say that this album sounds NOTHING like Black Sabbath, despite having three fourths of the classic lineup. It also sounds nothing like Deep Purple, despite having Ian Gillan as frontman. And, you know what else?

Born Again is more than just the name of an album; it describes these recordings perfectly. The band clearly wanted to break away from the past and create something completely new and different. This is one of the hardest, heaviest, and gloomiest records in the entire Black Sabbath canon, and despite the mixed reviews, I will stand by this one and call it one of my favorites. Ugly devil baby album artwork and muffled, murky production aside, the recordings here are amongst the band’s most underrated. It is a shame this incarnation of the band did not gel better and produce further studio recordings.

“Trashed” kicks off the album, hitting you immediately with straight-up hard and heavy, merciless sounds. If you want to start an album off hard and heavy and get the attention of the listeners, a song like this is absolutely the way to do it. “Stonehenge” serves as an intro to the ominous and foreboding “Disturbing the Priest,” which ranks as one of the record’s most ambitious and powerful songs. Another short instrumental, “The Dark,” serves as the intro to “Zero the Hero,” one of the more popular cuts to emerge from the album. With straightforward rock passages and lengthy instrumental sequences, this one is another classic gem from a period of Black Sabbath that never seems to get the proper credit; it closes off Side One of the record in fine form.

Side Two is launched with one of the fastest and most aggressive songs to carry the Black Sabbath name; “Digital Bitch,” which is a not-so-subtle stab at someone the band was not too fond of. The title cut is one of the gloomiest and bleakest of all Black Sabbath songs; not that this was ever really an optimistic or happy band to begin with. “Hot Line” probably comes the closest of any of the songs on the album to capturing Ian Gillan’s classic Deep Purple sound, but even then, still manages to maintain a feel that is more consistent with the sound of this record than his early 70s glory days. Closing things out is “Keep it Warm,” which is a slower and more melodic rocker that makes for a fitting coda to this oft-forgotten gem of a classic hard rock album. 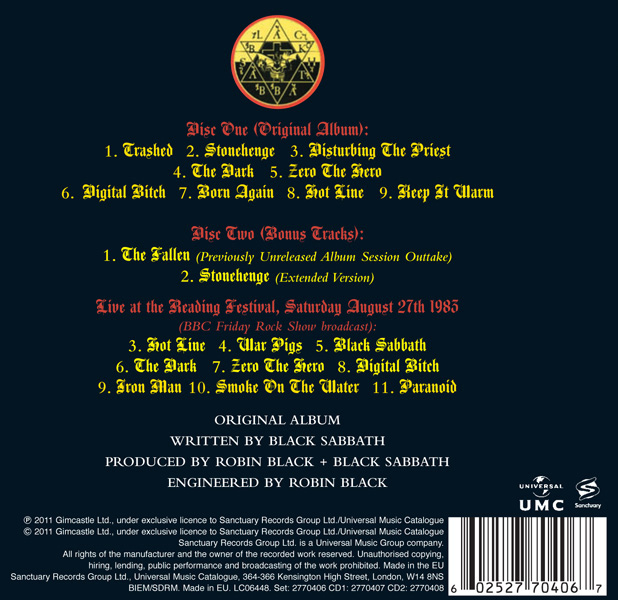 Tracklist for the two-disc Deluxe Edition release of the album.

A few years back, the album got the Deluxe Edition treatment. Essentially, the bonus disc included with the album contains an extended version of “Stonehenge” along with the previously unreleased outtake “The Fallen,” both of which are from the original demos/rough mixes for the album. The highlight, though, are the live Friday Rock Show tracks recorded by this lineup of the band (with Bev Bevan drumming) which features a mix of songs from the album and older Sabbath cuts, plus an obligatory performance of “Smoke on the Water.” Disappointingly, it does not include the other demos/rough mixes, which are a nice piece of history that merited inclusion here. They can be found for listening online on various sites, however.

Born Again, admittedly, is not an album for everyone. People expecting a Black Sabbath album or an Ian Gillan/Deep Purple album may be a bit put off by the fact that this record is neither. But those fans of classic hard rock and heavy metal who want to see their rock heroes trying their hand at something different, harder and heavier alike, would be wise to give Born Again a listen. This is an album that absolutely must be rediscovered. The Deluxe Edition, featuring the live bonus tracks and more, is well worth picking up for any fan. It is definitely one of the oddities in the Black Sabbath catalogue, but Born Again gets my absolute highest recommendation.