Home›Reviews›Aftermath - The First Post-Return of the Jedi Novel in the New Star Wars Canon!

Aftermath - The First Post-Return of the Jedi Novel in the New Star Wars Canon! 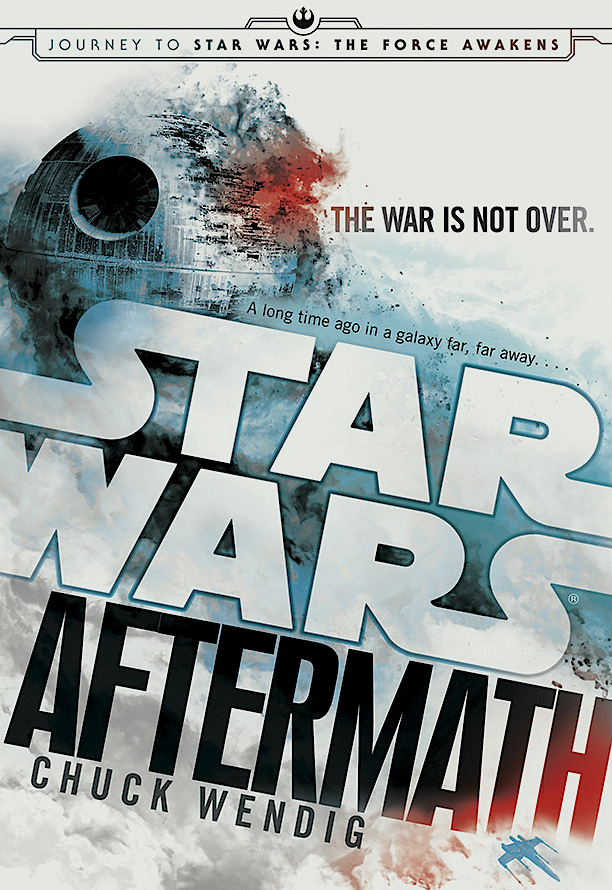 Aftermath is the first Star Wars novel set following Return of the Jedi in the new Expanded Universe canon.

We are on the home stretch to Star Wars Episode VII: The Force Awakens opening in theaters! September 4 launched Star Wars: Journey to The Force Awakens, a series of releases featuring novels, comics, and other media leading up to and building further anticipation for the release of the new movie.

Aftermath, by Chuck Wendig, is a new novel serving as the, for lack of a better way of putting it, aftermath of what happens across the galaxy following the destruction of the second Death Star and the deaths of Emperor Palpatine and Darth Vader. It is to be the first in a trilogy of novels, building things up and setting the stage for what we will experience in the new movie, which will be set three decades following Return of the Jedi’s conclusion (although the latter books in the trilogy apparently are not arriving as soon as fans had hoped). As one of the first stories set in the new chronology AFTER the conclusion of the old movies, it is one of the most eagerly awaited Star Wars stories to date!

Aftermath picks up not long after the fall of the leaders of the Galactic Empire and the destruction of their deadliest weapon. The Rebel Alliance that fought the Empire has reformed itself as a New Republic, restoring democracy to the galaxy. But the war is far from over. Remaining high-ranking officials of the Empire have gathered on an Outer Rim planet for a summit, deciding how to pool their resources and regain the upper hand against Republic forces that now have them on the run. Meanwhile, the New Republic has caught on to them and launched efforts to learn what they can, only to have one of their own captured by the enemy. On this out-of-the-way planet, a young smuggler/shopkeeper, his estranged mother who left him to join the Rebels, a female Zabrak bounty hunter, and a former Imperial loyalty officer join forces in an effort to infiltrate the Empire’s meeting and rescue their prisoner.

Needless to say, this was one of my most eagerly awaited Star Wars books of the year. Critics and fans were quick to attack this book upon its release for a number of reasons. While I agree with much of what their respective reviews were saying, the good does outweigh the bad here, and it does help to set the scene for future Star Wars stories, including the new movie.

The novel primarily focuses on new characters and not the familiar faces from the movies; Han Solo and Princess Leia are more or less relegated to cameos, while Luke Skywalker does not appear at all (although he is mentioned on a few occasions). That said, the core groups of characters, Republic and Imperial alike, are all well fleshed out and become believable, three dimensional characters. There is no saying if any of them are going to end up on the big screen eventually, but this is definitely an exciting way to start building the bridge towards Episode VII. It does manage to bring together elements of the past, present, and future in the Star Wars universe well. That said, do not expect this novel to set up everything for the new movie; it is still set in the immediate post-Return of the Jedi time frame and is a ways off from the 30 years later that The Force Awakens will be set, although we do see brief hints of what is to come in that regard.

One unusual feature of the novel (which actually works well) is that, between a number of the chapters, we get brief “Interludes” that give a snapshot of life across the galaxy following the fall of the Empire, and what people are experiencing in all sectors. This is an interesting feature that definitely helps to paint a picture of a post-Palpatine Star Wars universe, and where things are going, for better or for worse.

I will also add that the novel DOES end on a high note and definitely sets the stage with plenty of suspense for what is likely to come in the next novel in this trilogy.

That said, as much as I did enjoy this novel, I did have a few problems that showed themselves throughout the book (if you have read other reviews this is all likely to sound quite familiar).

-The biggest issue is the storytelling style. Wendig writes in a present tense, which is unusual, and makes the novel feel like something out of a roleplaying log. I am not familiar with Wendig’s non-Star Wars writing endeavors, but this was definitely a strange way of doing things. Does it ruin the book like so many others have claimed? No, but I would still prefer my Star Wars stories told by other authors. Other phrases and dialogue sound distinctly non-Star Wars, and things like “assumed deaths” of a character are overdone, only to have said character back alive and well before you know it. That said, the book is not a total loss – in fact, far from it.

-In what seems to be an increasing trend in recent Star Wars literature, there are “token” LGBT characters included. I have no problem with any story (Star Wars or otherwise) including characters like this, but it feels like it is starting to become something obligatory in every Star Wars story in the new canon to have, and is just overdone. These characters are handled well in the novel (these elements never take center stage and rightfully so), but you cannot help but feel like this is just being done to make the Star Wars universe more “politically correct.”

-There are too many characters and too much going on. Most of this is handled well in the form of the Interludes that are included in the story, but the “main” story attempts to bring in too many characters and subplots, often with mixed results. The core story here is interesting and usually handled quite well, though, so things do not get TOO bogged down.

Aftermath tends to be getting a bad reputation from a number of fans and critics, but overall I was impressed for the most part. It does a good job setting up future Star Wars stories, and I am eager for the next installments in this book trilogy. If you are a fan and are looking for something to do until The Force Awakens comes out, Aftermath will make for a worthy read.

Knee Deep in Purple and Tailgun - ...