I Prevail Rocks House of Blues

This past weekend, I had the privilege of interviewing two awesome dudes from the Detroit, Michigan band, “ I Prevail ”! Brian Burkheiser and Eric Vanlerberghe are two of the sweetest guys I’ve ever met. They were so polite, humble, and overall awesome guys. They joked around with me, and we had a full conversation before the interviewed even started. They answered all of my questions in full, and went above and beyond to make this an amazing interview for me. They also put on an amazing show. They push themselves to be as energetic and interactive as they can be to really make their shows special for their fans. It was an awesome experience, and definitely great seeing them perform live for the first time. One of the best experiences I’ve had as a journalist!

ZR: What was your weirdest fan experience?

Brian: A girl at a merch table had me sign a potato, when someone pulls a potato out of their bag you’re not really expecting that. It sounds as weird as it was.

Eric: Some dude ran up and kissed me on the cheek, didn’t say hi or whatever. Just kissed me and ran, so that was interesting.

Brian: Was he an I Prevail fan, that is the ultimate question.

Eric: Oh I don’t know he just ran up and kissed me on the cheek, said “I love you guys!” and ran off.

Brian: Yea, most of our fans are pretty cool, so we haven’t had too many… weird experiences. Just potatoes and kisses.

ZR: What is the difference between touring in home towns/familiar places, rather than touring around the country?

Brian: It’s a totally different experience, we’ve played our hometown 5 or 6 times, and we kind of know what to expect each time because it’s our hometown; not that many people go crazy. The smaller states that don’t get a lot of shows really appreciate it, not that other states don’t. Every city has fans that just go crazy in different ways.

Eric: Or when you go back to places that you’ve been before, the core, die-hard fans, you see them again and they message you and we always try to message back. The states that we’ve never been to, we go there and aren’t sure what to expect, because there could be 100 people or 2 people, or someone’s mom there. Is it going to be a sold out show, or just that one person, which is awesome. It’s thrilling.

Eric: It used to be Crossroads, because when we wrote that song, I mean everything we put in behind it, we just love it when people sing back. But, recently it’s been either Face Your Demons or Deceivers. With Face Your Demons you get everyone all hyped and moshing, and then Deceivers,  just getting down to the fans level, down on the barricade. Just touching everyone’s hands and getting face to face with them, and having them scream the words back.

Brian: Mine would have to be Love, Lust, and Liars. I love that song, Eric and I had a couple ex’s who were kinda shitty, and dicked us over. But you know, every night we get to go and put some aggression into it, and see the fans that have that similarity. When you see people singing back the lyrics, it makes you feel good.

ZR: What song from the album has the most meaning to you personally?

Eric: Yea Crossroads, I mean it’s hard, it’s like picking my favorite sibling or child, not that I have a child!

Brian: Crossroads, I mean I know that we’ve both dealt with depression in our lives and so when we were writing this song we wanted to put a positive message out there. So many people have gotten lyrics tattooed, and have come up to us and told us how the song got them out of a tough place. So that one is the most rewarding, I’d have to say.

Eric: I’d have to agree with that, I feel the same way.

ZR: How did you guys come up with the band name ‘I Prevail’?

Brian: We were sitting in our producer’s basement one night, and it was finally time to come up with a band name, so we were like “What are we gonna name it?!” We were just throwing around words, we’re from Michigan… Detroit.

Eric: So if you know anything about Detroit, it’s like when you hear Detroit you think of just really run down.

Brian: Everyone talks negative about it… But we wanted a positive message. I think it was Steve who threw out the word prevail, and we thought it was cool but we needed to do something else with it.

Eric: We were all just spit-balling. And someone was like “How about I Prevail?” Like I will prevail and rise above these stereotypes, and the music is mostly positive.

Brian: So we started asking friends and family what they think, there might’ve been one person who didn’t like it, but pretty much everyone else was like “That is the name!!”

ZR: How did you decide the kind of singing style you wanted to use?

Brian: It’s kind of funny, when I started the idea or whatever; I knew I couldn’t scream so…

Brian: But when we got together we decided on a 50/50 mix. We still have all of our clean, catchy elements, we jump around and what-not, but we still put that aggression and scream your heart out type stuff. All the sudden we started blending it together and everybody says Eric and I’s voices work well together.

Eric: Most of the bands in the past five years or so, you know the singer has a really high pitched voice and then the screamer you can’t understand a word he says, and I like that music too. But having Brian’s deeper voice and me enunciating the words more seems to draw more people, because it’s a little different.

Brian: I think it’s also because we all like a broad range of music genres. So, when it comes to writing our music, the elements we use are all over the place, and you’ll see that in the next album.  We like to mix things up a little bit.

ZR: How would you describe your music to people who are listening for the first time, or want to explain it to their friends but don’t know how?

Brian: But also elements of like rock, and real hardcore.

Eric: Most people describe it as like heavy rock.

ZR: By the time a song makes the album, are you ever fully satisfied with it?

Brian: It varies from day to day, one day we’ll be like “Oh this is it!” but as you keep listening…

Eric: They call it like studio syndrome, so by the time you listen to it for the 30th time you’re like “Man, it would’ve sounded cooler if we did…” then we have to go back and change it.

Brian: We kind of make group decisions with the songs that we pick for an album.

Eric: But everything that was on the EP was very meaningful when we wrote it. So every one of those songs are important.

ZR: On social media, it’s easy to portray touring as a “party scene”. People have this idea that it’s always a party. Is that true?

Brian: No, not with all of us anyways. There are a lot of nights when you’ll find us in bed at like 9.

Eric: I mean we do go out in some of the towns every now and then. And there are some nights when we’ll hang with the other bands, or hang out on the bus, and if you’re old enough, have a couple beers, and we’re all old enough.

Brian: We all realize too that this is a career, and I want to be doing this for the next 10-15 years. I would hate for this year to be great and then next year have it all go in the trash because of one stupid decision.

Eric: We’re still doing shows, so why risk it with other stupid stuff?

Brian: We definitely like to be the “lame” band. 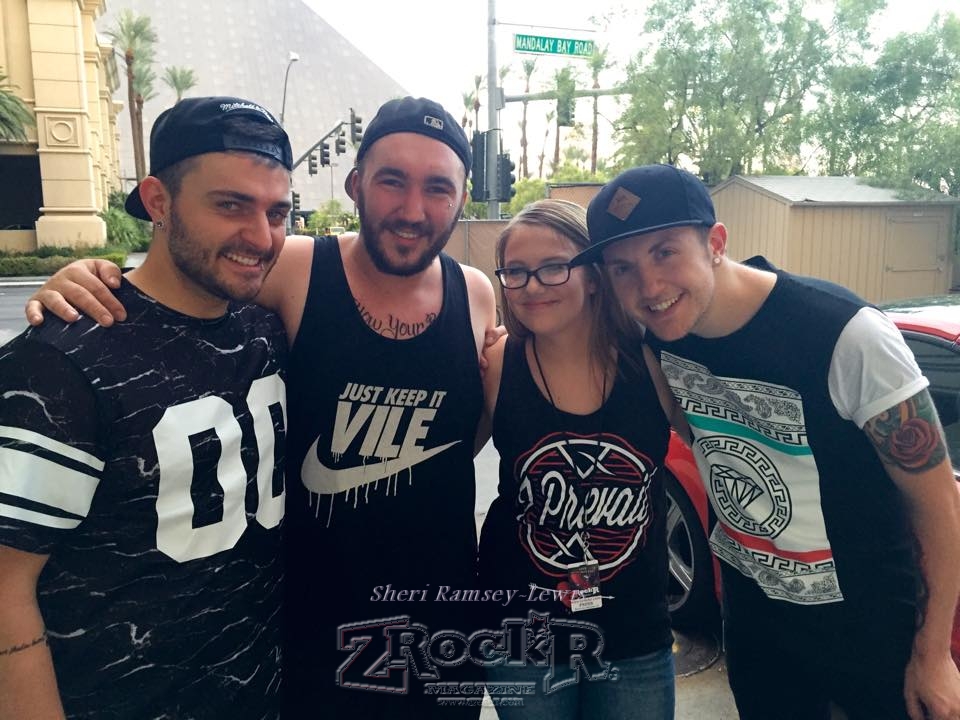 From this writer’s point of view, the guys from I Prevail are anything but lame.  If you haven’t checked them out yet, I encourage you to grab their EP Heart vs. Mind and give it a listen.  You won’t be disappointed.