Home›Features›Great White - A Look Back at the Band's Earliest Records, Before Their Commercial Peak!

Great White - A Look Back at the Band's Earliest Records, Before Their Commercial Peak!

Great White was a huge band in the 80s, starting with the release of their classic 1987 album, Once Bitten. From there on out, even well into the 90s, the band scored countless hits, ballad and rocker alike, winning over a large fanbase. Even in this day and age, in which there are two versions of the band due to the all-too-common disputes and in-fighting, the group remains popular.

Great White became a popular band because they struck the happy medium between ballads and rockers, and had a diverse assortment of influences, including blues sounds. What many fans do not know, however, is that prior to the band’s commercial breakthrough, they had a much rawer and heavier sound, yet still managed to be musically diverse. This era of the band was seen on their debut EP, their self-titled first LP, and their sophomore LP, Shot in the Dark.

You never hear anything from this era on the radio at all (except for “Face the Day” from Shot in the Dark, which was arguably the band’s first hit) which is a shame, because it is a fantastic period of the band whose sound was never recaptured on the band’s more commercial releases. A song from these releases occasionally finds its way into the band’s setlists, but for the most part this remains an era of their career that is criminally neglected. Will fans want to go back in time and explore this earlier era of the band? 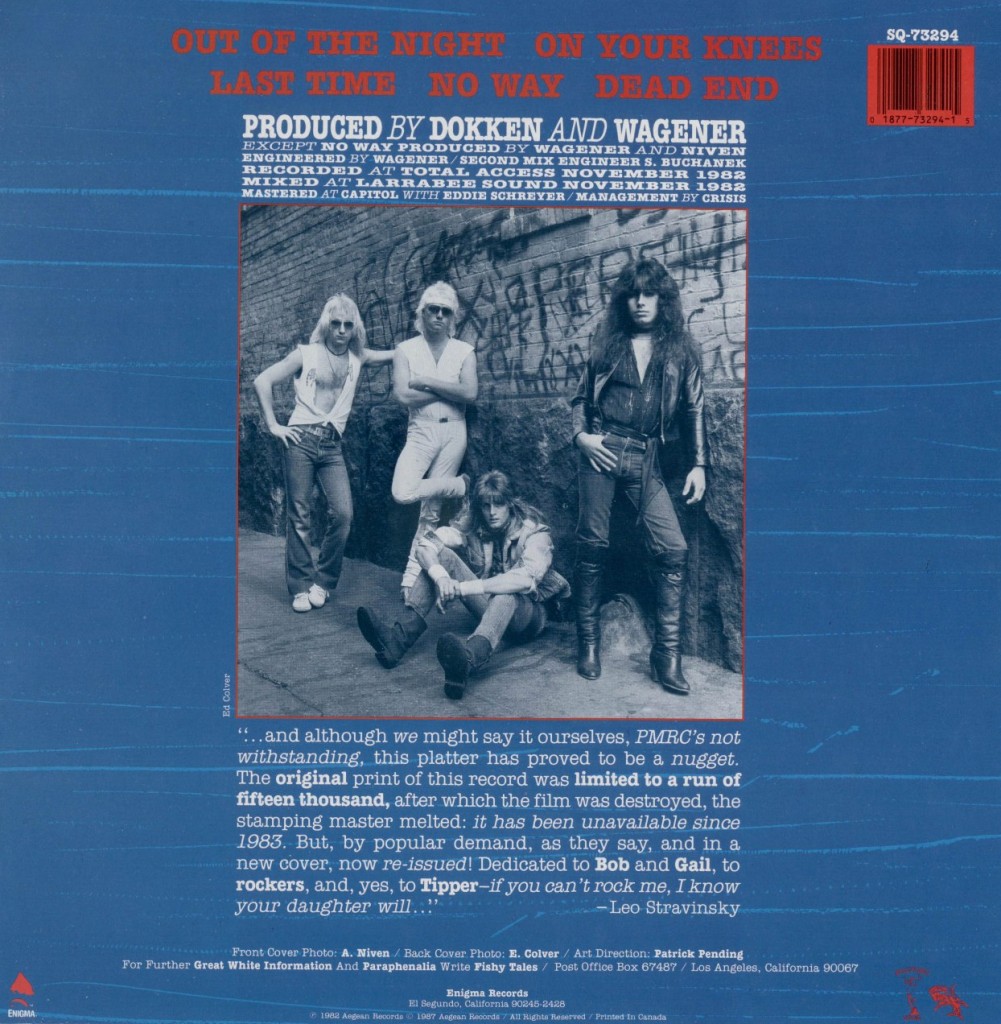 Rear cover of the reissued EP, which at different times has been released under the names On Your Knees and Out of the Night. Producers on the EP include Michael Wagener and Don Dokken.

This EP is where it all began for Great White. While there are only five songs on here, all of them are superb, and beautifully capture this early era of the band. “Out of the Night,” “On Your Knees,” and “Dead End,” all solid tracks in their own right, were later rerecorded for the 1984 debut LP, with more elaborate production . Upon hearing this heavy and raw sound, you may be surprised to discover that this is the same band that would later record “Save Your Love” and “Once Bitten Twice Shy!" “Last Time” is a great mixture of heavy and melodic, with some fantastic guitar work from Mark Kendall. “No Way” is similarly impressive, giving this EP yet another solid rocker, which also brings in some light acoustic elements on top of things. Despite the obvious low production budget and rough sound quality, this was a fantastic first taste of Great White for the world to experience. 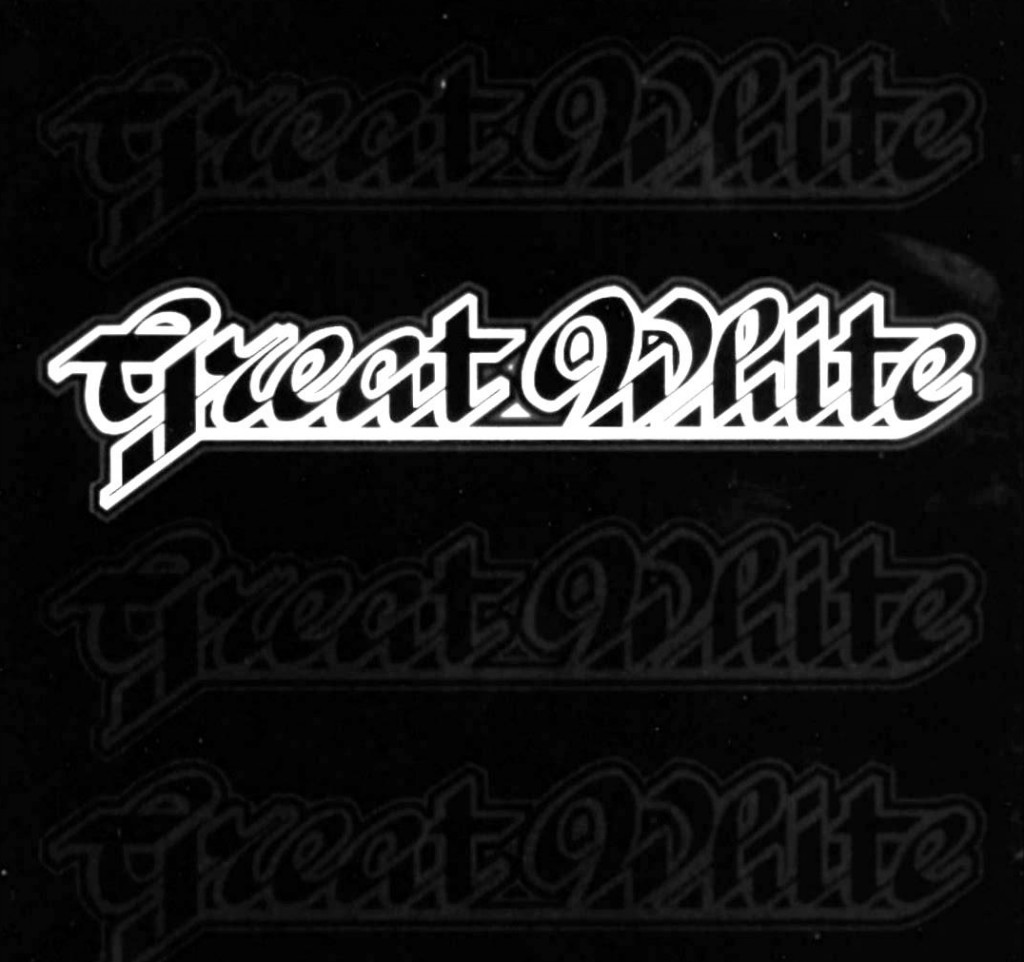 Great White is the self-titled full-length debut album from the band, and the final release to feature original drummer Gary Holland.

The EP showed us what the band was capable of. If that is the case, than the band’s 1984 LP was the payoff, allowing the band to fully realize their hard and heavy musical vision of the day. The rerecorded “Out of the Night,” which kicks off the album, is one of their hardest and heaviest songs, and definitely feels “fuller” and heavier than its EP counterpart. More hard and heavy rock comes your way in the form of “Stick It,” the second cut, and one of the strongest presented here. The most unexpected surprise of the album is a cover of the Who classic “Substitute,” which maintains the band’s heavier sound of the early era (helped largely by its guitar intro), yet also somehow still retains the classic pop sensibility of the Who’s original version. Much like “Out of the Night,” the heaviness of “On Your Knees” benefits from the bigger, more elaborate production, as opposed to its EP counterpart. The album’s best cut is arguably “Streetkiller,” a heavier track that sounds more like something out of a different music scene altogether. The rerecorded “Dead End” closes things out excellently. This album maintains a sense of musical diversity throughout, but it remains heavier all around than the band’s later (and far more popular) material.

The reissue of this album, done under the title Stick It, features five bonus tracks. Naturally, that is the version of this release to get if you can find it! 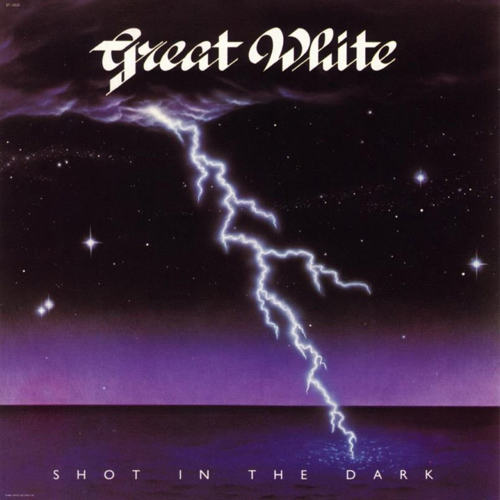 Shot in the Dark is the second full length release from Great White, released in 1986.

The band’s second full-length album could arguably be considered the beginning of their more commercial era, but it still maintains much of the rawness and heaviness of the prior releases. It was also the first album to feature classic drummer Audie Desbrow, who replaces Gary Holland from the EP and first album. Keyboards become more prominent on this record (keyboardist Michael Lardie would become a full, official member of the band on their next release). “She Shakes Me” and “What Do You Do” are solid rockers that kick things off well, hinting at the band’s future, more commercial sound and later successes. The band’s cover of Angel City’s “Face the Day” was, far and above, the most popular song to come from this album (the group would later score another hit in the form of an Angel City cover as well, “Can’t Shake It.") The surprise cover on the album is the Spencer Davis Group’s “Gimme Some Lovin,” which works far better than one would expect! The album’s title cut is its highlight, with a great mixture of heavy and melodic; the fact that this one was not a bigger hit is absolutely criminal. The rest of the tracks featured here are generally on the melodic side, yet still maintain a rawer, heavier sound than the more popular follow up records.

These releases are all severely underrated, and are often overlooked in terms of the hits from their late 80s/early 90s “golden years.” Much heavier, rawer, and less commercial than what was to come, these releases are a complete surprise. That said, no true fan should ever overlook where it all began for this legendary classic hard rock band. The band’s first three official releases all come strongly recommended!

Meliora: The Unholy Ghost in the Trinity ...