Home›Features›Dio - A Look Back at Sacred Heart, the Underrated Third Studio Effort!

Dio - A Look Back at Sacred Heart, the Underrated Third Studio Effort!

By 1985, Ronnie James Dio’s solo career with the Dio Band was in full swing. He had proven himself with Rainbow and Black Sabbath on multiple releases, and with the arrival of his solo band, had further proven himself musically. Alongside drummer Vinny Appice (formerly with Dio in Black Sabbath), bassist Jimmy Bain (formerly with Dio in Rainbow), guitarist Vivian Campbell (later of Whitesnake and Def Leppard) and keyboardist Claude Schnell, Mr. Dio had established himself as a lasting force in the world of hard rock and heavy metal.

Dio’s first two albums, 1983’s Holy Diver and 1984’s The Last in Line, were undisputed rock and metal masterpieces. Both records contained several classic cuts, and remain the favorites of many a Dio fan. How would the band follow up those two unadulterated classics?

It is not likely that the band knew it at the time, but the band’s next release would be the final Dio album to feature guitarist Vivian Campbell (and unlike many members of the band that would “come and go” over the years, Campbell’s departure was permanent). Campbell played on the first half of the Sacred Heart Tour that followed the album’s release; he was subsequently replaced by former Giuffria and Rough Cutt guitarist Craig Goldy. 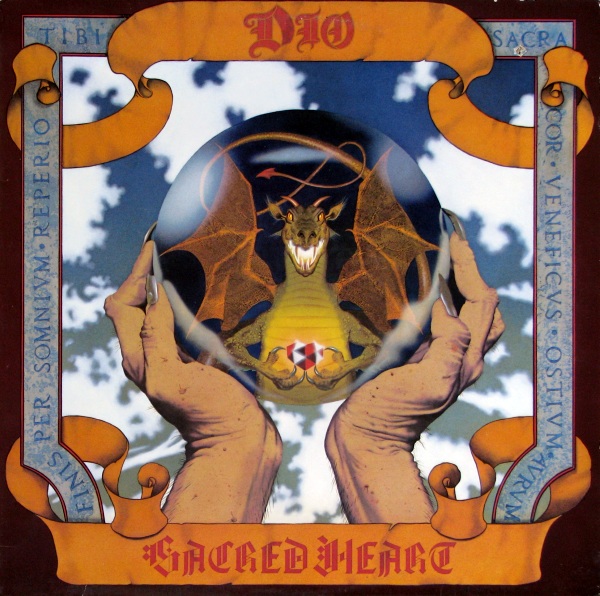 Sacred Heart was released in 1985. It was Dio's third album, and the final one with guitarist Vivian Campbell.

The tour for the album, which featured Campbell being replaced by Goldy, was one of Dio’s most epic of all tours, complete with a giant, elaborate castle and drawbridge set, a dragon as large as the stage, and other props that added an unforgettable feel to the experience, including Vinny Appice drum soloing in the dark with lightsaber-style sticks. Video of this tour is available and it is worth seeing for anyone who calls themselves a Dio fan.

But the album itself is the subject of this review, so let us return to that. When Sacred Heart came out in 1985, it marked a departure from the style of the first two Dio albums, with keyboards being featured more prominently, and a sound that could be described as more commercial and melodic compared to the earlier records. Despite this, it did spawn some hit singles and some of the most popular Dio solo cuts. The first two Dio albums get talked about all the time. So why no love for Sacred Heart? 30 years after its release, how does Dio’s third album hold up?

I would not put Sacred Heart on the same pedestal that I would Holy Diver and The Last in Line, but that is only because those two albums are amazing and more or less represent the pinnacle of all that is great in the world of hard rock and heavy metal, and are the highlight of Ronnie James Dio’s career. Sacred Heart is a more commercial effort than either of them and certainly more melodic in places, but this record is still heavy enough to satisfy any rocker or headbanger out there.

The guitar work is one of the true highlights here; Vivian Campbell’s solos here are some of the best of his career, rivaling even his work from the first two records. It is almost as if he knew that this would be his last record with Dio, so he gave it his all and made his work stand out throughout the album’s duration, on everything from the melodic cuts to the more straightforward rockers. While he would go on to greater fame with Def Leppard upon becoming a member in 1992, his work with Dio is the highlight of his career. Perhaps nowhere is that truer than on Sacred Heart’s harder rocking cuts.

So, what hits did Sacred Heart spawn? While the album did not spawn anything on the level of the popularity of “Rainbow in the Dark, “Holy Diver,” “We Rock,” or “The Last in Line,” it did give audiences its share of hit Dio cuts. Opener “King of Rock and Roll” is fantastic straightforward rock, complete with fake audience for a laughable dramatic effect. The title cut is one of this fan’s personal favorite songs on the album; it is the perfect mix of heavier guitar-driven and more melodic, keyboard-driven sounds. “Rock and Roll Children” was arguably the biggest hit on the record, largely as a result of its hit MTV video. Claude Schnell really gets a chance to show off his keyboard prowess throughout the duration of this track, but it remains a rocker at heart. Upbeat and more poppy than much of the album, yet still a hard rocker, “Hungry for Heaven” is another classic; it could be argued that this was the album’s attempt at a hit single that would recapture the feel of “Rainbow in the Dark.” Similarly, “Like the Beat of a Heart” feels like something of a rehash of “Straight Through the Heart” from Holy Diver, albeit slightly more keyboard intensive, but these things do not mean it is not a good song in its own right. With at least half of the album comprised of hits, minor and major alike, die-hard Dio fans know that this album is not a dud by any means.

The lesser known songs are arguably more impressive than the hits, for the most part. “Another Lie” is straight up rock of the best kind, with hard rock riffs and catchy hooks alike. We get more hard rock on the equally memorable “Just Another Day.” “Fallen Angels” is arguably Vivian Campbell’s most impressive guitar playing on the record, and because of that, it is likely this fan’s favorite cut on the record. “Shoot Shoot” (NOT a cover of the UFO song) closes out the album; it is one of the more poppy and cheesy songs the release has to offer, and while the record could have been closed out in finer form, it is certainly not a bad song. 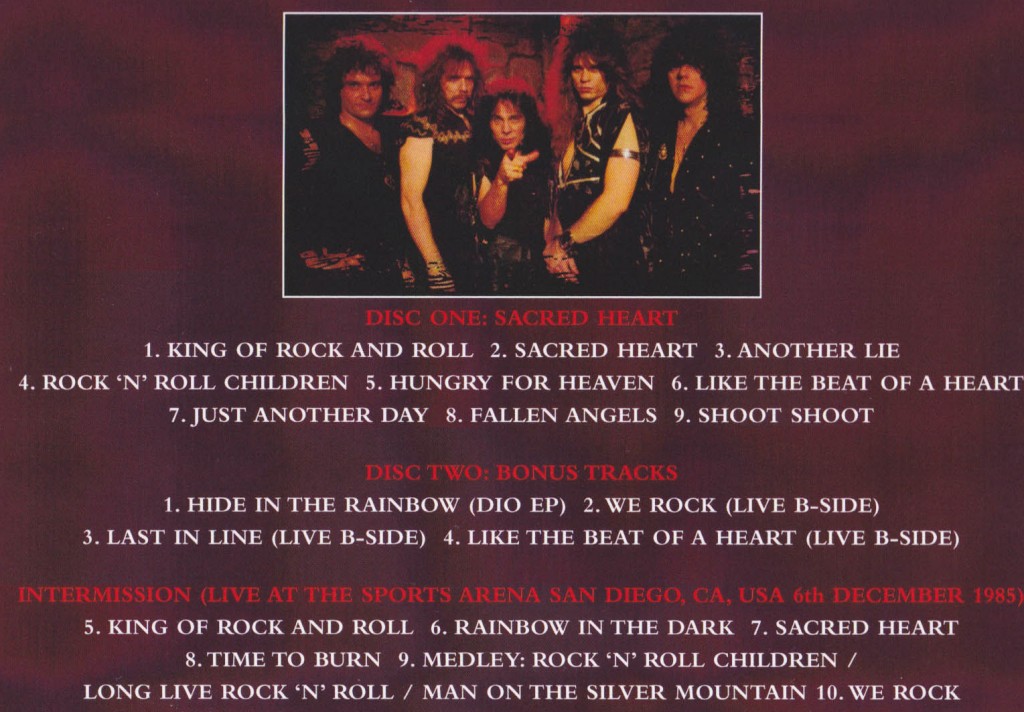 Tracklist for the Deluxe Edition. Disc one is the original album, disc two is comprised of bonus tracks.

Like the two albums that came before, this one got the Deluxe Edition treatment. Disc one is the complete original Sacred Heart album, while the second disc contains a wide variety of bonus cuts. The bonus cuts include live tracks that were used as single B-Sides, the rare song “Hide in the Rainbow” which appeared on the Iron Eagle soundtrack, and the complete Intermission EP, featuring a live performance from the band and a lone studio track as well. Many of these tracks are quite rare and have not had a widespread CD release of any kind, making this edition an essential purchase for any Dio fan.

Sacred Heart deserves more credit than it gets. Is it as good as the two albums that came before? No, but that is only because almost nothing is. It is a little more commercial, melodic, and keyboard driven than the records that came before. So what? Those things do not make this a weak Dio record. It was Vivian Campbell’s swansong with Ronnie and company, and he gives one of the best guitar performances of his career. This is a great, underrated record, and one that deserves a second look. Highly recommended, and the Deluxe Edition is an essential purchase for Dio die-hards, complete with rare cuts galore.