As the frontman for Electric Light Orchestra (ELO), Jeff Lynne has one of the most iconic and recognizable voices in the music industry. Even when ELO ceased to be in the mid 1980s, Lynne remained busy as a member of the Traveling Wilburys, pursuing other projects, and producing other artists. Lynne attempted a comeback under the ELO name in 2001 in the form of the Zoom album, but the album and tour were largely (and wrongly) neglected.

Now, Lynne is giving it another shot.

Alone in the Universe is the latest effort from what is now being called Jeff Lynne’s ELO. According to the credits and articles, Lynne played “everything except the shaker and the tambourine.” Steve Jay is the other credited musician. Returning to and revisiting the ELO name after so long is certainly a daunting task, and a bold one as well, considering the sheer greatness of the classic band’s music in their heyday. How does Alone in the Universe hold up?

I admit, at first I was skeptical to Lynne using the ELO name, with this being him and no other original members of the band. After all, so many other artists were a part of the band’s classic period. To adopt the ELO name is to make a great promise to the fans and listeners.

Lynne has made good on that promise here.

It has been nearly 45 years since the first Electric Light Orchestra record came out, and the band’s classic heyday seems so very long ago. And yet, Lynne manages to recapture the classic sounds of a bygone era here, and bring a few other interesting twists into the mix as well. 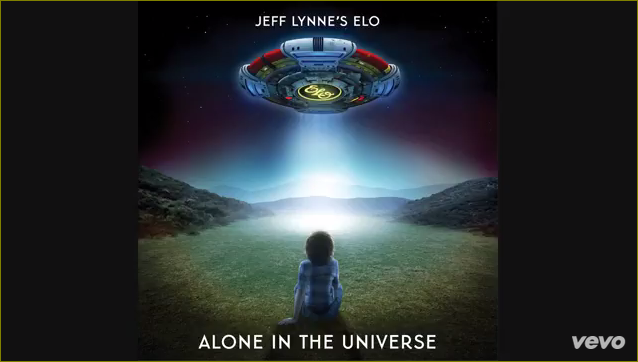 Jeff Lynne's ELO - Alone in the Universe. This marks the first album of original material under the ELO name since 2001's Zoom.

The diversity of this album is one of its strongest traits, yet it works well as a coherent whole as well. Lynne’s voice still sounds great throughout the record; it is hard to believe the man will be turning 68 years old this December! Clearly his voice has aged better than that of many of his contemporaries. The record features songs that sound like they would be at home on a classic ELO album, songs that have a more modern (but still uniquely ELO/Lynne) sound to them, upbeat songs that would not have been out of place on a Traveling Wilburys record, old school Roy Orbison-esque pop ballads, and even songs that recapture the loosely disco-influenced sounds of ELO’s classic 1979 record, Discovery. It is only 10 tracks long and fairly short, but for its duration, Mr. Lynne establishes that he is a lasting presence in the rock/pop world, and that he is nowhere near being done bringing his own innovations to the music world.

The end results speak for themselves. Jeff Lynne has resurrected the ELO name, giving fans something that combines classic and contemporary sounds in the best of ways. If you are a fan of ELO/Jeff Lynne, Alone in the Universe is an album that accomplishes everything it sets out to do and then some in its brief but brilliant duration. Highly recommended!