NOTE: This review specifically covers the Playstation 4 edition of the game.

It has been a decade since the last proper Star Wars Battlefront game. Do you feel old yet?

Growing up a Star Wars fan since first seeing the movies during a theatrical release in 1997 (I was 11 at the time), Star Wars video games were always a part of my childhood. And I saw it all, from the good (Rogue Leader) to the downright horrible (Masters of Teras Kasi). Of course, there were a select few Star Wars games that left a better impression than the others.

Star Wars Battlefront, when I first played it way back in 2005, was easily one of the best I had ever played. The sequel, Star Wars Battlefront II, capitalized on those same concepts and further enhanced the “on the frontlines” formula of the original. Both games were fantastic, though the entries for portable systems failed to live up to their consular big brothers.

For years and years, a new Star Wars Battlefront game was reportedly in development, but word of it disappeared, and with LucasFilm disbanding their video games division, any hope of a proper new game in this series seemed hopeless.

EA, one of the most respected video game developers on the market, has finally released a brand new Star Wars Battlefront game. And already it is the subject of both positive and negative reviews. How does this battlefield experience in a galaxy far far way actually fare? 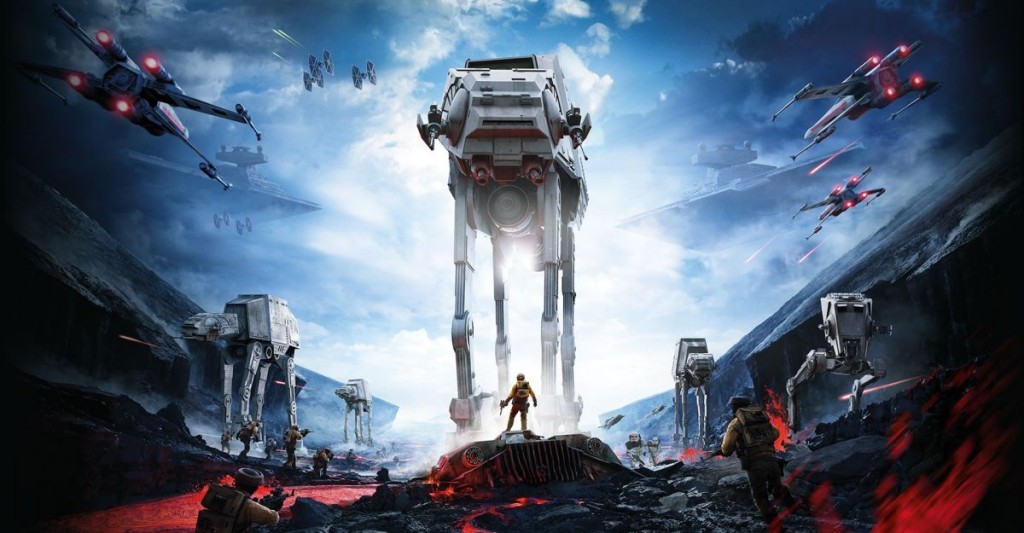 Star Wars Battlefront takes you straight to the deadliest and most chaotic battlefields of a galaxy far far away!

For the unfamiliar, Star Wars Battlefront games essentially put you on the front lines of a battle on one of various Star Wars planets, as a soldier right in the middle of a battle, as a Rebel fighting for against the Empire, or a Stormtrooper in the Galactic Empire, ridding the galaxy of the Rebellion. During battle, you employ a variety of weapons and items, gaining more from item pickups on the battlefield. There are any number of ways for the tide of battle to change, whether playing by yourself or with a friend from home, or doing an online multiplayer match with fans from across the world.

As far as the control scheme goes, it can be a bit daunting at first, but you quickly get used to it. The default controls for being a trooper out there on the battlefield work surprisingly well. Even land-based vehicles like the AT-ST handle quite easily with a little bit of practice. Controlling the aerial vehicles takes some getting used to, and this player did have some issues using the air vehicles in the terrestrial missions to attack ground units/targets; it was not as easy or intuitive a process as it was in the old game. That said, even though some aspects of the control scheme do require a period of adjustment, the game largely succeeds here. 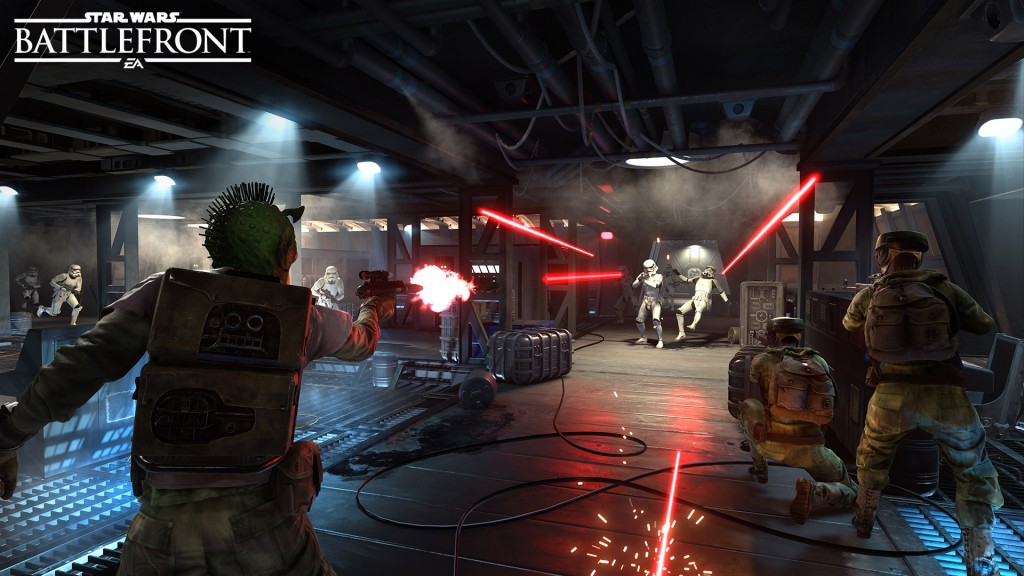 Travel across the Star Wars galaxy, taking both the Rebel and Imperial sides in epic battles.

By far the best thing about this game is its graphics. I have been playing video games since I was a child, and I can say, with all sincerity, this is the best looking video game I have ever played. Period. The graphics are absolutely beautiful, taking full advantage of the Playstation 4’s capabilities. The game does a beautiful job recapturing the “lived in” science fiction universe that George Lucas was striving to create back in the day. In terms of graphics and the look of the game, the Force is definitely with Star Wars Battlefront.

Sound and music are a mixed bag. The actual sound effects are taken straight from the movie and sound fantastic; any fan of the movies will discover this right away. Sadly, the voice acting is terrible and feels second rate all around. The game does use the classic John Williams score music, but there are some moments of replacement/filler music which stick out like a sore thumb, and detract from the overall experience. Put simply, the sound effects and the John Williams score sound great. The voice acting and replacement music, not so much.

One thing the game came under fire for upon release (and even prior to it) was the lack of a proper single player campaign mode, and the accusations that the game was almost exclusively focused around multiplayer gamers. The single player mode features a number of options, including vehicle based and surface based missions, as well as a survival mode where you fight off wave after wave of attackers, stranded alone behind enemy lines. While I admit I did enjoy playing these modes, I can see how someone buying the game just for single player could get bored fast with what is there.

The game only features locales/characters/battles/etc. from the Star Wars Classic Trilogy era, as opposed to the old Star Wars Battlefront games, which also featured planets and armies from the Star Wars Prequel Trilogy, including the Clone Army of the Republic and the Confederacy of Independent Systems’ Separatist Droid Army. This is disappointing, but it is possible that some of these elements could eventually be featured as paid DLC. 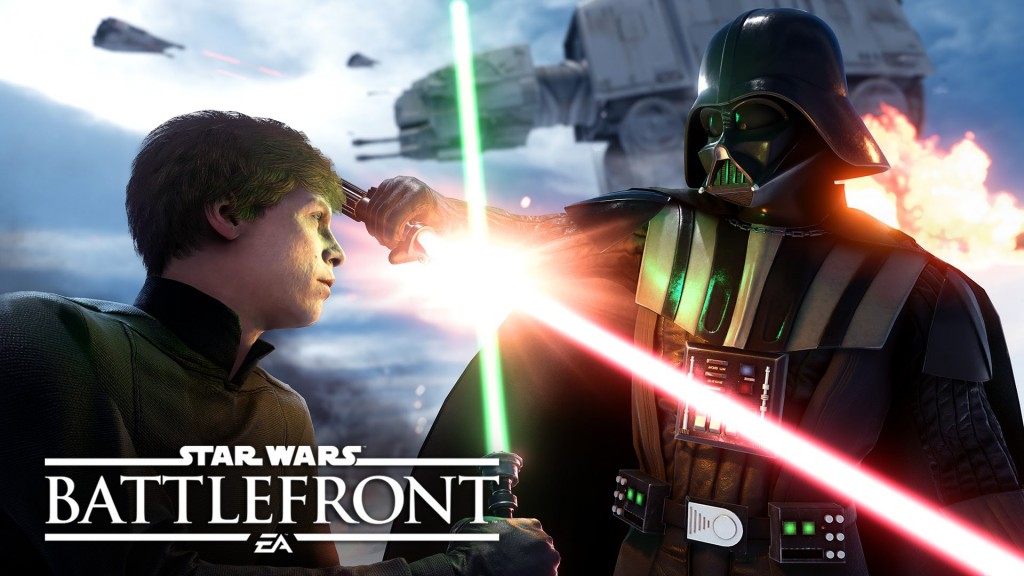 Hero/Villain characters make a welcomed return in the new game.

The content of the game itself is relatively limited right now, but DLC is on the way, which promises to expand the game with new characters, new worlds, and more. The season pass is $50, with a number of packages for DLC scheduled for release throughout 2016. The first DLC, “Battle of Jakku,” will be free to anyone who owns the game, and will be showcasing a planet from Star Wars Episode VII: The Force Awakens, the new film scheduled for release on December 18.

Like the majority of online-driven games on the Playstation 4, accessing the actual online gameplay here requires a Playstation Plus membership, which can be gotten for $50 for one year (there are less expensive, shorter term packages, but the annual one is the best value). The online play consists of a variety of modes, from aerial dogfights to variations on things like “capture the flag” and “king of the hill.” There is even a “walker assault” mode in which Rebels battle the Imperials’ AT-AT walkers, having to utilize uplinks and aerial bombings in an attempt to take out these towering monstrosities. Some of these modes, admittedly, do not differ that greatly, but when you are in the heat of battle recapturing the feel of the galaxy far far away, killing and getting killed on the battlefield, you probably will not care.

That said, if you are going to be playing online (and I would hope you are since that is the majority of that the game comprises) be warned – you are going to die. A lot. There are plenty of very skilled players that will show you no mercy; expect to get killed more often than you do the killing. As you move up the ranks (which happens with points that you earn in every online match) you will gain credits that you can use to buy new support items and blaster weapons; balancing and putting these tools to use in the best of ways can enable you to stand a better chance against your opponents. There are a number of unlockables here, and while the number of levels and playable hero characters is fairly limited for the time being, the future promise of more DLC promises to remedy that.

If you are planning on playing online with a Playstation Plus membership and have no issue shelling out the money for the season pass, I would recommend Star Wars Battlefront to any fan. Visually stunning, the game recaptures the feel of Star Wars like no other before. The single player experience is admittedly a little light, and the lack of a proper campaign mode is disappointing. But fans will love what is offered here despite the ultimately negligible shortcomings. All things considered, Star Wars Battlefront gets a firm recommendation from this fan.

All images in this review are the copyright of LucasFilm, EA, Disney, and all other associated entities.

Hate Eternal Come Back to Vegas: And ...

A Guide to Today's Music Styles