Home›Movie Reviews›Scorpions: Forever and a Day - A Look at the Past and Present of this Legendary German Band!

Scorpions: Forever and a Day - A Look at the Past and Present of this Legendary German Band!

The Scorpions have been around for 50 years. That is not a misprint.

It was in the late 70s and early 80s, upon getting an international record deal, that the band became a worldwide phenomenon. Hits like “Rock You Like a Hurricane,” “The Zoo,” “Big City Nights,” “No One Like You,” and “Still Loving You” are still revered as classics in the eyes of many a hard rock and heavy metal fan. These German rockers are still going strong, with a fanbase all around the globe.

A few years back, the band made the controversial announcement that they would be retiring from world tours and officially calling it a day (yep, they went there too). But prior to the “retirement” would be one big final world tour, as the band’s statement to the world, going out on top. 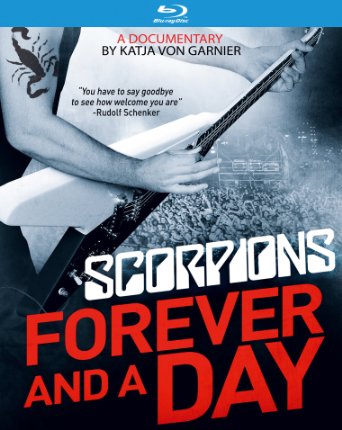 Scorpions - Forever and a Day is a documentary chronicling the history of the band, and their (supposedly) final tour.

Forever and a Day is a look at both the Scorpions’ farewell tour and world travels, and their history as a band after five decades, through the use of archival footage combined with newly filmed concert and interview content. New and classic concert content alike is utilized, with various personnel interviewed, including band members past and present, crew members, rock journalists, politicians, fellow musicians, and more.

As one of the biggest Scorps fans you will ever meet, I am a fan who was very curious to view this documentary; there is a disappointing lack of video content and docs on the band, so hearing about an official, band-sanctioned one was a breath of fresh air.

So how does it measure up?

I liked Forever and a Day, but I wanted to love it.

The biggest problem with this documentary is that the filmmakers could not decide if they wanted to make this the “History of the Scorpions” documentary, or a doc on their farewell tour. The end result is that it feels like an uneven compromise on both ends, haphazardly jumping from the “history” angle to the “farewell” one.

Look at Iron Maiden. They filmed a tour documentary a few years ago, and recorded a "History of Iron Maiden" documentary so big and expansive, it had to be broken into three parts. The Scorpions have an even bigger and longer history, and they tried to do it and a "farewell tour" doc in one 105 minute movie.

The filmmakers should have followed Maiden's example.

Of the two extremes, the “Farewell Tour” one seems to fare better, due in no small part to the beautifully shot HD footage of the band in action, and their numerous stops around the world to appease their legions of fans. Yet even then, something is still lacking. We do get an interesting look at things and what went into planning this tour, but at the end of the day, you still will find yourself wanting more, both on and off the stage with the band.

The “history” angle fares much worse. There are very interesting stories told by the band here, but the info and footage is all over the place. Michael Schenker (who was only a full time member on one album and a part time member of sorts on another) is interviewed numerous times, yet Uli Jon Roth (who recorded four entire studio albums with the band and one live effort) is barely in the doc at all, and hardly mentioned? Entire long stretches of the band’s history are neglected; too much feels neglected outright. History of past band members would have been nice as well; even a few spoken words could have given some further insight.

It is also worth mentioning that a very good portion of the doc is subtitled in English and features German audio; this was a German made doc and many of the personnel here speak German primarily. Not a good or bad thing really, but worth mentioning for people that hate reading subtitles.

That said, the documentary is not a total loss, and fans are going to love seeing this rare and new footage, and learning about the band. I only wish this would have been two separate documentaries and not a single “slapped together” one.

Picture quality on this Blu-ray Disc, particularly the new HD concert and Internet footage, is superb. There are a few issues with oversaturation and brightness on the concert stage, but this is to be expected with any concert disc. Older footage is in surprisingly good shape, but is of varying quality due to so many sources being utilized. Audio fares well, as a hard rock/metal focused doc should.

Bonus features are sparse; we only get a trailer for the film and about 10 minutes of bonus footage with two members of the band being interviewed on TV back in the mid 1980s.

Forever and a Day is a disappointment, yet I still feel that fans will be taking something away from watching it despite its shortcomings. This doc gets a moderate recommendation for the die-hard fans.

Glenn Hughes: The Autobiography - The True ...