The Beatles Anthology - The Definitive Documentary on the Fab Four!

Over the years, there had been numerous attempts to tell the story of The Beatles, arguably the greatest rock/pop band of all time. In fact, attempts to create a documentary on the band’s history go as far back as the latter days of the band! For years, it seemed like none of these projects would ever come to fruition or get a public release.

In 1995, fans of the band finally got what they had been waiting for all along. The Beatles Anthology was the long awaited story of the band; a documentary told in multiple parts, with the members of the group telling their stories, along with various members of the band’s crew.

The documentary originally aired in 1995 on the ABC network across multiple nights. It was eventually released to home video as an eight VHS tape set, featuring additional content that was not contained on the television airings (each of the eight segments runs roughly 70 minutes). The documentary series later was release on DVD as a five disc set (with each disc containing two of the VHS tape segments, plus a bonus disc of additional material). In addition to the documentary itself, a hardbound book was released, as well as three two-disc sets, containing rare demos, live tracks, outtakes, and even some newly “finished” demos recorded by John Lennon prior to his passing. 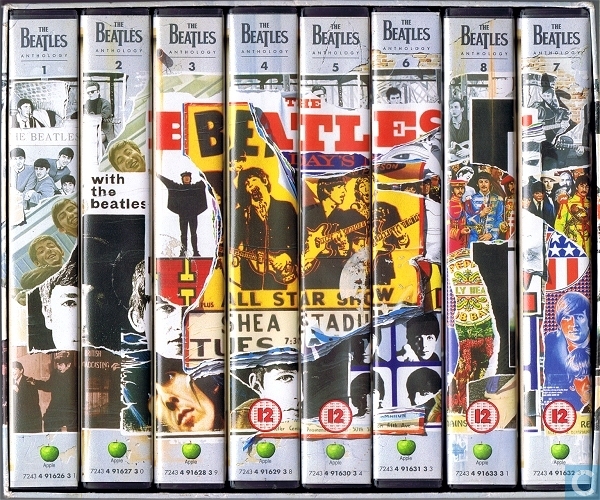 The first home video release of The Beatles Anthology was an eight VHS tape set.

The Beatles Anthology documentary is, put in the simplest terms possible, a career-spanning feature, beginning with the band members’ respective childhoods and musical discoveries, right up through the band’s disbandment in 1970. Surviving members Paul McCartney, Ringo Starr, and George Harrison (this was filmed prior to his death in 2001) are interviewed, as well as many individuals who were close to the band and a part of their inner affairs, including Neil Aspinall, George Martin, and Derek Taylor. John Lennon appears in archival footage, as does the band’s late manager, Brian Epstein. The documentary combines newly filmed interviews coupled with rare photos and archival footage. There is no narrator nor is there new interview content with the band members’ wives (though they appear in some of the old footage), the band and associates tell the story themselves, their own way.

There have been some rumors as to the authenticity of everything that is said in this doc (such as members of the band being unable to agree on certain things) but at large, this is the definitive portrait of all things Beatles. It is comprehensive on nearly every major event that took place in the band’s history, and goes back in time a substantial distance. Nearly every era gets the emphasis it deserves, and the combination of newly filmed interviews and rare archival content helps to cement its place as the most ideal of all Beatles documentaries and presentations.

The Beatles Anthology was released on DVD in a five-disc set, combining the segments from the VHS release with a new bonus disc.

Fans will find countless highlights amongst the treasure trove of stories and footage featured here. For instance, the first segment of the doc focuses on the band’s early years touring Germany, prior to Ringo Starr joining the band! There are the obvious stories behind filming their films and recording their albums, but also some less obvious and talked about stories, including a brief period where the band had to use a touring drummer when Starr took ill, tales of the band’s performances in Japan and the Philippines, the aftermath of John Lennon’s infamous “bigger than Jesus” remark, the formation of the Apple company, as well as the passions and stories of the individual band members in the bigger picture. And this is just a sampling of some of the stories explored here.

The documentary is not perfect, but the flaws are so negligible that fans are not going to mind. It is unclear at this point if the set will ever get a Blu-ray Disc review (much of the material contained herein was shot on video tape and would only gain a minor picture upgrade, though the lossless audio would be nice) but in the meantime the DVD set is absolutely worth picking up for any fan.

The Hateful Eight - Should You Go ...