2015 is the first year of Marvel’s new Star Wars comics, with countless mini-series being released, though the primary focal point has been the two main series, Star Wars and Darth Vader. Marvel has definitely decided to go all in and end their first year with the Star Wars license with a bang, in the form of Vader Down.

Vader Down is a six-part crossover event between the Star Wars comic series and the Darth Vader series, following the events of the first two arcs in each respective comic (placing this comic’s time frame after both of those first two arcs in each series, but still prior to The Empire Strikes Back). Darth Vader, with the help of his associate Dr. Aphra, has discovered that his son Luke Skywalker is with a Rebel Alliance refueling outpost of the desolate world of Vrogas Vas. Vader sets out to capture his son for his own ambitions, only to find himself crashed and stranded on this strange, barren world. When the Rebels catch wind of the fact that the fearsome Darth Vader is stranded, they send their best troops out to destroy the Dark Lord of the Sith. Unfortunately for the Rebels, Vader is not a force to be taken lightly. Dr. Aphra sets out for Vrogas Vas with her assassin droids to capture Skywalker, but it is not long before an additional presence arrives on the world, with sights set on destroying Vader as well. 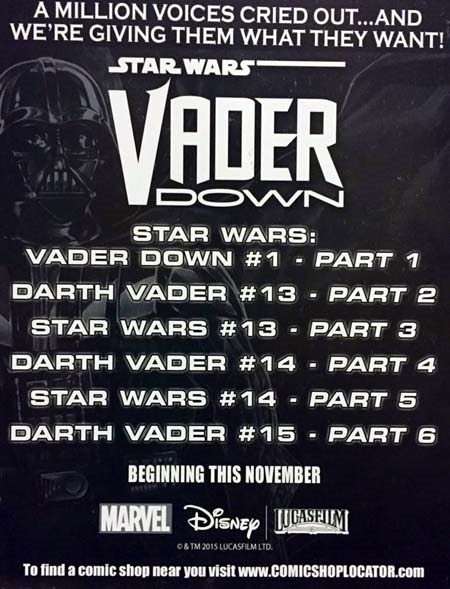 The Vader Down crossover comprises the comics listed above.

By the time the Vader Down crossover has ended, admittedly the status quo on the good and evil sides of the conflict has not changed much; obviously these characters have to survive due to their being including in The Empire Strikes Back and Return of the Jedi. But if you are a Star Wars fan, you are not going to care in the least. Why is that, you ask?

Because Vader Down is a whole lot of fun.

After two long and satisfying arcs on both the Star Wars and Darth Vader ends of things, it all comes together here brilliantly, putting many of the major players in one locale, in which all hell breaks loose. The action to be had in this comic is a Star Wars fan’s dream come true. The battles are epic, with casualties on both sides of the conflict, be it by air, by space, or by land. It is great to see all of these characters and story arcs come together. In many regards, Vader Down is over the top and outright ridiculous; Dr. Aphra’s pair of assassin droids continues to see their share of action and the best humor in all of the Star Wars comics. We even get to see Darth Vader duke it out with a half Mon Calamari, half machine foe with delusions of replacing Vader as the Emperor’s right hand man. As Vader Down seeks to reinforce how much of a bad-ass everyone’s favorite Dark Lord of the Sith is, you probably have a pretty good idea how that fight ends.

The artwork is solid throughout; both comics keep their respective crews for the crossover. If I had one issue with the otherwise amazing artwork, it was that some of the “good guys” looks a little “off” in the Darth Vader comics, though this is hardly a major flaw overall. The best art comes in the first volume, namely the opening space battle that ends with Luke and Vader stranded in the wilds of Vrogas Vas.

Admittedly, this crossover is a little light on the character development, but it does reinforce what we know about these classic characters, and their depictions are absolutely true to what we saw in the movies. One of the biggest problems with the (no longer canon) former Expanded Universe is the writers either “got” the characters, or they did not. So far the Star Wars and Darth Vader crew is on a roll; these are well-written and accurate personalities for the characters in question.

After a year of solid Star Wars comics, Marvel ends their first year with the license back in style with this superb crossover, packed with action, drama, humor, and all of the other things we have come to love about Star Wars over four decades. For fans of the franchise and/or Marvel’s comic books, this is a no-brainer, though you may want to wait for the trade paperback release on April 19, which will combine all six volumes.

Obi-Wan and Anakin - First Volume in ...

Journey Unlimited Brings the House Down at ...