As Black Sabbath continues their farewell tour, this rock and roll fan thought it would be a fine time to look back at the end of an era; the final two Black Sabbath studio albums that were recorded by the classic Ozzy Osbourne, Bill Ward, Geezer Butler, and Tony Iommi lineup.

The first six Black Sabbath albums are the ones you here about all the time, since each one contained multiple classic songs. Black Sabbath, Paranoid, Master of Reality, Vol. 4, Sabbath Bloody Sabbath, and Sabotage were all undisputed classics that are beloved by heavy metal fans all the world round. But Black Sabbath’s classic lineup recorded eight albums, not six. What of the other two?

Technical Ecstasy (1976) and Never Say Die! (1978) were the last full length studio albums recorded by Black Sabbath’s most legendary incarnation. Yet you almost never hear anything from these releases aside from the very occasional track here and there. Unlike the other albums, these two tend to be maligned and looked upon unfavorably, although they do have their supporters.

It was this era of the band that saw them getting less support from manager Don Arden; he was more interested in trying to help Electric Light Orchestra make it in America at the time. Ozzy Osbourne even quit the band in between the two releases and was temporary replaced by Savoy Brown’s Dave Walker (footage of Walker singing the song that would eventually became “Junior’s Eyes” can be found on online video sites). It was in the aftermath of the latter album that Osbourne was finally fired from Sabbath. In the years since, the band has reunited for a few one-off shows and did a live Reunion album with two new studio tracks circa 1997. But Ward has not participated on the band’s recent tours or 13 studio album.

But now for the important question: Are these albums any good? Do they deserve a place in your collection alongside the other earlier Osbourne Sabbath records? 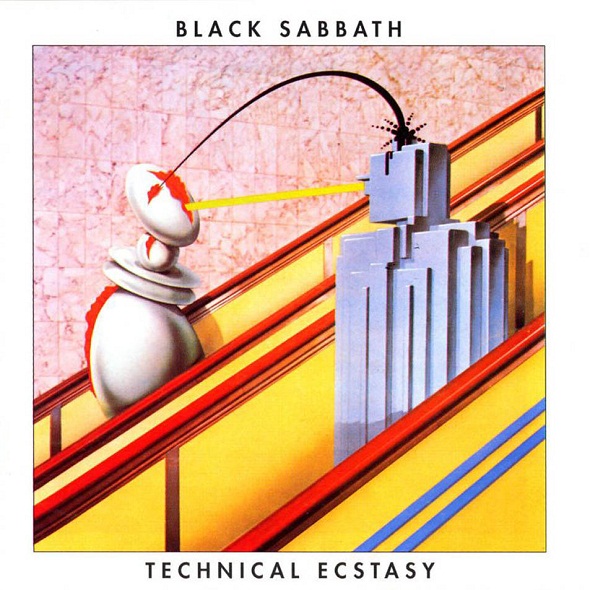 Technical Ecstasy was released in 1976. It is Black Sabbath's second album, and penultimate studio effort from the classic lineup.

Right from the very bizarre cover art with robots on an escalator, one will see that this could be a very different Black Sabbath album. Band members have admitted that this was an attempt at a more mature and, well, technical sound. The band did branch out a little here, and despite a lot of the hate, it is still a Black Sabbath record at heart, with more hits than misses. Not in the same league as the band’s earlier efforts, but definitely one that deserves a second look.

The good outweighs the bad here, contrary to what you have heard. Songs like “Back Street Kids” and “Rock and Roll Doctor” are undeniably juvenile, but still catchy Sabbath that rocks hard. “You Won’t Change Me” is one of the attempts at a more mature song (I would not quite call it a “ballad") and it fares surprisingly well; Tony Iommi still gets in some great moments here. One of the more unusual tracks on the album is “It’s Alright,” where drummer Bill Ward tries his hand at lead vocals! A melodic pop song of sorts, this one could have been a hit had it been recorded by any band but Black Sabbath; as such it remains one of the “black sheep” in their catalogue, but is a surprisingly good song if you can forget who is doing it. “Gypsy” is a great rocker that features fantastic work from every member of the band, even managing to incorporating a few progressive elements into its five minute duration. “All Moving Parts (Stand Still)” is undeniable classic Sabbath that would have been right at home on one of their earlier records, yet does still show the progression the band was undergoing at the time. The real surprise on this album is the mature, melodic and gloomy “She’s Gone.” This is a far superior ballad the overrated “Changes.” With orchestral arrangements and mature themes dealing with loss and suffering, this almost feels like an early version of “Revelation (Mother Earth)” from Ozzy’s solo career. It may be heresy to call “She’s Gone” one of my favorite Black Sabbath songs, but I do not give a damn – it is! Closing the record is “Dirty Women,” which is a little too long, but Tony Iommi again takes center stage and serves up some of his best riffage, making it a solid closer.

Overall, Technical Ecstasy is not a record likely to top anyone’s “Favorite Black Sabbath Record” list, but it deserves a second look from any fan. This IS a Black Sabbath album through and through, even if some of the more experimental moments were met with a mixed reception. Of the records being looked at here, this is easily the better and more consistent of the two. 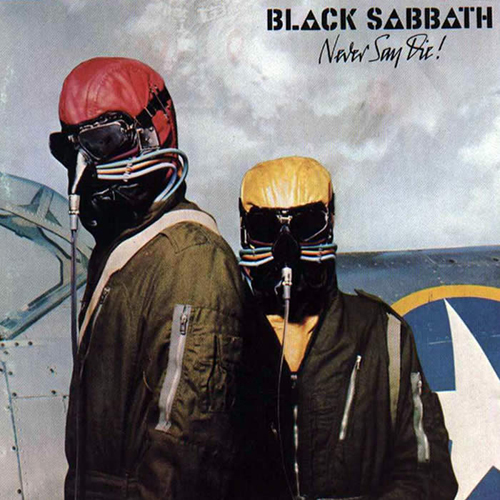 ...and here is where everything came crashing to a halt, and Black Sabbath’s first era ended. Technical Ecstasy saw the band recording some slightly experimental material, but Never Say Die! takes those notions in far different directions. By this point, it was clear that the band was running out of ideas, and willing to experiment musically in an attempt to finish the album and stay afloat musically. The end result was disastrous, though it did give us a handful of classics. Personally, I prefer Technical Ecstasy over this one; it was the more focused and consistent effort. But Sabbath’s biggest fans will still want this one for the sake of a few diamonds in the rough. It is interesting to note than on tour dates for this record, the band was constantly upstaged and outdone by their opening act, a then-unknown up-and-coming band called Van Halen.

This is Black Sabbath’s most inconsistent album of the classic period, but it at least manages to have its share of highlights throughout, so the album is not without merit. The title cut kicks off the album, and it is a straightforward rocker that serves as one of the true standout tracks on the record; no weird musical experiments or anything here. “Junior’s Eyes” (actually a reworking of a track the band wrote during the short-lived Dave Walker period) is a great song, featuring some of Osbourne’s best vocal work and lyrics alike, and do I even need to tell you that Tony Iommi is on fire? Much of the album may be hit and miss, but this just might be all-time favorite Ozzy Sabbath song.

Unfortunately, the album simply cannot keep the hot streak of those two tracks going. “Johnny Blade” has some interesting ideas and wild keyboard work, but wears out its welcome with a six minute plus duration. “A Hard Road” is a solid enough rocker, but reeks of a band desperate for commercial appeal, and again lasts far too long; the shorter “Shock Wave,” while not a bad song, fares similarly. “Air Dance” feels like an attempt at the more mature sound, but in its eerily melodic and progressive interlude, it just stops feeling like Black Sabbath, and will leave fans tilting their head in confusion. “Over to You” provides a welcome return to classic hard rock and is one of the surprises on the record. The bizarre, horn-laden instrumental “Breakout” (which again feels like it belongs on another band’s album) segues into closing cut “Swinging the Chain.” “Chain” is sung by Bill Ward, and is a surprisingly strong finisher that hearkens back to the blues driven hard rock sound of the band’s debut.

Never Say Die! is certainly not without its highlights. But this album falls far behind all seven albums that came prior, mostly because its songs A) tend to be overlong and wear out their welcome, and B) do not feel like Black Sabbath. 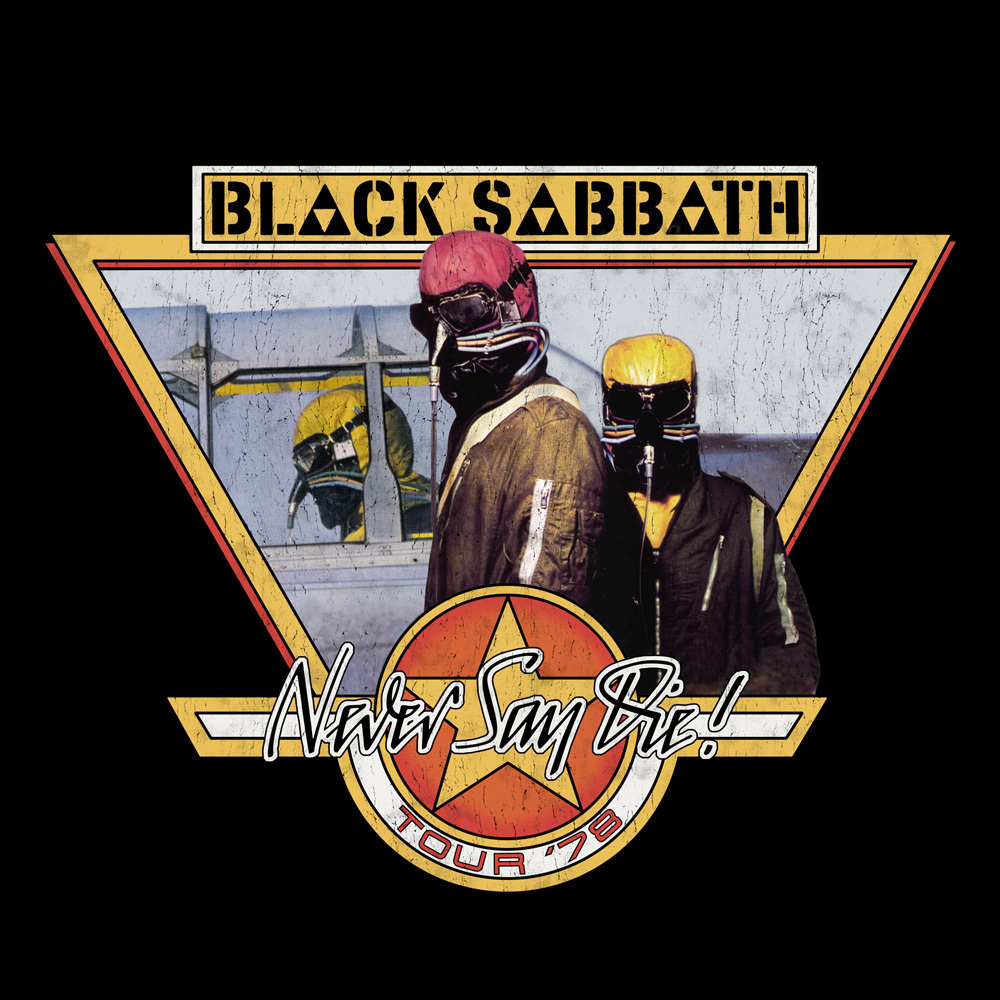 T-shirt graphic from Sabbath's 1978 tour, in promotion of the eight and final record from the classic lineup.

It is interesting to revisit these oft-forgotten Black Sabbath albums and see how they stack up compared to their better known predecessors. Technical Ecstasy has some of Sabbath’s most underrated work, even if it does not quite stack up to the albums that came before. Never Say Die! has its share of highlights, but is by far the classic lineup’s most sloppy and inconsistent album, going in some really strange directions. If you are a die-hard Black Sabbath fan, though, you will find reason enough to have both in your collection.