Normally, due to my schedule, I tend to miss out on opening acts at Vamp'd shows. This time, I figured I'd come a bit early and at least catch one of the two openers. Long Gone Day was a decent one. I caught their last five songs, the second of which was a Tom Petty cover, "I Need to Know," which they did justice to. Aside from that tune, they reminded me of a cross between Helmet and Offspring, both in look and sound.

The last time I saw Eric Martin was on Mr. Big's Bump Ahead tour, a date in Hollywood. As he's always been one of my favorite soulful hard rock lead vocalists, I was certainly looking forward to it, as he's not played in Vegas often in the 20 years I've been a resident; the lone exception being an acoustic gig last November opening for Ratt. His backing band has changed numerous times over the years; tonight's players were Chaz Butcher on bass,  Las Vegas' Jeff Tortora (Blue Man Group) on drums, and Howie Simon on lead guitar.

Starting off the proceedings with "Daddy, Brother, Lover, Little Boy (The Electric Drill Song)" (played a tad slower than the studio version, but kick-ass nonetheless) off of their breakthrough album, Lean Into It, set the tone for the night. "Alive and Kickin'" and "Voodoo Kiss" followed in short order. As I'd never seen Martin perform with musicians other than his Mr. Big compatriots, I wasn't sure how much material was going to be performed that most were unfamiliar with. "Superfantastic" off of 2000's Get Over It release featured Eric on acoustic guitar. Although there was a slight technical difficulty as his guitar had died, they soldiered on like champs after it was replaced. 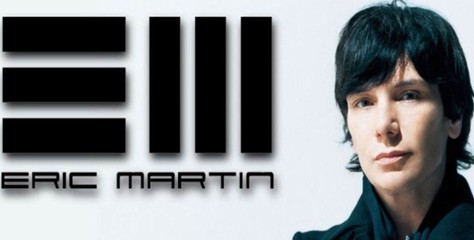 As the vocalist of Mr. Big and a successful solo artist, Eric Martin continues to entertain audiences around the globe.

As much a fan I've been of Eric, I have to admit that I haven't kept up with all of his output over the years, especially before he joined Mr. Big and the large volume of material while they were on hiatus for about ten years right after the turn of the millennium. Mr. Martin, who belies his years with his still youthful looks, has certainly kept busy. A far as I could tell, I believe that there were a few songs played off of TMG 1, which was a project called Tak Matsumoto Group formed in 2004. It was a nice smattering that added flavor to the night and also showed that he was an artist in his own right that didn't need to only rely on material written by/recorded by the group he's most closely associated with. Vince Neil, are you paying attention? LOL

Other songs performed included Bump Ahead's cover of "Wild World" (which Eric explained was a record company suggestion to capitalize on the momentum of that one ballad Mr. Big is best known for featured on Lean Into it) and "Promise Her the Moon,"  Hey Man's "Goin' Where the Wind Blows" (which was autobiographical for Eric) and "Take Cover," and What If's "Undertow." Each one proved that all three other members were of the utmost caliber on their respective instruments, which should come as no surprise.

Four songs from the last (of the nice 17 song set), "the campfire song" as Eric called it, "To Be With You," was executed. I can imagine that most of the crowd there, and the show was pretty nice as far as attendance size, was anxiously awaiting it. Certainly the female contingent, I'll bet.

As I'd spied the setlist from my vantage point, I was elated to see that "Take a Walk," a hard hitting deep track on Mr. Big's debut was to end the night. However, this wasn't meant to be as "Temperamental" (which wasn't on the list) was swapped out for it after the monster hit ballad ended.

If there were any disappointments, it would be that Mr. Big's debut was totally ignored, as were any songs from the The Eric Martin Band's 1983 LP. However, that's minor, and they did play "Untouchable," featured on his solo album I'm Goin' Sane.

It should go without saying, if you missed this concert, you missed out BIG TIME.

Beggars and Thieves - A Look Back ...