Home›Features›Beggars and Thieves - A Look Back at this Underrated Band's 1990 Debut!

Beggars and Thieves - A Look Back at this Underrated Band's 1990 Debut!

When the music trends of the world changed in the early 1990s, there were countless bands that never got a fair shake – Beggars and Thieves is a prime example. Initially comprised of former Modern Design members Louie Merlino on vocals and Ron Mancuso on guitar, bassist Phil Soussan (formerly of Ozzy Osbourne’s band and co-writer of the hit “Shot in the Dark”) and drummer Bobby Borg, the group released their debut album in 1990. This lineup did not last long, and on subsequent albums, Merlino and Mancuso would be the band’s only consistent members. A later lineup included former Billy Squier drummer Bobby Chouinard, who passed away in 1997; albums after the first would see Mancuso handling both guitar and bass duties.

The music on the Beggars and Thieves debut was spectacular; the group had a more mature sound than many of their contemporaries; with so many bands obsessed with sleazy, degenerate looks, sounds, and subject matters to their music, Beggars and Thieves would have been a welcome addition to the rock and roll world. They have drawn comparisons to group like Badlands, though Beggars and Thieves had a more melodic/AOR sound, something that helped them to stand out in the minds of those who have listened to them over the years. This is most certainly not a band that should have been “swept under the rug” as a result of record company politics; they definitely had a lot of unique elements they brought to the table. In fact, despite a lack of mainstream support, the group would continue to release sporadic albums over the years; they actually put one out as recently as 2011! Sadly, it is not clear or certain if there will ever be another Beggars and Thieves record.

Beggars and Thieves released several albums over the years, starting with their debut in 1990.

Countless songs that should have been rock anthems make their appearance on Beggars and Thieves’ 1990 debut; anyone who gives this album a chance will be surprised by how well it holds up today. The first album from the band absolutely stands the test of time, and it is a shame to see this is a band that does not get more recognition. The title track was a minor hit, with a music video produced, but unfortunately the remainder of the material remains undiscovered and unappreciated. Someone seeking an album of quality melodic, mature hard rock will enjoy what they find here. If you want to bang your head or you crave sleazy rock and mindless screaming, go listen to one of the other countless bands that can entertain you there.

For its 11-track duration, the Beggars and Thieves debut serves up several fantastic tracks. The opening cut, “No More Broken Dreams,” even features an extended instrumental, anthematic intro that helps to pave the way for the rest of the album, making for the ideal introduction. Ranging from bluesy, melodic rock driven tracks to slower cuts that beautifully show off just how diverse the band is, there are plenty of highlights to be experienced here, including rockers like “Billy Knows Better,” “Let’s Get Lost,” and “Heaven and Hell” (not a cover of the Black Sabbath song). Of course, the title cut which closes out the album, and spawned the aforementioned music video, remains arguably its most memorable track. Some songs on this album are stronger and more memorable than others, but there is not a single weak one here. 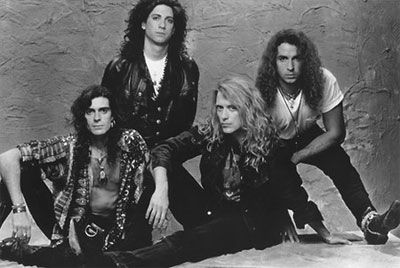 The band members themselves deserve some serious credit as well. Louie Merlino is an underrated but very talented rock vocalist, and it is no surprise to see that legendary songwriter Desmond Child utilized him over the years to perform backing vocals on recordings from countless artists, including Joan Jett, Cher, Bonnie Tyler, Alice Cooper, Michael Bolton, and countless others. Having had the pleasure of seeing him perform live over the years with a number of different bands (usually Vegas based), I can safely say this guy has still got it when he is on the live stage. Likewise, guitarist Ron Mancuso is an underrated talent as well; you are not likely to see this guy’s name pop up on “greatest guitarists” lists, but his abilities speak for themselves. While Soussan and Borg were not long lasting participants in the group, their contributions to the band’s first and arguably best record should not be overlooked either.

Beggars and Thieves' work, namely their 1990 self-titled debut, is worth revisiting if you are looking for melodic AOR style rock at its best. One of many records/bands that never got a fair shake despite great material at hand, this one is not to be overlooked or forgotten. It is sadly a difficult release to come by these days, but well worth hunting down. VERY HIGHLY RECOMMENDED!

Deadpool - This R-Rated Superhero Film is ...