Several years have passed since the events of the first Jaws film, and the island community of Amity has rebuilt its economy following those disasters and deaths. Unfortunately, the peace is short lived. During a diving expedition to the wreckage of the Orca (Quint’s boat from the first movie that the shark destroyed), two divers are attacked and killed. Not long thereafter, a water skier and boater suffer a similar fate. Some teens running along the waterside find a beached whale with large bite marks on the body. Chief Brody is convinced another shark has come to the waters of Amity, but has trouble convincing the townspeople that are blinded by a recovering economy to act. When a party of teens sets out on a sailing trip, including Brody’s sons, he must head out in an effort to bring them back to shore safely.

When a movie becomes a massive blockbuster, the natural thing to do is to crank out a sequel to generate additional money. Jaws 2 was the result of this phenomenon, but was met with a troubled production. The original director was fired, Roy Scheider repeatedly clashed with replacement director Jeannot Szwarc, and the mechanical sharks did not function properly. The filming of the summer-set film went much longer than expected, so late in fact that the young actors had to suck on ice cubes to prevent their breath from being seen on camera! Despite the difficulties, things did come together in the end and the movie was a commercial success. 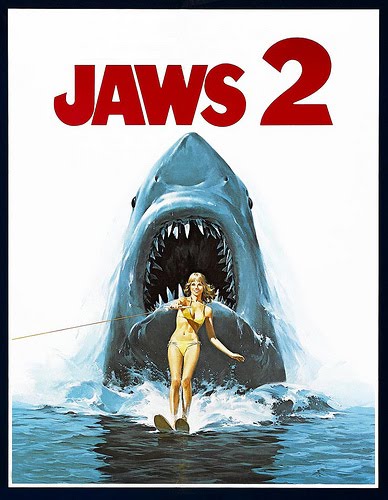 The Jaws sequels are seen by many as unnecessary and horrible. This is largely true; Jaws 3 had its moments and a few intriguing plot elements, but Jaws: The Revenge is largely filth devoid of any redeeming qualities. Jaws 2 tends to get lumped in with the other movies, but is actually a far better film. It is not the masterpiece that the original Jaws was; Robert Shaw and Richard Dreyfuss are both sorely missed. However, the good outweighs the bad and it comes off as a surprisingly good sequel. There are still plenty of scares and intriguing elements to keep the attention of any viewer.

The best thing about Jaws 2 is that it does manage to retain much of the cast from the original movie. Roy Scheider, Lorraine Gary, Murray Hamilton, and Jeffrey Kramer reprise their roles of Chief Brody, Ellen Brody, Mayor Vaughn, and Deputy Hendricks, respectively. All of these actors bring something to the film; none of them would return to the series after this aside from Gary, who appeared in Jaws: The Revenge. The majority of the cast, this time around, is comprised of the teens, for better or for worse. One noteworthy aspect of the movie in this regard is that it was the feature film debut of actor Keith Gordon, later famed for his role in movies like Christine and Back to School. 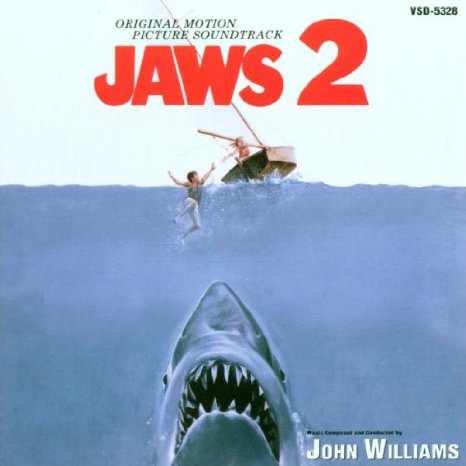 The movie does not simply mimic Steven Spielberg’s techniques from the first movie, which helps it to maintain its own identity while feeling like a proper continuation at the same time. For instance, the “slow burn” method is not used here; in the first film we did not actually see the shark proper until late in the film. Here we get a good look at it early on; the crew knew they would never be able to replicate those elements of the first movie, and rightfully decided not to go that route. Despite this, the crew manages to serve up some truly fearful and suspenseful moments. Like the first film, the movie used a mixture of mechanical sharks and live shark footage from Ron and Valerie Taylor, who contributed to the original movie as well.

Another major positive is John Williams returning to score the sequel. His score of the first movie was what helped to give the film a good deal of its identity. Here he largely reprises themes and motifs from the original film, yet does his own thing with some unique and new musical elements as well. Once again, his contribution stands as one of the best parts of the movie. In fact, people that speak unfavorably of the film otherwise tend to praise Williams’ scoring efforts.

The movie is not perfect, however. The biggest problem is the overemphasis on the teen characters; there are way too many of them, and they are largely one-dimensional, uninteresting stereotypes. With about one third as many teens and more development, it is likely audiences would have cared more. As such, they are largely “cannon fodder” for the shark. It also takes a while before the movie really gets underway, though things do improve in the film’s latter half.

Jaws 2 is flawed, and does not touch the original in terms of quality. But it is still far ahead of the subsequent Jaws sequels (which I likely will not be viewing again). For what it is worth, and what it does right though, Jaws 2 is still recommended viewing.

Universal released all of the Jaws sequels simultaneously to Blu-ray Disc in June of 2016; they had previously released a restored edition of the movie to BD in 2012. Jaws 2 (and the subsequent sequels) did not get the same full-on restoration that the original movie got, but for what it is, Jaws 2 looks very good in this transfer. The image is largely clear and detailed, and retains a film-like appearance, devoid of any signs of noise reduction of tampering. The audio holds up equally well, with voices, sound effects, and the John Williams score all coming across clearly and well. As far as a release of a vintage film goes, Universal has done an excellent job here.

There are no new bonus features, but most of them from the original DVD have been ported over, and each and every one of them is worth watching. A 45-minute “Making of Jaws 2” documentary is the most compelling, and is arguably more interesting than the film itself. Also included is a small assortment of deleted scenes that were cut from the movie largely for pacing reasons, vintage trailers, a flashback with actor Keith Gordon, production photos and storyboards, interviews with composer John Williams and director Jeannot Szwarc, the latter dealing with the film’s French title (which is actually rather humorous).

Not everyone is going to love Jaws 2; it does not top Steven Spielberg’s original film, nor does it bring a whole lot of new and original ideas to the table. But for what it is, it is an enjoyable sequel, and is far superior to the subsequent Jaws movies. Universal’s Blu-ray Disc features solid audio and video, and the bonus features are all worth checking out, even if they are recycled from the earlier DVD release. A highly recommended disc!

DISCLAIMER: All images in this review are the property of their respective copyright holders, including Universal Pictures. For promotional use only. All rights reserved.

Jim Crean - The Vocalist Returns With ...