With Geoff Tate parting ways with Queensryche and his separate version of the band being rebranded as Operation: Mindcrime, the expatriated vocalist has come back to make a return to the musical forefront. In a solo band that includes musicians such as Kelly Gray, Simon Wright, and Brian Tichy, many rock and metal fans have been curious as to what Tate is going to unleash on the world under his Operation: Mindcrime moniker. The new band, of course, is named for Queensryche’s classic 1988 concept album.

Tate’s proclamation of not just a new album but a TRILOGY of concept albums telling a continuous story definitely caught the attention of his fans. There have been a good many people out there bashing Tate’s decision to continue on with his own band, yet many of his longtime followers are eager and optimistic to see what they future holds. The Key, the first album in this trilogy, was released last year to mixed reviews, though none can deny that a few of the tracks on that record have the potential to become recognized as classics down the road.

Resurrection is the second album in this new “Tate Trilogy.” Operation: Mindcrime is off to a start that definitely has the attention of fans, and the first record in this set, which came out last year, was a competently made effort that, while it did not quite hold a candle to the Queensryche gems from the days of old, had its share of solid songs and showed us that the former ‘Ryche frontman still had a few tricks up his sleeve. 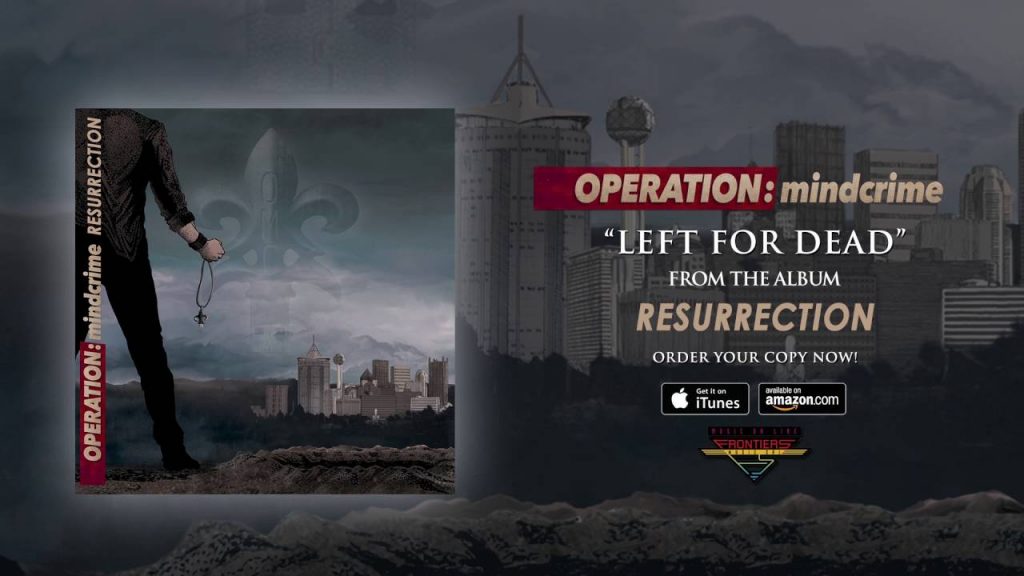 "Left for Dead" was released as an online single ahead of the album.

So how does Resurrection fare? Lightning does not exactly strike twice for Tate here. The album is competently made, with solid musicianship on the tracks; Tate’s band definitely features some of the best in the business. And while I admire Tate and company for branching out and trying something new, there is nothing particularly remarkable about it, either. There are actually some solid passages of melodic rock in the duration; the “intro tracks” near the beginning of the record have a deliciously retro feel to them, but are over too quickly.

At times the album takes on a more modern sound; I admire Tate for not simply mimicking the old Queensryche albums. The highlight of the new release is “Taking on the World,” which is the record’s hardest rocking and most straightforward track. As the album nears its conclusion, things get all the more bizarre and outlandish; the aptly-titled “A Smear Campaign” actually has saxophones present, and strange keyboards that feel totally out of place. This is one of those difficult albums to review because there are not many moments that are truly great or manage to stand out, but at the same time, it is not a terrible or poorly made one either. I have a feeling opinions are going to be all across the board for this one.

Resurrection is the second installment in the trilogy that Geoff Tate and Operation: Mindcrime started with The Key last year, and while it does not hit the highs that the first release of the trio did, there are still a few highlights here and there. It is neither the best release from Tate nor the worst; it is simply the middle of the road. You will want to give Resurrection a listen when it streets on September 23, but I cannot imagine someone coming back to it for heavy repeated listens, either.

The Beatles - Live at the Hollywood ...