Home›Reviews›Stryper and Todd Kerns - The Yellow and Black Attack Celebrates 30 Years of Their Biggest Record!

Stryper and Todd Kerns - The Yellow and Black Attack Celebrates 30 Years of Their Biggest Record!

It has been 30 years since Stryper released their best known studio album, To Hell with the Devil. Three decades later, the band is still alive and well, spreading their own brand of Christian hard rock. Fallen, the latest studio album from the Yellow and Black Attack, was released last year, showing the band’s musical prowess is still at a high. Michael Sweet, Robert Sweet, Oz Fox, and Timothy Gaines have set out on a tour to celebrate this seminal anniversary, performing the album in its entirety, plus other selections from throughout their career.

Vinyl has become one of my favorite venues in Las Vegas in recent years; the room is intimate and a great place to see a show, yet can still pack in legions of fans. It is the ideal locale in which to catch an evening of classic hard rock and heavy metal, as was further demonstrated by this Stryper gig!

Kicking off the evening of rock was an opening set from Todd Kerns, playing acoustic. Kerns is well known to Vegas audiences as a former member of the Sin City Sinners, though is more widely known on a global scale as the bassist and sometimes vocalist in Slash’s backing band. His brief set featured a handful of songs from his previous albums, including a few that were further popularized in his Sin City Sinners days, much to the delight of the audience. With a great voice and plenty of interesting tales of his past, Kerns is a man who never fails to please his spectators. The only weakness in this set was the brevity, but this is an expected obstacle when you are the support act. Fortunately, he has a number of solo dates as the headliner in the weeks to come.

Prior to Stryper taking the stage, the group showed a presentation on the venue’s video screens, detailing the history of the band and many of their past experiences. While this was a novel idea and revealed a lot of interesting info and vintage photographs and video, it did drag on longer than necessary. The spectators did not seem to mind, of course. 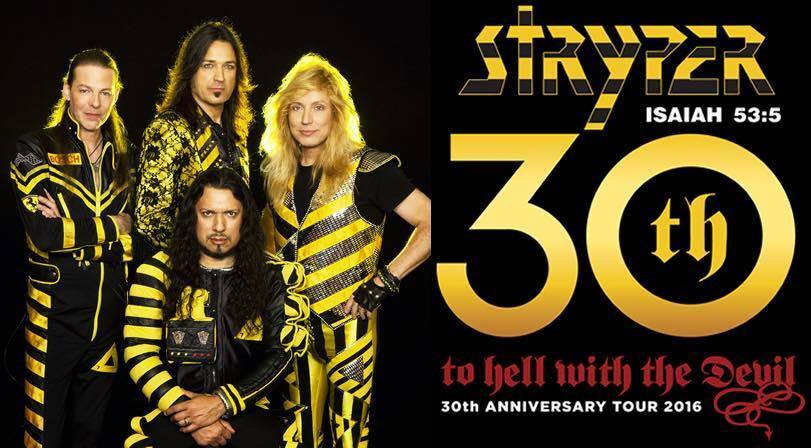 The group took the stage not long thereafter, complete with yellow and black outfits from their classic period, which actually fit them far better than I would have imagined! The opening set of the two featured the band playing he classic To Hell with the Devil album in its entirety, with the packed house at Vinyl clearly enthusiastic. Cuts like the title track, “The Way,” “Honestly,” “Calling On You” and “Free” were all done justice on the live stage.

The second set featured the band returning to stage wearing more traditional clothing (including Oz Fox in a shirt obviously too large for him, which became the butt of many jokes throughout the evening) and playing other songs, including cuts from their most recent studio efforts, and some rarer vintage material; it was good to see albums like Soldiers Under Command and Against the Law all got some emphasis. We even got a surprise cover of Van Halen’s “Ain’t Talkin’ ‘Bout Love!” The only two omissions that were disappointing to this fan were “Loud and Clear” from the band’s Yellow and Black Attack debut EP, and the title cut from 2013’s No More Hell to Pay, easily the band’s best song since their heyday. 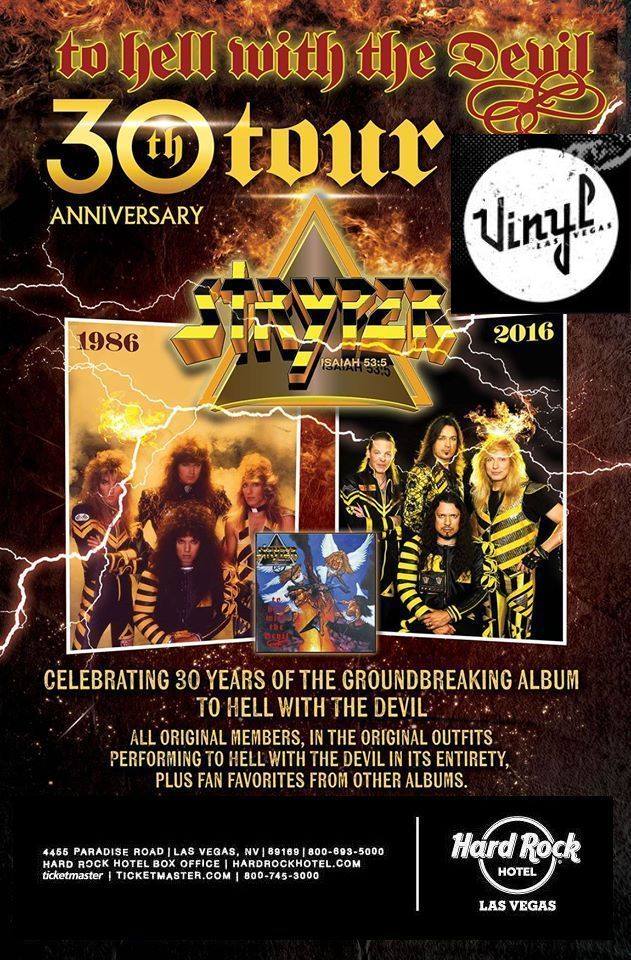 As far as the performance goes, there are not enough positive things that can be said about the group. Complete with those classic outfits for the first set, the whole band was on fire. We even got them tossing bibles out into the crowd, just like the old days! Stryper continues to improve as they go along over the years; they are one of the few bands that is as hard and heavy now as they were back in the day, if not more so, as their recent albums demonstrated.

If you could not already tell from this review, I love Stryper. And this was a fantastic performance that easily ranked amongst the best rock shows in Las Vegas in 2016. These guys are energetic and furious on the stage and hold nothing back. No fan in attendance was disappointed in the least with what they heard the band doing. If you are a Stryper follower and love the band’s music, be sure to catch them on their 30th anniversary tour for To Hell with the Devil!

The Phantom of the Opera - Looking ...