As the lead guitarist and co-lead vocalist in Triumph, Rik Emmett was long one of rock and roll’s greatest talents. Although he recorded a number of solo records after leaving Triumph, nothing else ever quite reached the same level of popularity that he achieved in that group in the late 70s through the mid 80s. That said, while he may not be in the mainstream or the spotlight like he once was, it has not stopped him from creating excellent music.

RES9 is an album from Rik Emmett and Resolution 9, a band that teams Emmett up with Dave Dunlop, Paul DeLong, and Steve Skingley. Guests on the new album include Emmett’s classic Triumph bandmates Mike Levine and Gil Moore, as well as Rush guitarist Alex Lifeson and Dream Theater vocalist James LaBrie.

At the end of 2016, I published a “Best of the Year” list detailing my pics for the best albums and concerts of the year. As RES9 was released relatively late in 2016, I unfortunately overlooked it and did not even learn about it until early 2017. After having missed it at the initial time of release, I have gone back and given it a listen. 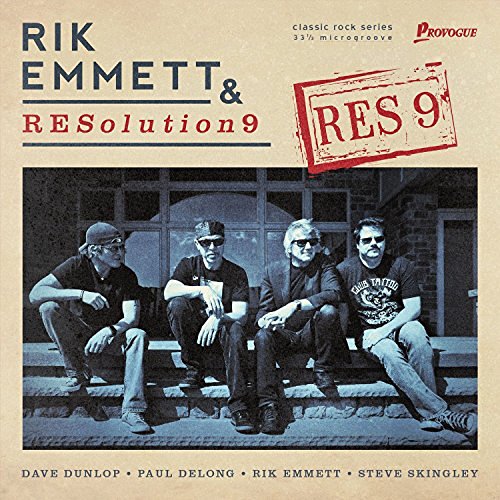 I definitely missed out by not hearing this when it came out, and if I had known about it earlier, there is a good bet it would have made my “Best of 2016” list.

Let me start by saying, and I cannot stress this enough, THIS IS NOT A TRIUMPH ALBUM. Even though it features that band’s main man as the star of sorts and he guests with his bandmates on one track on the release, those coming in wanting a new Triumph record are not going to get it here.

On the other hand, if you are open minded, you might find this to be a phenomenal release – I know I did!

There are bluesy, ZZ Top-esque rock tunes. Melodic rock ballads of sorts. Progressive material. Adult contemporary. And everything in between. One of my favorite things about RES9 is you never know what is going to be right around the corner. This is something well worth exploring for any fan of Rik Emmett, and every single track shows off just how diverse and talented an artist he is. It is likely different than what you would expect from the iconic Triumph guitarist/vocalist, but what is contained on this disc absolutely does not disappoint.

Rik Emmett is no has-been, and listing to RES9, with plenty of talented guests and collaborators will satisfy in more ways than one. Absolute highest recommendations for this release!

Kamelot - When I Reign Looks Back ...

Madame Mayhem Bursts Onto the Scene With ...