Home›Features›Celebrating 20 Years of Daria! A Look Back at the Classic MTV Series

Celebrating 20 Years of Daria! A Look Back at the Classic MTV Series

DISCLAIMER: This article may include minor spoilers for those who have not seen the show before.

In 1997, MTV unleashed Daria on an unsuspecting world. Spun off from Beavis and Butt-Head, the show was one of the final things of quality ever shown on MTV.

Daria Morgendorffer, voiced by Tracy Grandstaff, began life as a supporting character on Beavis and Butt-Head, first created as an intelligent female foil to everyone’s favorite brainless dumbasses. These made for some of the best moments on the show, including Daria offering the twosome advice on growing a plant for class, having to explain the concept of “graduation” to the boys (they apparently did not know that school eventually ends), snapping humiliating photos of them for the school paper, and even asking brutally honest questions to the President of the United States. 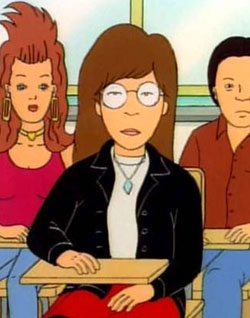 Daria on Beavis and Butt-Head. Her look and attire were changed for her spin-off.

Daria began airing on MTV in March of 1997, and the show ran on MTV for five seasons and two television movies, ending its run in early 2002. Reruns continued to air on the channel for years, and have also been seen on The N and Logo. Most recently, the show appeared on the newly launched MTV classic, but it has disappeared from the channel in more recent months. The show was released on DVD in 2010, eight years after its original run had ended, with legal issues regarding licensed music being cited as one of the reasons the release was held up for so long.

The basic plot of Daria begins with Daria and her family, comprised of bubbly, shallow fashion-obsessed sister Quinn, workaholic attorney mother Helen, and hyperactive, troubled consultant father Jake, all moving away from Highland to the new city of Lawndale. Upon arrival, the bubbly Quinn is immediately popular at school, becoming Vice President of the school’s Fashion Club, and gaining the attention of every boy in Lawndale High. The sarcastic, less social Daria is almost immediately an outcast, and is sentenced to a boring self-esteem class. While this seems like a bad experience for our young heroine, it ends up being a blessing in disguise, as she ends up meeting Jane Lane, an artist who is equally snarky, sarcastic, and fed up with the world. The two strike up a friendship and quickly become inseparable, in spite of their bleak outlook on, well, just about everything, with Daria visiting Jane, and the twosome indulging in Sick, Sad World, a ridiculous tabloid style television program, and visiting the local pizza restaurant. 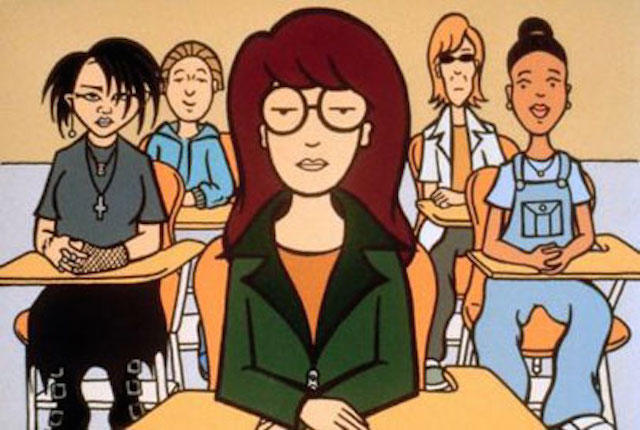 Daria in class! Her expression seldom changes, as viewers will quickly discover. Andrea is pictured at the far left; the other characters are non-speaking generic ones. 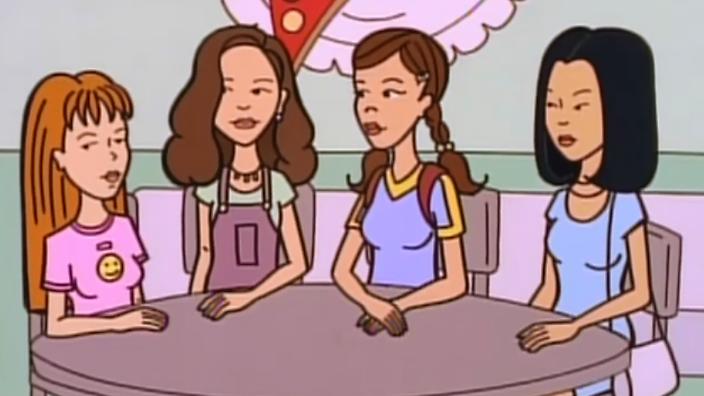 Other recurring characters on the show include Helen’s business partner Eric, with whom she has regular phone conversations, even in the middle of family dinners and when her daughters are in desperate need of advice, Jane’s brother Trent, who Daria has a not-so-secret crush on, and his struggling band, Mystik Spiral. A major change to the series comes in the form of romantic interest Tom Sloane, a prep school student who debuts in the third season finale. A number of tertiary characters make background appearances throughout the series but rarely play a major role, including extended family members of the main characters, the ultra-conservative Gupty family, UFO abductee Artie, and the morbidly obese hypoglycemic Mrs. Johanssen.

This was my first time going back and watching Daria in years, and just from those last three paragraphs, you can see just how daunting and large of a cast the show has (and this does not even cover all of the extended family members and one-off characters!) One of the greatest strengths of this show is the sheer diversity of its cast of characters, and how nearly everyone is utilized in a major role, typically on more than one occasion. Many of these personae evolve over the course of the series, and in many cases, they defy conventions and the stereotypes they represent. A great example of this is with Jodie and Mack, who initially may seem like “token” characters inserted to give the cast diversity, but they end up as some of the most intelligent and well-spoken cast members, with a number of the most interesting plotlines revolving around them. Any show can have a big cast, but Daria knows what it is doing, with so many of these persons juggled in effective, interesting plotlines. If you watch the series from start to finish, you will see the cast change over the show’s five-season run, from minor changes to full-blown transformations, with Daria’s sister Quinn being another great example, particularly in the later seasons. 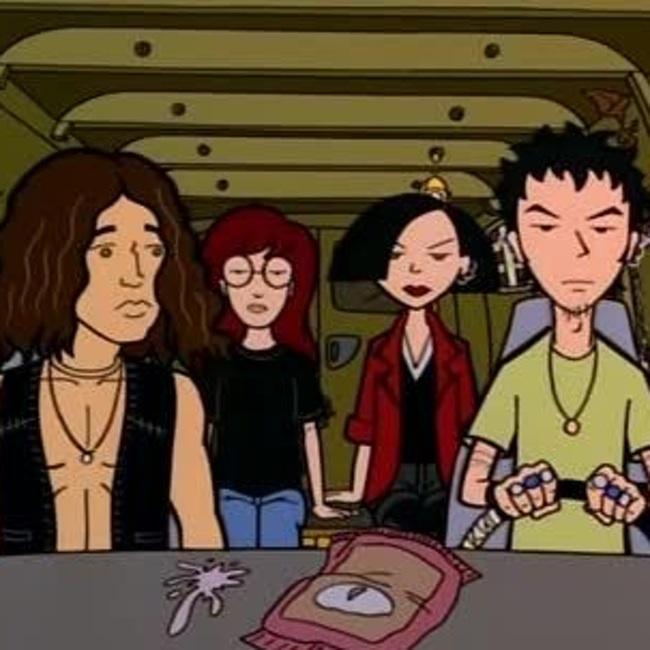 Of course, no review is complete without giving credit to the namesake character. Daria herself is one of the most memorable sitcom heroines of recent decades, animated or otherwise. She is a deep, developed character, yet has a witty quip or one-liner for literally ANY situation. Her emotional range may seem one dimensional due to her speaking style, but over time, Daria herself is a far more interesting character than meets the eye. She must contend with workaholic parents that barely acknowledge her, a sister who refuses to let people know the two of them are related, and in later seasons, romantic drama, not to mention the fact that everyone writes her off as “depressed” and “unpopular.” As you watch the seasons, you will not only laugh at Daria’s endless quips, but find yourself sympathizing with her, and following her growth and maturing as a character. When is the last time you could say THAT about someone from an animated sitcom?

While Daria was spun-off from Beavis and Butt-Head, the two shows are worlds apart. Beavis and Butt-Head was about two dimwitted teenagers oblivious to the sheer hypocrisy of the world that was dangled right in front of them. Daria, on the other hand, knows what a sick, sad world (joke most definitely intended) it is, and spares no expense at letting the viewer know this. Perhaps the greatest irony is that in the years since the show ended, MTV transformed itself into the very shallow and mindless things Daria hated and spoke out against.

The tone of the show is another one of its greatest strengths. At times the show seems downright silly and off the wall, but like the characters themselves, there is more depth than meets the eye here. Later seasons in particular take on a more dramatic tone, yet still for the most part manage to retain the show’s signature sense of humor. At times, starting in the third season, the creators released more surreal episodes, ranging from an episode with “Holiday Spirits” as characters, to a “Musical” episode! While critical reception to those episodes was mixed, it did show that the crew was not afraid to take risks, and many of them pay off. I personally was surprised by how edgy a few of the episodes were, particularly in the more “dramatic” years. The show is never “explicit,” but it does touch on some ground you would not expect to find in an animated sitcom of all things. Regardless of who you are, if you are alive and a part of the modern world, some element of this show will hit close to home for you. 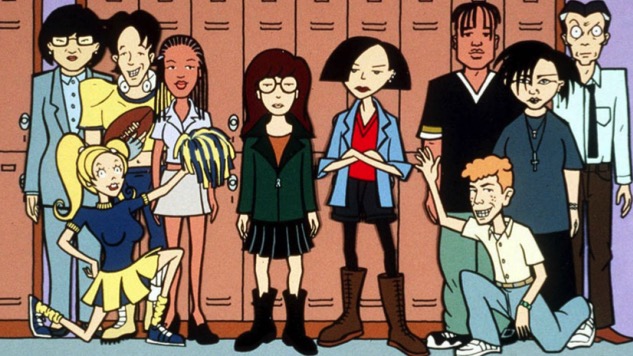 Much of the show's cast at Lawndale High. From left to right - Ms. Li, Brittany (on ground), Kevin, Jodie, Daria, Jane, Upchuck (on ground), Mack, Andrea, and Mr. DeMartino.

The show feels surprisingly undated and is still fresh and relevant, with the only real signs of datedness coming from the outdated technology used by the characters. They still have to go to a cyber café to use the Internet, cell phones are the older “brick” style, characters actually have and use beepers; etc. If this show was made today, you wouldn't be able to get the Fashion Club off their smart phones! But if you can overlook those minor signs of technological datedness, you will love what you see, and be just as engrossed as you were back in 1997, if you caught the show the first time around.

The show primarily used a veteran voice cast and veered away from “guest stars,” though this rule was bent in the first of the two movies, "Is It Fall Yet?," which featured one-off guest-voiced characters, including Dave Grohl as an egotistical artist, Bif Naked as a lesbian living in an art colony visited by Jane, and Carson Daly as a tutor. While I admire the show for staying away from using guest voices, these ones were surprisingly well done. Daly’s tutor character scores major points for being one of the few teenage males on the show to not become obsessed with Quinn, and in fact speaks his mind in a very blunt moment. Once again, it goes to show just how strong a cast and crew the series had. 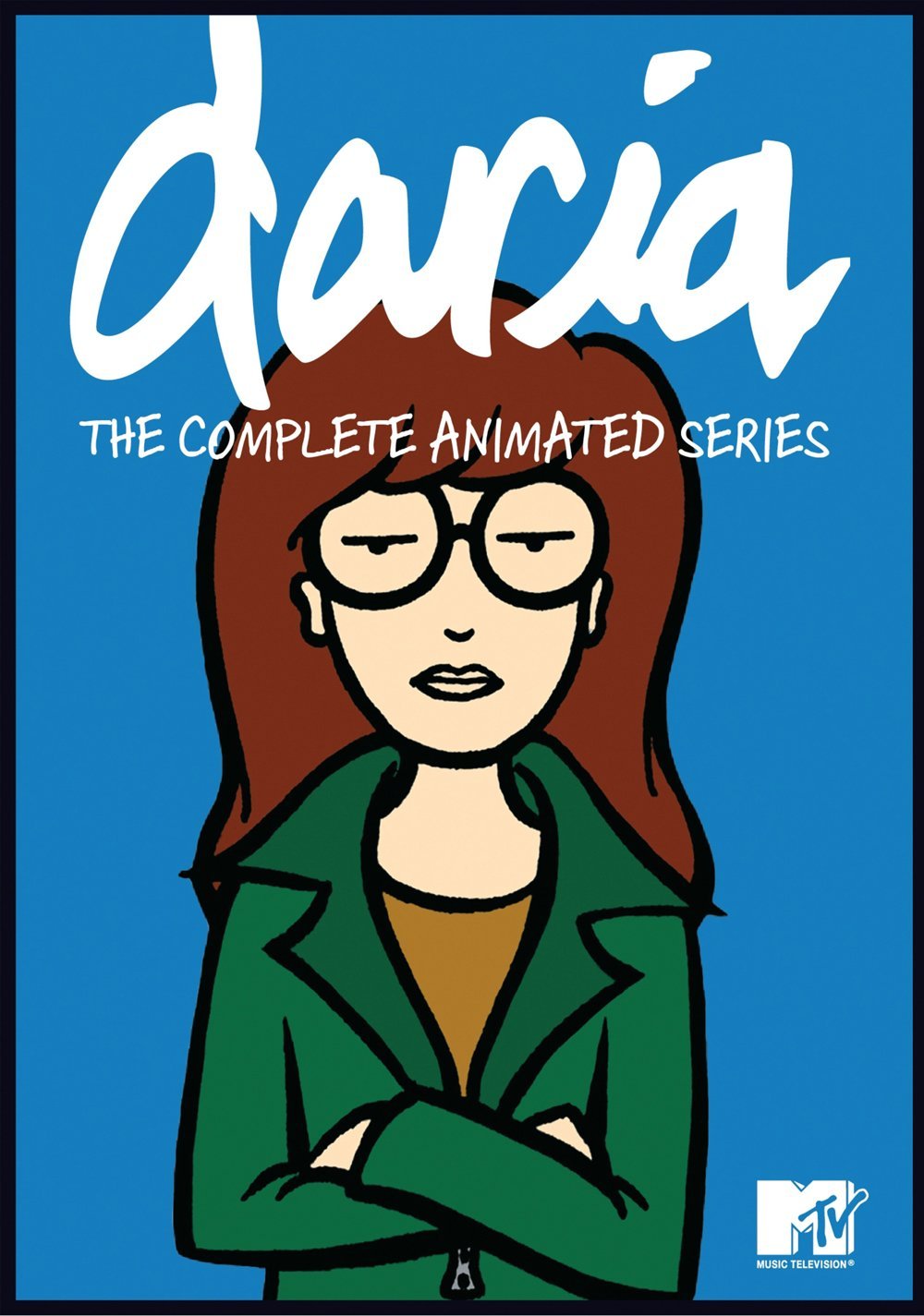 Daria was released on DVD in 2010, however the DVD release removes the licensed music the show used due to the stratospheric costs associated with retaining popular music for home video releases (although Splendora's theme music and the songs they did for the TV movies are intact). The “generic” music in its place actually tends to mimic the actual songs that were used on the show, so they at least handled it in a tasteful manner, and it rarely detracts from the experience. Audio and video quality show their limitations (this is a standard definition show from the 90s!) though the later seasons actually look quite good. Some bonus features are included on the DVD set, including interviews with cast and crew, and the “Daria Day” intros for episodes when they were shown in a marathon on MTV (not every episode has one of these). The set can be had for a relatively low price from online retailers, and it includes every episode and both movies, so it is a worthy investment. 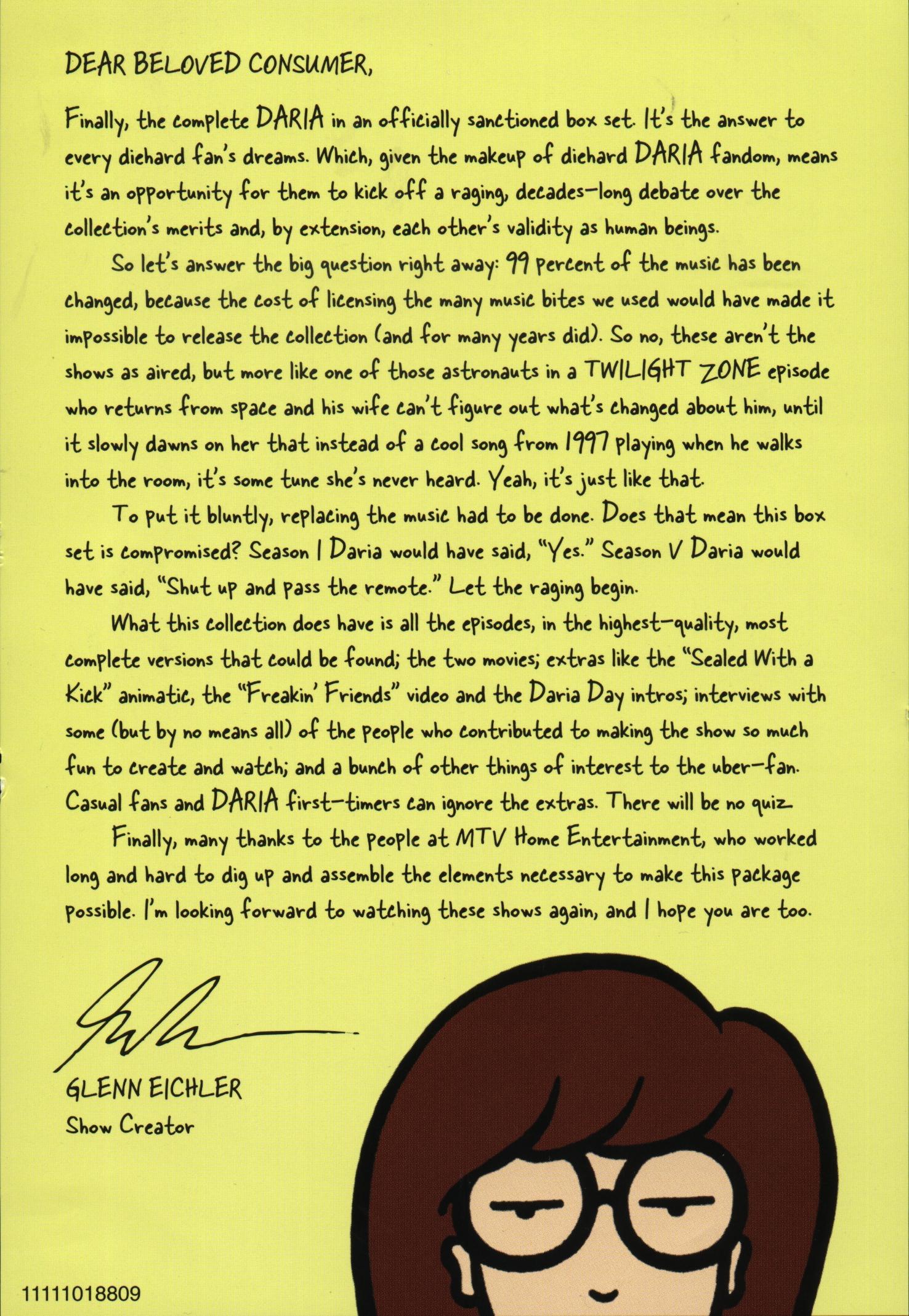 The "Disclaimer" letter included with the DVD, explaining the legalities/music changes/etc.

I am celebrating 20 years of Daria, and the show is just as enjoyable and fresh now as it was when it hit the airwaves in 1997. You’ll laugh, you’ll cry, and you’ll fall in love with the Misery Chick and the cast of characters all over again. Some elements, namely the technologies used on the show, show their age, but as a whole, Daria is well worth rediscovering, or discovering for the first time.