Last Flag Flying is directed by Richard Linklater, and is based on the Darryl Ponicsan novel of the same name. The film stars Bryan Cranston, Steve Carell, and Laurence Fishburne.

Larry “Doc” Shepherd, Sal Nealon, and Richard Mueller were three friends that served together in the military in Vietnam, and the trio is reunited when Doc’s son is killed serving his country in 2003 in the Middle East. Sal, now a bar owner and proprietor, and Mueller, now a preacher, join Doc on a trip to attend his son’s funeral. But as the men discover the circumstances regarding the death of Doc’s son, they come to question their own military roles over the years, including the wars of each generation, and their past actions.

Last Flag Flying is a flawed but still excellent comedy-drama film that beautifully juggles dramatic military themes and the struggles of personal loss with more than a few laugh-out-loud comedic moments courtesy of its brilliant trio of leading men. The movie keeps things low key and never descends into ridiculous, slapstick territory, which works to its benefit in more ways than one. 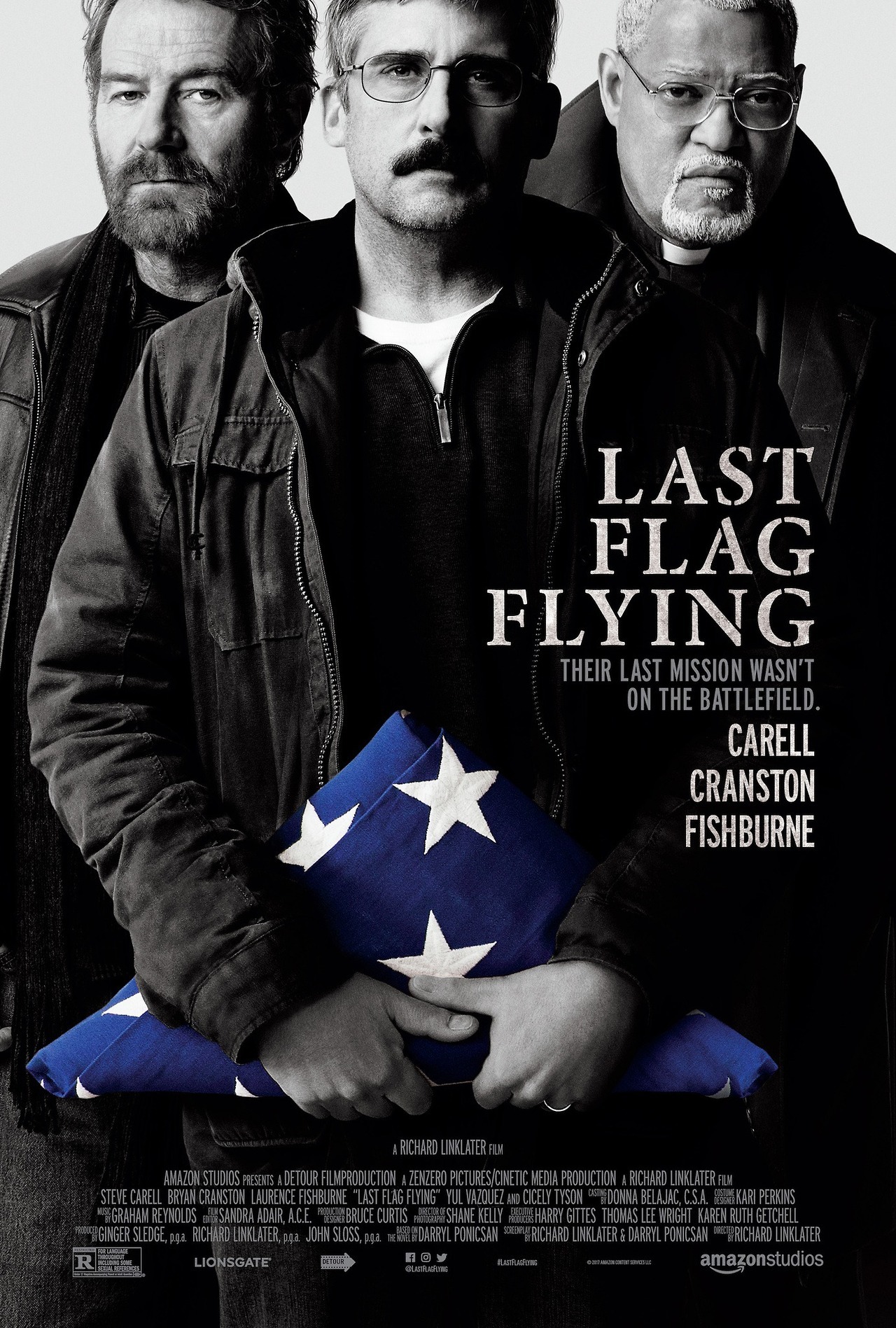 The casting of this film is its single greatest asset. We have Steve Carell as the former disgraced military man who took the fall for his friends and paid the price for it in the past, and now must struggle with the loss of his wife and child alike. Bryan Cranston as a raucous bar owner who is not afraid to speak his mind in any issue yet still maintains some semblance of military honor and loyalty. And last but not least, Laurence Fishburne as a man who has found God and become a preacher, but was once the most reckless and wild of the group. The chemistry between these actors is what makes the movie. Whether the other two men are consoling a distraught and uncertain Doc, or Sal is getting on Richard’s ass about the existence of God (or lack thereof), the scenes between these three actors steal the show.

The tone of the film is another strength working in its favor. This is a comedy-drama in the truest sense; there are scenes that will have you laughing out loud, and others that will make you sympathize with Doc’s plight, and that of his friends and their nature to question their roles over the years. Director Richard Linklater, who has past directorial credits ranging from Dazed and Confused to School of Rock, proves himself the right man to adapt Ponicsan’s novel. At no point does the film try to outdo itself with slapstick humor and cheap laughs; every moment of the movie is earned and feels authentic. The ending and overall theme of the film send a mixed message, but this moviegoer appreciated the ambiguity, and thought it suited the material well.

That said, the film is not perfect, and there are a few issues that keep it from perfection. The biggest issue with the film is the run time; running just over two hours, with a few too many subplots and side stories. A good 20 minutes of the movie could easily have been cut or trimmed down. There are also a few moments of tonal inconsistencies, where the movie sometimes becomes too dramatic or too funny, and can stay as such for several minutes on end. Fortunately, these moments are fairly rare.

Last Flag Flying is a fantastic comedy-drama that overcomes its fairly small flaws, largely due to its tone and ability to balance the dramatic and the comedic, through brilliant performances from the trio of leading men. The film is definitely worth checking out.

DISCLAIMER: All images in this review are the property of the respective copyright holders, including (but not limited to) Amazon Studios. For promotional use only. All rights reserved.