LBJ - A Well-Cast and Filmed but Disappointingly Conventional Biopic

LBJ is directed by Rob Reiner and stars Woody Harrelson, with supporting roles from Jennifer Jason Leigh, Bill Pullman, and Jeffrey Donovan. The film had premiered at the Toronto International Film Festival in September 2016, but did not get a proper American release until November 2017.

LBJ is the true story of Lyndon B. Johnson, whose lengthy political career takes him to the Vice Presidency under John F. Kennedy, and who finds himself the 36th President of the United States following Kennedy’s assassination. Over the years, Johnson must work to unite the Democratic Party, including the introduction of a Civil Rights Act, attempting to unite the nation in a time of rampant discrimination and civil unrest. 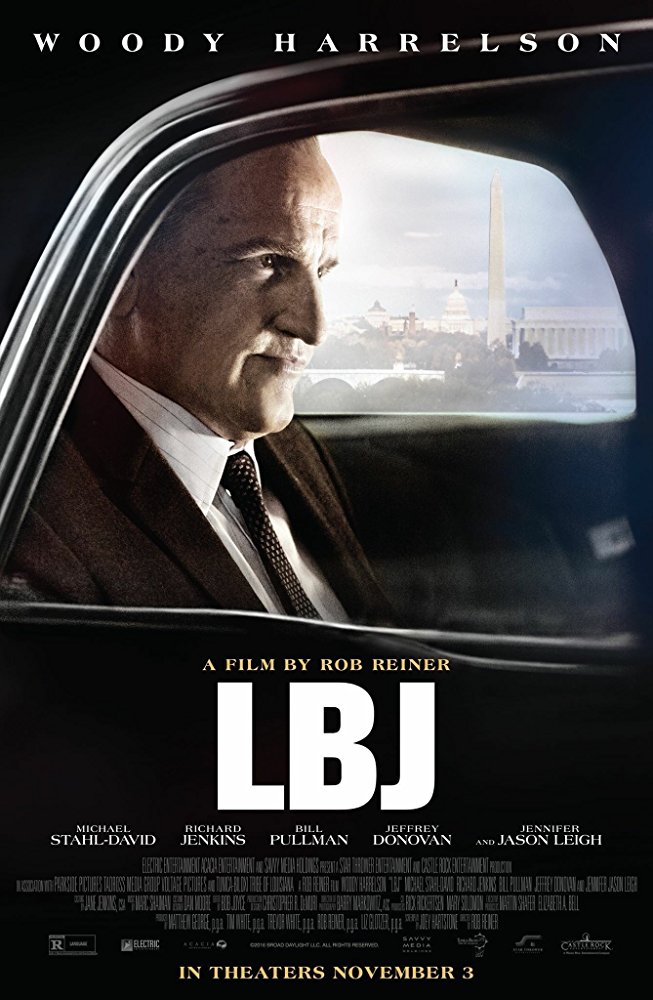 Rob Reiner is a superb film director; his past filmography includes classics like This is Spinal Tap, The Sure Thing, Stand By Me, The Princess Bride, Misery, and A Few Good Men (yes, all of these classic films are directed by the same man!) The man can direct anything from comedic satire to gripping drama, and the results are usually solid. LBJ is a film that had potential, including its brilliant casting of Woody Harrelson in the title role. But it suffers from a needlessly convoluted non-chronological narrative, and feels like an overly conventional biopic that fails to dive beneath the surface or give us anything surprising or startling. The fact that film ends just after Johnson takes the presidency further works to its detriment, although Harrelson still shines.

The film looks great, and Harrelson’s presence in the title role is the standout element. He is virtually unrecognizable, and the makeup effects work surprisingly well. There are some brilliant, dramatic moments, and even a few hilarious ones; in the hands of a lesser director and leading man, these moments would have suffered. This is Harrelson’s movie first and foremost, although Jennifer Jason Leigh does get a handful of decent moments as Mrs. Johnson. If nothing else, no one is miscast, and the movie definitely takes us back to the era in which it was set.

The problems with LBJ, however, prevent the film from rising to greatness. Throughout the first half of the movie, we jump back and forth from the four years leading up to Kennedy’s assassination and the event itself, which needlessly bogs the film down and confuses the viewer. Even with different cinematic styles and palettes between the eras, the transitions still feel jarring and unnecessary. The film also fails to cover any of LBJ’s actual presidency, ending following his Inaugural Address. In fact, Vietnam, one of the biggest issues that ultimately resulted in LBJ’s declining popularity, is only mentioned twice in the entire movie, and one of which is just in the worded epilogue! This feels like a “by the book” depiction of Johnson’s life, and the abridged version of that. How did Johnson first come to be in the political arena, seeing as how he had already clearly been there a while when this film begins? What happened during HIS presidency, and not just the times leading up to it?

LBJ is a beautifully shot film with a fantastic leading man in Harrelson, but it feels like the “Greatest Hits” version of this story. While the film certainly ends on a high note, it is not an entirely honest one, as it fails to depict the man’s declining popularity in later years, opting to represent that with a worded epilogue and nothing more, and presenting nothing of his early life. While there is a lot to enjoy here, it feels rushed in places, and focused on too narrow an era of the man’s life.

Rating: Two out of four stars (though I am tempted to bump the rating up half a star due to Harrelson's performance).

DISCLAIMER: All image in this review are the property of their respective copyright holders, including Castle Rock Entertainment. For promotional use only. All rights reserved.