Just Getting Started.... Never Quite Gets Started

Duke Diver is the manager of the Villa Capri seniors living complex, and is popular with everyone there. The women want to have private, intimate times with him, while the men look up to him for his athletic abilities and general charisma. But Duke has a secret – he is in the Witness Relocation Program for turning informant against a crime family. Things at Villa Capri are shaken up further with the arrival of Leo, who quickly becomes something of a rival to Duke, and begins drawing much of the attention away from the resident champ, much to his dismay. And further complications come in the form of a woman from corporate who comes to do an audit of the complex, who both Duke and Leo develop an attraction to. When Duke is seen in a commercial for Villa Capri by the family that wants him dead for his past activities, he and Leo must set aside their differences to deal with the killer.

Wow. With the star power in this film, and so much comedic potential, Just Getting Started should have been holiday comedy gold. Instead, it might just be the worst film of 2017. While Jones and Freeman play likable characters with hints of some comedic chemistry, the movie commits the cardinal sin no comedy should – it simply isn’t funny. The film was not screened for critics, which is usually not a good sign, but I would expect more from two of the biggest names in the entertainment industry, and a director who has had a few gems in the past. 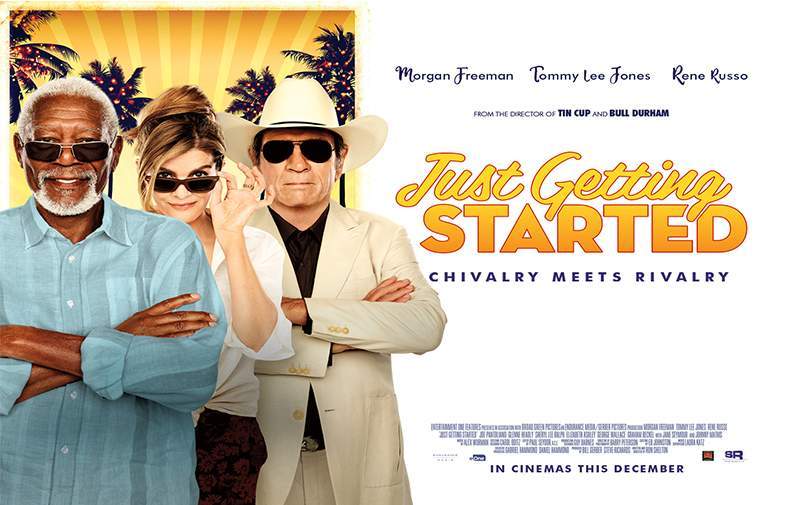 Tommy Lee Jones and Morgan Freeman are two of the most talented actors in Hollywood, and they have been able to make this claim for decades now. They have two of the most diverse filmographies of any actors out there, with some of their past movies including comedies. Hell, the two show hints of chemistry in this film a few times, but the sad and simple truth is that nothing here works. Even the best actors cannot rise above something poorly written, rushed, and undeveloped. It does not help that the characters played by the two leads are poorly-written, one-dimensional, and worst of all, forgettable.

The film clocks in at a brisk 90 minutes, but even this is too long for the tone the film takes. Lengthy stretches of the film have nothing happening other than day-to-day life at the Villa Capri. In other words, roughly half the time, the film is not even trying to be funny, but just gives us a “slice of life” feel. For a comedy that only has 90 minutes to amuse its audience, this doesn’t work. And when the film does attempt a gag, none of them land. And while do admit that the movie did get a few chuckles out of me here and there, I could probably count those moments with the fingers on one hand. The film is not only not funny; it is also boring. Senior citizens are featured prominently in the film as characters, and I get the feeling this is a movie that will likely only appeal to them, as well. Prior to this movie, I did reviews for a few other holiday comedies, which I dismissed and derided because they were basically collections of hit-and-miss gags, but at least with those movies, there were a few funny moments, and some of the gags occasionally worked.

Anyone in the movie other than Jones, Freeman, and Russo gets basically nothing to do, and is even more one dimensional. How can you put comedian George Wallace in your film, and relegate him to being Freeman’s character’s “suck up?” The same can be said of Joe Pantoliano, who has appeared in some fantastic films over the years, with roles including Guido the Killer Pimp in Risky Business, and Richie Valens’ manager in La Bamba. Here, he gets literally nothing to do. Everyone in the film, even the beautiful women attracted to Freeman and Jones, get nothing to do at all. Everyone, including the big-name stars, are simply bland here, through no fault of their own.

Furthermore, the tone of the movie shifts too much in its third act. A major problem of this film is that it had simply too much going on, and didn’t bother developing any of these elements. Is this a movie about Duke’s life at the Villa Capri? His past catching up with him? Leo trying to one-up him? A mob/mafia movie/parody? A holiday movie? Just Getting Started tries to be all of these things and more, and fails at everything. Furthermore, like nearly every comedy of recent memory, the movie attempts a non-actor “guest spot,” this time in the form of singer Johnny Mathis, but this adds nothing to the film and is quickly forgotten.

The characters’ behavior often makes no sense, and changes to suit what the scene requires rather than feeling like authentic development. Duke is in hiding from the mafia in Witness Relocation…. Yet he appears on national television in a commercial for the Villa Capri? Russo’s character is a by-the-book professional, yet starts flipping out like an immature child later in the movie? I won’t go through each of these instances, but you get the idea.

Another major flaw that works against the movie is the decision to set it at Christmas. This dates the film and makes it so people will generally only want to watch it around the holidays, even though the Christmas setting adds nothing to the movie aside from some minor dialogue and setpieces, and the film could easily have worked set at any other time of the year.

Okay, enough ranting on my part. Just Getting Started never, well, gets started. It does eventually end, but not soon enough. It is poorly written, trying to cram too much into one movie. The film does not attempt comedic gags and scenes often enough despite being marketed as a comedy, and none of the attempts stick or leave an impact on the viewer. The only saving grace of the film is the occasional moment of chemistry between Jones and Freeman, but these are too few and far between, and do not redeem the film. Do not waste your time with Just Getting Started, even after it gets a home release.