Unexpectedly Yours is directed by Cathy Garcia-Molina, starring Sharon Cuneta, Robin Padilla, Julia Barretto, and Joshua Garcia. The film is in the Filipino language, and subtitled in English for American theatrical exhibition.

Patty is a single mother who has just turned 50 years old. She maintains an on-again off-again relationship with the mother of her child despite having been cheated on many times, and remains at odds with her daughter much of the time. It is not long before her new neighbor, Cocoy, a man she was loosely acquainted with years earlier, begins making advances towards her, much to her initial dismay. But as she struggles with being left behind at work and with planning a high school reunion, she discovers that Cocoy and her may have more in common than initially expected. Meanwhile, Cocoy’s nephew Jason tries to woo Yanni, Patty’s beautiful young daughter, who is planning her own future out.

Unexpectedly Yours doesn’t exactly bring anything new into the world of romantic comedy-dramas, and parts of it certainly feel like they are going through the motions. But the film succeeds through the strong performances of its cast, in particular its two leads, who definitely bring life into the material. 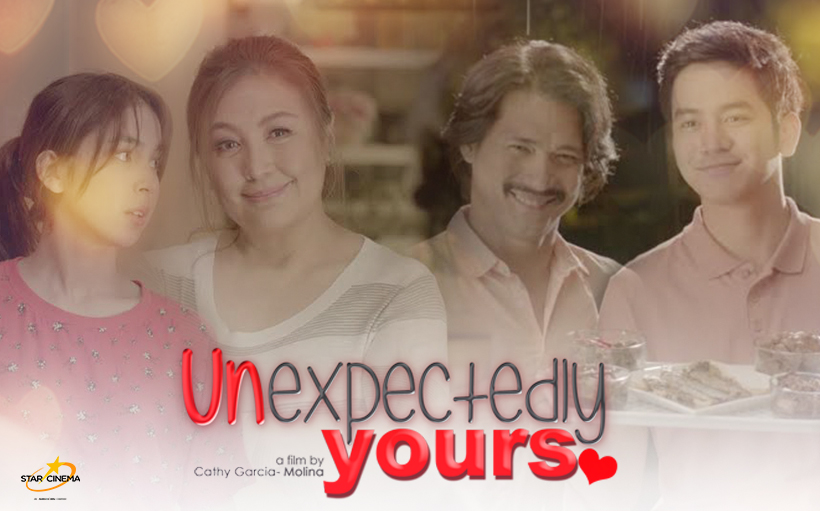 The performances of the lead actors are the best asset of the film. Sharon Cuneta is brilliant as Patty, a character that will resonate with audiences. She is going through a mid-life crisis of sorts, and feels stressed at work, at home, and everywhere else. She brings many things to the role, and her interactions, be it with her disloyal ex-husband or overbearing mother, all feel authentic and genuine.

Perhaps even more of a standout is Robin Padilla as Cocoy, who has just become Patty’s neighbor and is smitten with her. At first he seems like something of a shameless horndog, but as time progresses, it is obvious there may be more to him than meets the eye. He owns every scene he is in, and everything from the comedic to the dramatic works well. This guy is simply a delight to watch, no matter what a scene requires.

The film’s biggest weakness is that other elements tend to get overlooked and overshadowed, outside of the Cocoy/Patty romance. Julia Barretto as Yanni and Joshua Garcia are wasted in this film, relegated to what essentially constitutes the “B story” of the film. The chemistry between Garcia and his on-screen uncle played by Padilla is fantastic, and it is a shame that it tends to be underused later in the film.

The movie also does get a bit bogged down its third act, hitting the audience with an onslaught of melodrama on top of everything that had already been established and developed. At roughly two hours, the film is too long, although this is not a major flaw considering the time we get to spend with the characters.

Unexpectedly Yours is nothing new when it comes to the world of romantic comedy-drama, but it finds strength in its lead actors. Sure, there are some pacing issues, and the secondary characters/stories never get the proper fleshing out or emphasis. But the comedy and drama alike feel authentic, and above all, are a delight to experience.

Rating: Three stars (actual rating is closer to two-and-a-half stars, but bumping it up due to the performances of the lead actors).

Unexpectedly Yours is not rated by the MPAA, though my suggested rating would be PG-13, for romantic/sexual dialogue, mild language, and thematic elements.

DISCLAIMER: All image in this review are the property of their respective copyright holders, including (but not limited to) ABS-CBN and Star Cinema. For promotional use only. All rights reserved.